My spies tell me that sat navs are called GPSes in the States, but in spite of my last post about keeping my American vocabulary pure I’m going to write about them as sat navs, because I’m writing about the way they work here. And also because the idea of purity in language is complete and total bullshit and I don’t want to take myself too seriously on this subject.

I needed a spy network to pin down the word GPS because I never needed one when I lived in the U.S. Or, well, yes, I could have used one during the five years that I drove cab, but they didn’t exist yet, so the thought I need that couldn’t exist either.

Not that I’d have spent the money on one.

I’m a technophobe. I’m a techno-I-don’t-need-it, but even I have conceded that in Cornwall I need a sat nav. Or, to be entirely accurate, I don’t need one myself but will steal Wild Thing’s now and then. She’s a major prophet of the Church of We Need All the Techno We Can Get, so this seems (to me) like a reasonable arrangement. 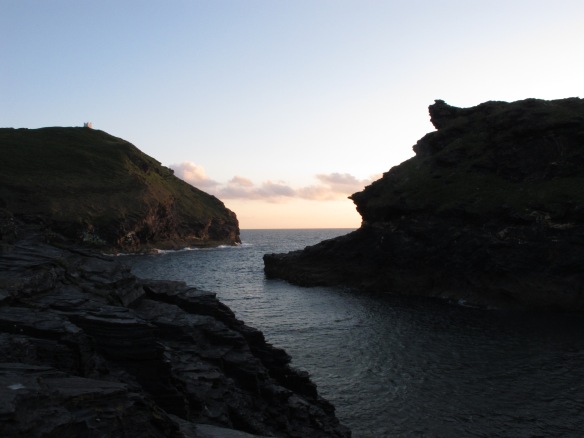 Now in Cornwall, and probably in the rest of Britain, before the invention of sat navs, people would leave home with a set of directions to a place they’d never been before and 70% of them were never seen again. On a dark night, you can see the faint gleam of their headlights passing like ghosts, still looking for a house called Craggy Bottom, which was supposed to be on an unmarked road somewhere off the A39.

The incident that made me a sat nav user was looking up directions to a meeting on MapQuest or Google Maps or something like that and reading, “Turn right on unmarked road.” Which unmarked road? They couldn’t tell me. Because that’s the thing about unmarked roads: They’re unmarked. It’s one thing if a friend says, “Turn after you pass the bungalow with the brown egg box out front,” but internet directions won’t give you that level of detail.

But the second problem’s more serious. In parts of Cornwall, they don’t work. Some years ago, Wild Thing and I were walking the dog past a ford and waved down a guy in a delivery van as he was about to leave a paved (and unmarked) road and go up an unpaved, washed out axle-breaker of a vague memory of a former road.

I don’t think he quite finished the sentence. He had that blank, terrified look of someone who wasn’t taking in anything we said. Part of it would have been our accents—we couldn’t seem any less local if we carried signs saying “We’re not from around here”—and part of it would have been sat nav dependence. The rest, though? When a man doesn’t take in what a woman’s saying, it’s hard not to go back to the words man and woman and think, hmmm.

But never mind. We told him only a four-by-four could handle the hill he was about to go up. We told him he’d wreck the van. He told us the sat nav said.

We shrugged and watched him cross the ford and start up the hill. If a van can look fatalistic, I tell you, his did.

He was lucky. It was a rainy year and the mud was slick, so he didn’t get far enough up the hill to wreck an axle. He slid back, still looking blank and terrified, and he drove back the way he’d come. On foggy nights, I’ve seen his headlights pass me like ghosts, still following directions from his sat nav.

This kind of thing happens all over the country. Sat navs send massive damn trucks down streets that are so narrow they get stuck.  Really they do. They send cars down stairs. Some of the problems you couldn’t predict, but some of them—well, the truly crazy thing is that people do what they’re told. And yeah, I know I shouldn’t laugh but when I see some of the pictures I laugh anyway. It’s the oldest joke humanity knows: Somebody falls down. Follow the link and see if you don’t do the same.

We’re not, all told, a very nice species.

And maybe our sat navs know that, because with the detached serenity of gurus, they’ll spend hours talking us through the mazes we’ve laid down on the surface of the earth and call roads, and then, with no warning, they turn on us. Wild Thing’s first one did it in the middle of the Tamar Bridge—a long, high bridge connecting Devon and Cornwall.

We came out of our sat nav trance and decided maybe that wouldn’t be a good idea, so she escalated.

There really is a lot of water under the Tamar Bridge. And I’m not much good with either heights or water. We turned the sat nav off. It already had a history of going wild when we crossed the moors. If you’ve read the Brontes, you probably know about the moors as a metaphor for something wild and free and frightening, and our sat nav was in tune with all that. It would tell us, “In 18 yards [and it was always 18 yards], turn right.” Or left. In 18 yards, though, there was no road, only hedge. It had an image of us, I guess, breaking loose and driving wild and free across the fields.

Wild Thing retired it and bought a new one whose quirks are more predictable. But even so, near Scorrier both our new sat nav and everybody else’s try to kill people so consistently that the county’s put up a sign, in a panicky set of colors that they use for nothing else, saying, “Turn off sat nav.” The highway entrances were rerouted at some point and sat navs seize the opportunity to send cars the wrong way down exit ramps onto the wrong side of the highway.

So yeah, you need one around here. And you never turn your back on it.

24 thoughts on “Driving in Cornwall: When Good Technology Turns Bad”