Quick answer: Yes. Right now, the village is talking about the weather because it’s spring. Or summer. Or almost summer.

Is this different than what happens in the winter? It’s not. We always talk about the weather. Because we’re—.

What do we say? Well, saying a nice day’s nice is acceptable, but moaning’s got more punch. Because no matter how much the people I know glory in a beautiful day, underneath it all they live on a wet island and it would be unpatriotic to forget that. They believe in cloud, in rain, in damp. Anything else just flits across the windshield of life and is gone. Whatever replaces it will be water-based.

Besides, moaning allows for jokes, even if they’ve all been made before. A beautiful day? Happiness? Where’s the laugh there? 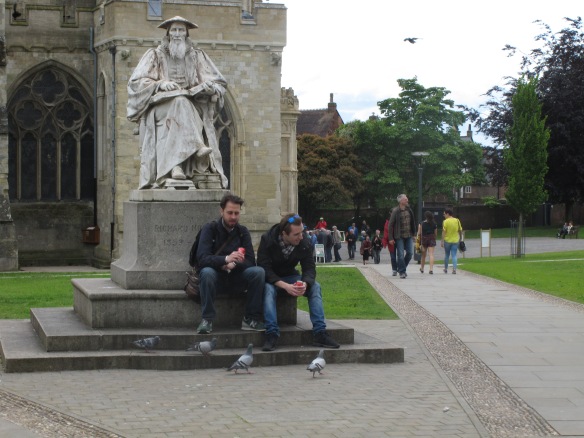 A rare relevant photo: people sitting outside on the Exeter Cathedral close, in front of a statue of someone whose first name is Richard. Oh, okay, it’s Richard Hooker (1554 – 1600). He was a priest. If he swings that foot, he’s going to kick someone.

According to Kate Fox, whose book Watching the English I haven’t quoted in entirely too long, moaning is an English (and by extension, and I hope I’m not wrong here, British) passion. She admits that the English aren’t the only people who moan but describes a form that she believes is uniquely English: “a sort of grumpy and apathetic stoicism; complaining…in a resigned manner, without any real expectation that things could be improved.”

And the weather’s perfect for that. We could complain about the government but we could—and surely we eventually will—dump the current one and complaining about it might nudge us toward action. But the weather? What can we do about that? Moan. Laugh. Put on a raincoat.

So moaning about the weather brings together two national passions. Or quirks. Or—well, I believe the technical term is whatever.

How does that work in practice?

The other day, G. and I saw each other on the road early in the morning. I was walking the dogs. She was walking herself. We traded a few words about how beautiful the day was, and what a gorgeous part of the day the early morning is. We were both happy, or at least we gave a damn good impression of it.

Before long, we were trading updates on our aches, our pains, the various ways we’re less able than we once were, and she mentioned the percentage of over-50s in Britain who have osteoarthritis. It might have been 70% or 85%. In fact, it might have been people over 60, not 50. But it involved numbers, that much I’m sure of, and they were ear-catching ones, even if they didn’t catch well enough to stay with me.

Don’t you just love how much you learn here?

Her point was—and I’m paraphrasing wildly, because she didn’t go all pseudo-poetic about it—that the damp draws arthritis out of human bones the way the sun draws sprouts out of seeds. So Britain breeds arthritis. We exchanged a few more bits of ache-and-pain news and went on our way fortified by the knowledge that we’re doomed. We were oddly cheery about it, and I suspect that’s a British thing as well.

Then I drove to Exeter, where I had some errands to run before I turned around and drove home without passing Go or dropping in on the friends Wild Thing and I usually see when we’re there. And I noticed something: This damp island is a place where people sit outside a good chunk of the year, and look forward to it. It’s a place where a sizable chunk of the population thinks of the outdoors as one of the places they live their lives, not just a place they hustle through between work, home, and grocery shopping.

To someone who spent forty years in Minnesota, that means the climate’s kind. Yes, it’s wet, but it’s not trying to kill you all winter. And while we’re at it, it’s not thinking about whether to give you heat stroke during a good part of the summer. I exaggerate very slightly, and only about the summer. The winter? It can kill you and if seasons had emotions it would be happy to. Leaving the house during a Minnesota winter is like suiting up to step out of the space station. I used to think I’d be a completely different person if I could just grab a jacket and walk out the door.

Here In Cornwall, even in the winter, people will sit outside. Not as many of them as in summer and not as often, but on a dry day it’s possible and people do it. One of the cafes in the village sets out a stack of blankets for people to wrap up in, and even if we look like patients at a pre-antibiotic TB sanitarium, we soak up some sun—or at least some not-rain—and feel better for it.

And still, the nation’s core belief is that the climate’s miserable. And bad for us.

I get swept into that, even though I don’t really believe it. Because at the same time I sort of do. We’re social creatures. I’ve been captured by the thinking around me. But for someone who’s officially miserable about the weather, I’m surprisingly happy. I’ve turned out to be the same person I was in Minnesota, but in some non-weight-related way I’m a lighter version of her.

48 thoughts on “Do the British really talk about the weather?”