I wasn’t going to write about this. Notes isn’t a political blog. And it isn’t a sex blog. But then it occurred to me that what we have here is a particularly British political scandal and—well, I’ve talked myself out of posting this several times, and then talked myself back into it. But it looks like I am going to post it, so I’ll paste an, um, awkward position warning on it and leave it up to you whether to read on.

C’mon, how many of you are really going to stop there? 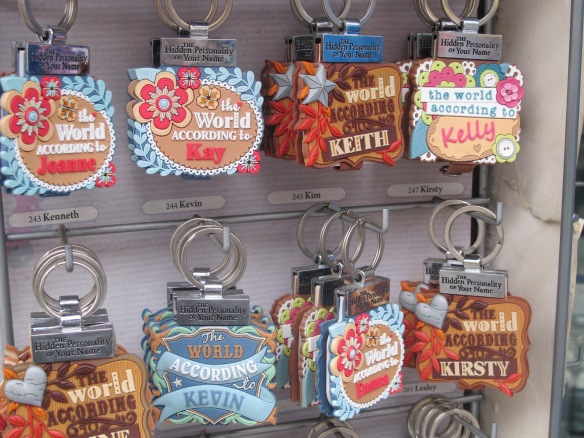 Since we’re on a tacky subject, I thought I’d toss in a photo of tacky stuff on sale in Swannage last summer.

Our story begins before the British 2010 election, when Lord Ashcroft—who probably has a first name but doesn’t need to use it because, good lord, he’s a lord—gave some money to the Conservative Party. And when I say “some,” I mean something in the neighborhood of £8 million. (“As you do,” as people here like to say when you couldn’t even remotely.) But when the Conservatives came close enough to winning the election to form a coalition government with the Liberal Democrats, the new Prime Minister, David Cameron, didn’t offer Ashcroft the kind of post he (that’s Ashcroft) believed he (that’s Cameron) had promised him (that’s Ashcroft again).

Well, the good lord isn’t a good enemy to have, because he started work on a biography of Cameron, and bits and pieces are now being leaked to the press. I’m coming late to this story, so when I say “now” I mean last week, but that’s close enough between friends, right? One of them claims that Cameron had sex with a pig.

Well, simulated sex. And the pig was dead at the time, for which I’m grateful. I’m sure the pig would have been as well if it had been in any condition to register an opinion. The exact description is that he put “a private part of his anatomy” in the pig’s mouth.

And then ran for office? Well, yes but not right away. This happened when he was still a student at Oxford, a university that as far as I can tell gathers up not only the most brilliant students but also the hopelessly over-privileged ones, and the folks in that second category apparently can’t find anything better to do with themselves than join bizarre clubs that—well, put it this way: If daddy and mommy didn’t have so much money they’d find their asses in jail for carrying on that way but since daddy and mommy do they not only get away with it, they think it’s their right.

That business about jail? That’s not about the pig, it’s about the vandalism one of the clubs is known for.

Then they go on to run the country and look smug on television. And lecture the rest of us on how to behave.

Now that this is leaking out, #piggate is all over Twitter. I mean, who can resist? The real scandals in our lives—the financial shenanigans, the political dittos, the backroom deals that bring the two categories together? Most of us can’t make heads or tails of them, even when they bring down the economy or bankrupt a country or two. But a sex scandal? Oh, hell yes. We’ll read every inch of type about that.

I’ve given you one link to a newspaper article, but they’re endless. If you want more, you’re on your own. In the U.K., all you have to do is google Cameron and pig. In other countries, you may need to add U.K.

Now I’m not claiming that no American politician ever got up to some kind of antics, sexual or otherwise, in college or afterward, but I’m guessing they never joined a (n allegedly) secret society whose initiation ceremony involved simulated sex with a dead pig. It puts the Clinton-Lewinsky scandal to shame for its lack of imagination. The adage in American politics used to be that you never wanted to get caught in bed with a dead girl or a live boy. Which tells you (a) how much times have changed and (b) how boring American sex scandals are.

Please tell me if I’m wrong about that. Or tell me anything else that seems appropriate. Or, given the topic here, inappropriate. The world’s a far stranger place than most of us imagine.