Cornwall’s rich in wildflowers. And that’s good, because wages in the county are low, so it’s good to be rich in something–even something that doesn’t pay the rent.

In response to a recent post, Dan Antion asked me to say more about one of them, alexanders, which he noticed in a recent irrelevant photo. Breaking all my self-imposed blogging rules, I’ll repeat the photo below, even though it’s now relevant.

(I don’t actually object to relevant photos, I just object to the effort it takes to come up with them when they don’t present themselves naturally.)

Here’s what I’ve been able to learn about the plant:

Alexanders tend to grow near the sea, because (according to Collins’ Wildflowers) they’re “probably more sensitive” to frosts.

Probably? Doesn’t the author know? He’s writing a plant book. He’s supposed to know this stuff. And more sensitive than what? Tropical lizards?

Never mind. We’ll have to settle for learning what we can here, then moving on. 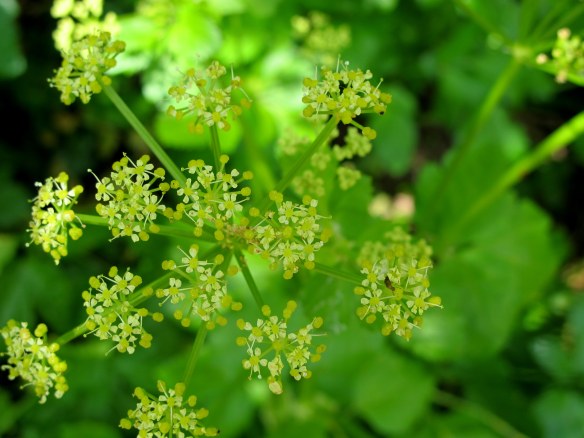 Alexanders flower from April to June and were “formerly grown as a herb, and used in cooking like Celery.”

Why is celery capitalized? Because it’s a Plant and this is a Plant Book and it’s not uncommon in British English to capitalize Words in the middle of Sentences. Especially when they’re Nouns and strike the Author as important. ( I so want to capitalize important, since it’s important, but it’s not a noun, so I’ll restrain myself.) I don’t think it’s the approved style—newspapers and books don’t mess around that way for the most part—but if you get out into the real world, where the rules of grammar and punctuation and all that other good stuff don’t necessarily apply, you’ll find a lot of capital-happy people.

It’s not that we don’t do strange stuff with the language in the U.S., but that doesn’t happen to be the strange stuff we do. Unless we’re talking about corporate or organizational writing, where suddenly all sorts of Committees and other nounish things get capitalized because they’re important and we don’t want anyone to forget it.

Why does the quote read “a herb” instead of “an herb”? Because the British pronounce the H in herb, making it sound like the short version of Herbert.

Any number of first names don’t cross the Atlantic, and some of the ones that do change genders in mid-ocean.

But back to pronunciation. Americans don’t pronounce the H in herb, so it sounds like a city: an urb, just screaming for an N before the A.

Actually, none of that is on topic. We’re talking about plants.

Field Guide to the Wildflowers of Britain says the plant’s called alexanders  because it’s “a herb of Macedonia, the country of Alexander the Great.” In the seventeenth century, the seeds were sold by apothecaries to cure flatulence and snakebite and to warm a cold stomach.

No, I don’t know what warming a cold stomach means either. Medical writing of that period doesn’t translate well to our understanding of how the body works.

The whole plant’s edible—the stems can be eaten like asparagus, the flower buds in salads, the roots like parsnips, and the dark green leaves “can be made into a white sauce or used as a herb.”

The plant’s a member of the parsley family.

For some reason, even one lone sample of the plant gets a plural name, as in “alexanders is very confusing.” But the Field Guide doesn’t capitalize random nouns, so let’s trust it on the pluralish name.

The Wildflowers of Britain and Ireland says alexanders were also called horse parsley, black pot-herb (from the color of the seeds), and heal-root. The Romans called it the parsley of Alexander (except of course they called it that in Latin, and that was especially useful since English hadn’t been invented yet) and brought it to Britain with them to use as both a spring vegetable and a medicine. It not only warmed a cold stomach (and I’m not sure if we’re talking here about the way the Romans used it or if we’re back in the seventeenth century), it expelled an afterbirth, broke wind (or, presumably, caused a person to, since being of the vegetable persuasion it couldn’t do that for itself), and provoked urine.

Me? I’d be nervous about provoking urine. I’m not sure what it does once it’s mad at you.

It also did a few other things—or at least it was believed to. Sailors used to put ashore and collect it because it was believed to cure scurvy. I expect they were right about that, since they would have been highly motivated to observe its effect.

It was popular in kitchen gardens until new varieties of celery were introduced.

The tops can be pickled.

All the books that address the question agree that if you’re eating the plant it should be cut early—before the buds open. So I’m too late to taste it for you this spring. And by next year you’ll have forgotten all about it.