May Day swept past weeks ago, but that won’t stop us here at Notes. We’re not so small-minded that we’ll be bothered by a little thing like the calendar. I learned about the Oxford May Day celebrations from a newspaper photo and caption, and the clipping just rose to the top of the swamp I call my computer table. So let’s slip back in time.

Oxford celebrates May Day in traditional style, and Britain takes its traditions seriously. At 6 a.m., the Magdalen (pronounced Maudlin; don’t ask; no answer will make sense of it anyway) College choir sings “Hymnus Eucharisticus” from the Great Tower as the sun comes up.

A quick reality check before we go on, though: The sun came up at 5:36 that day. I just looked it up. But who am I to argue with tradition? 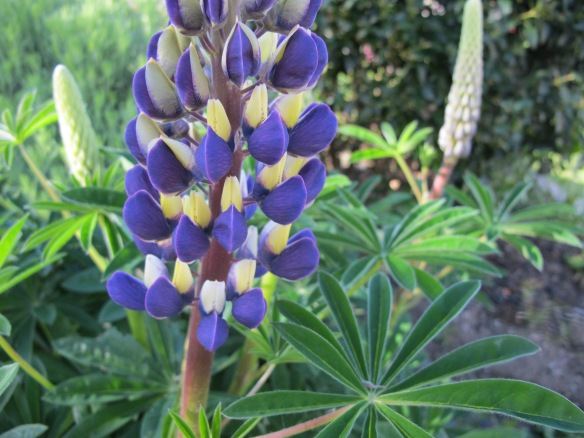 Marginally relevant photo: This is a flower–a lupine if you want to be specific. May Day has to do with the coming of summer, when flowers bloom. I know, it was a stretch, but we got there.

According to one source, the choir has been doing this for 500 years. Presumably not with the same singers. According to another source, the song was composed in the 17th century. I just counted on my fingers and that would make it 400 and some years old (probably—we can’t trust my fingers when they’re counting stuff), but if tradition says it’s 500 years old and the sun’s just coming up, okay, it’s 500 years and the sun just rose. See its little red dome poking over the horizon?

Yes, England is a cloudy country. That’s why it can have a 500-year-old tradition and in all that time never notice that it’s mis-timed the sunrise.

After the song, the bells ring out for twenty minutes and everyone goes deaf.

Sorry, that’s “approximately twenty minutes” and everyone goes deaf. I don’t want to misrepresent this.

After that, there’s morris dancing on the streets, breakfast in cafes and pubs all over the city, and if I’m reading this right, a whole shitload of drinking, which starts the night before and continues until everyone falls over. Or (see below) jumps into the river.

Samba was introduced to Britain in the 1980s by, among others, the passionate anti-apartheid activist Steve Kitson. Since then, Britons have been dancing it so intensely that by now it’s been going on for 500 years.

Magdalen (pronounced—oh, one way or another; I’ll get to that in a minute) Bridge is closed to traffic from 3 a.m. till 9 a.m., but it’s open to pedestrians. In the 1980s, people started jumping off it into the river Cherwell, and in 2005 some 40 people were hurt, including one who was left paralyzed. The river can be low at that time of year. The city works madly to discourage jumpers. Some of whom have been drinking for 500 years by then.

I’m going to be deeply discouraged if someone convinces me that the song really is 500 years old and that the sun rose at 6. In the west.

62 thoughts on “British traditions: May Day in Oxford”