When Wild Thing and I became British citizens, we had a choice of swearing our allegiance or affirming it. Swearing is religious, of the so-help-me-god variety. Affirming isn’t, and I appreciated having a choice. I grew up in the U.S. with assumption that if I ever had to testify in court I’d have to swear on a book and by a god I don’t believe in if I wanted to be taken seriously. It was the American way.

What made me think that? I watched TV. If that didn’t make me an expert, I don’t know what it’s going to take.

A quick troll through the Great Google informs me, though, that in the U.S. you can actually choose to affirm instead of going with the default setting of a bible-based oath. You can also request a different religious book. But any of those choices call attention to your choice, and I can’t help wondering if whatever you say will be taken less seriously. 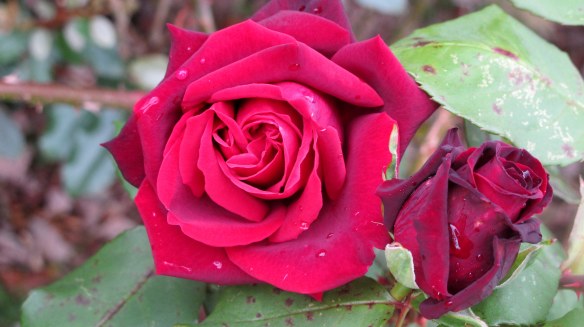 Irrelevant photo: If I’d mentioned the War of the Roses, I might’ve tried to slip this in as relevant, but this is the only place in the post that it gets a mention. (It’s also out of season.)

I’m prepared to be as much of a hypocrite as anyone else if it’s in a good cause, such as having my testimony taken seriously, but I’d prefer to be taken seriously without the need to lie. And yes, I’m aware of the irony of being willing to lie in order to convince someone I’m telling the truth.

The Quakers, I’ve read, refuse to take religious oaths on the grounds that they’ll tell the truth in court as they do in the rest of their lives.

I’ve never had to testify in court except when I got divorced, and I as far as I can remember I didn’t have to swear anything then. What I had to do was say there were no repairs to be made to our marriage, which was more than true.

Oh, and I testified twice in small claims court, which doesn’t quite count.

Anyway, I appreciated being given the choice. I affirmed, and that involved enough hypocrisy, since the allegiance I was being asked for was to the queen and her heirs and successors—they’re covering all bases there—and however crazy the world’s going at the moment, I still can’t see that going back to or maintaining existing monarchies improves the situation. But no one told us what definition of allegiance they were working with, so I managed to find enough room to wiggle my misaligned and complaining belief system into the idea.

No one asked what any of us believed. No one much cared.

Members of Parliament can also either swear (they have a choice of holy books) or affirm (on thin air) their allegiance to the crown, and they can do it in English, Welsh, Gaelic, or Cornish. Since not all MPs even remotely support the crown, they’ve done some interesting things with the oath. Tony Benn added, “As a committed republican, under protest, I take the oath required of me by law.”

Dennis Skinner’s oath was even better: “I solemnly swear that I will bear true and faithful allegiance to the Queen when she pays her income tax.”

Tony Banks took the fully adult path of crossing his fingers when he took the oath.

Several attempts have been made to change the oath to something more neutral—to discharge the responsibilities of the office to the best of one’s ability, or to bear “true allegiance” to the people of the United Kingdom—but so far they’ve failed.

In 2017, any number of MPs said they were taking the oath only in order to serve their constituents, and by implication protested having to take it. But MPs can’t debate or vote (or, ahem, get paid) until they go through the ritual, so they have to swear or affirm something. Sadly, no one in the 2017 intake said anything sparklingly funny, although some did protest in various ways. I won’t quote them.

Whoever’s in charge of overseeing oaths doesn’t seem to be in a mood to toss MPs out for messing around with the wording. The feeling seems to be, Hey, let’s not push our luck here. As long as an MP goes through the motions—any motions—that’ll do.

All this swearing and affirming has its origins in the Magna Carta, which was signed in 1215, following an aristocratic rebellion against King John. Neither side took the Magna Carta seriously. The king was using it as a stalling tactic, and although the tradeoff the rebel barons agreed to was surrendering London, they didn’t. Its important impact was long-term: The crown became subject to the law of the land for the first time in English history and the rebels swore allegiance to the crown. It all, quite incidentally, paved the way for a series of oaths that became standard for servants of the crown and members of the judiciary.

As time passed, the hot-button issues of the moment have been added to the oaths people had to swear in order to take their posts. They’ve had to renounce the Pope, or repudiate the claim to the throne of the heirs of James II, or promise to support the Hanoverian succession.

The early oaths were elaborate. Saying “heirs and successors” wasn’t enough to cover all bases, they also had to meander through a bunch of synonyms for swearing Under James I, the first sentence begins, “I, [whoever you are], do truly and sincerely acknowledge, profess, testify, and declare in my conscience before God and the world….” It goes on to say that James is the “lawful and rightful” king and that the Pope is just some old guy sitting on a fancy chair in Rome and wearing funny clothes.

And so on, for the rest of a long paragraph.

Do you get the sense they were still feeling a touch insecure about something?

I start to understand why the thesaurus was invented. Truly and sincerely. Acknowledge, profess, testify, and declare in my conscience. Lawful and rightful. They wanted to close every possible loophole.

Under George IV, the focus shifted to defending him against “all Conspiracies and Attempts whatever, which shall be made against his Person, Crown or Dignity,” and to protecting the Protestant religion. It ended with, “And I do solemnly, in the presence of God, profess, testify, and declare That I do make this Declaration, and every Part thereof, in the plain and ordinary Sense of the Words of this Oath, without any Evasion, Equivocation, or mental Reservation whatsoever. So help me God.”

Oh, and I don’t have my fingers crossed.

31 thoughts on “Swearing, affirming, and the Magna Carta”