The problem with  history is that everything depends on everything else. The 1800s depend on the 1600s, which depend on–oh, hell, my math is terrible–whatever came before them, and so on until you fall off the edge of history and find you’ve been dumped in archeology and geology and anything else that might fill in a few blanks.

And it doesn’t just work backwards. It works sideways. British history depends on Irish history, on Kenyan history, on U.S. history, on Maori history, on French history, and on every other history you can think of. But I’ve been writing about British history here as if we could separate it from everyone else’s. We can’t, and at the same time if we don’t it’ll all get so convoluted that we–or at least I–will end up curled in the corner and gibbering to myself.

Still, let’s pick up a bit of European history, since somewhere along the line we lost track of it. Which bit? The Crimean War, where Britain and bits of Europe collided conveniently. It’s improbable enough to be a nice fit here. 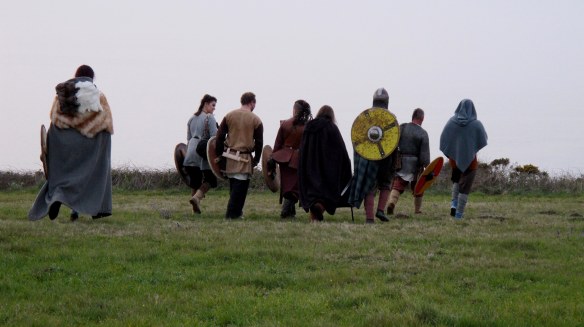 Marginally relevant photo: Re-enactors, out for an evening’s practice. Whatever battle they were re-enacting took place well before the Crimean War. Unfortunately, I didn’t catch the guy carrying two genuine Dark Age (I’m guessing at the era) plastic bags. but two bags of whatever for eight people means these folks were better supplied than the soldiers who fought in Crimea.

We’re looking at a moment when Victoria was on the throne. Britain had an empire and was feeling very pleased with itself, thanks. The only problem was that other European countries were out there maneuvering for–well, stuff. Power. Colonies. Raw materials. Markets. Empire, in fact, because running an empire’s a lucrative business. They wanted the same kind of stuff that Britain had, or even the exact same stuff that Britain wanted to keep to itself. Or if possible, get more of.

Until some heavy-elbowed country leaned on the table and all the drinks spilled because one leg was always shorter than the other three, so everyone started fighting again.

The trouble started this time when France and Russia decided they had to defend the rights of Christian minorities in Palestine, which was part of the Ottoman Empire. Which was Muslim.

Russia took the side of the Orthodox believers and France of the Catholic. Then France got bored but Russia didn’t and in 1853, it marched into a bit of Ottoman territory, the Danubian Principalities, and the Empire Struck Back, declaring war.

At this point we’d probably be safe to forget about the Christian minorities in Palestine, because they weren’t the point anymore–if they ever had been–and taking a different bit of Ottoman territory wasn’t going to do them any good. This wasn’t entirely–or even mostly, or possibly at all–about religion or the people who believed in the various religions. Russia looked at the Ottoman Empire, which had been around for a long time and was past its peak, and thought, Yum, I could have part of that. And Britain and France looked at the Ottoman Empire and thought, Oh, shit, if Russia gets part of that, it’ll control the Dardanelles, which is the passage from the Black Sea (and just incidentally the site of Russia’s only warm water port) to the Mediterranean.

Think of the Ottoman Empire as the cork for the bottle where Russia’s fleet was moored.

Russia did have northern ports, but the thing about the north is that it’s cold up there. Russia’s northern ports iced over all winter. That’s a problem for ships, which are designed for water.

So Britain wanted to keep the Ottoman cork on hand to bottle up Russia’s Black Sea fleet. Plus the Ottoman Empire was a good trading partner. It exported raw materials to Britain and imported manufactured goods from Britain, which was just the kind of relationship Britain had gotten rich on. Or one of the kinds, but let’s keep this simple.

In case that wasn’t enough by way of reasons, if Russia expanded in an Ottoman-ward direction, it could hippity hop through Afghanistan–which we all know is hospitable to invaders–and into British India. Which would not be good for Britain.

So when Russia seized Ottoman territory and the Ottomans declared war, Britain and France came in on the Ottoman side. Before long, Britain, France, the Ottoman Empire, and Sardinia were all fighting Russia and everyone was cranking up a patriotic frenzy at home.

The allied plan was to seize the Russian naval base at Sevastopol, on the (you knew this word would come up eventually) Crimean Peninsula, and be home in three months–long before the good folks there ran out of frenzy.

You know how that sort of prediction works out.

After a glorious first battle, the attack bogged down and the allies laid siege to Sevastopol. On two sides. Or possibly on one side. It depends where you want to draw the line between one and two, since they weren’t working with a square. The allies were to the south. That meant the Russians could come and go from the north and east.

Why couldn’t the Russians come and go from the west? It’s a good question. I’ve looked at maps of the siege and I’m prepared to testify that west was present throughout and located roughly where it is to this very day. Never mind. We don’t do military detail here. What matters is that this was a leaky siege, and even someone who knows nothing more about military strategy than how to spell it–and I offer myself as an excellent example of the species–could have told the allies they’d built a problem into the plan.

So everything bogged down and eventually the Battle of Balaclava took place, which included the Charge of the Light Brigade–a maneuver so disastrous that it’s celebrated in national memory and was awarded capital letters and a Tennyson poem full of thumping repetition and lead-footed rhymes glorifying if not exactly the charge’s stupidity, at least the soldiers’ suicidal obedience:

What happened was that the Light Brigade was given an ambiguous order, did what they may or may not have been meant to do even though it was clearly nuts, and got shot at from both sides of a valley as they charged through it. In twenty minutes, forty percent were killed or wounded.

Tennyson also wrote a poem about the Heavy Brigade–the Light Brigade’s big brother. It was a flop and their more successful battle is mostly forgotten. I mention that in part because when I was a kid I thought the Light Brigade carried torches. So everybody could see their way, I guess. It didn’t make a lot of sense to me, but mine not to reason why. I couldn’t quite put a question together.

So what, other than the fact that it happened and that I wanted to write about something in the nineteenth century, makes the Crimean War worth spending time on?

First, the telegraph was up and running, making it was the first war to receive on-the-spot coverage, notably from W.H. Russell, writing for the Times. At an early stage of the war, he wrote, “The French, though they had tents, had no cavalry; the Turks had neither cavalry nor food; the British had cavalry, but they had neither tents nor transport, nor ambulances nor litters.”

The Turks, by the way, were the Ottomans. You can call them either one and be reasonably right.

The allies’ planning was stunningly bad. What they did have in plentiful supply was contaminated water. The causes of cholera weren’t yet known for certain, but the planners created perfect conditions for it. Disease–not just cholera, but a basketful of them plus badly treated or untreated wounds and malnutrition–killed four times as many soldiers as battle wounds did. Or ten times. It depends–as it often does–on who you ask, and probably which army or armies they’re counting. Four may be the more reliable number, since it comes up more often. Either way, though, many more soldiers died of illness than in battle.

Russell’s reports, along with the sketches of William Simpson, dragged the brutal reality–as opposed to the patriotic glory–of the war into the news, which pissed off Prince Albert, who didn’t think the general public should be in on this sort of thing. They also brought down a government.

This is not unconnected to the second reason the war’s worth our time: The government got desperate enough about the public uproar to send women to the Crimea as nurses. The situation they found was beyond grim. In the hospitals, soldiers lay on bare floors and got no more than one meal a day–which is to say, there would have been times when they got less than one. Some were left to die with no medical attention and no painkillers. Others had their wounds bandaged once and were then put aside and forgotten. Sanitation was nonexistent. So were toilets.

Into this mess waded the celebrated Florence Nightingale, the nurses under her leadership, and the until recently widely forgotten Mary Seacole, bringing order, compassion, medical treatment, and food–not to mention basic sanitation.

They were anything but welcome. The doctors wanted no part of Nightingale and her nurses. Sent by the government or not, they were women, for the love of Mike. What did women know? This was a place for men by men who were out there being men. And if there’s one thing men don’t need it’s sanitation and being fussed over.

And Seacole? She wasn’t just a woman, she was a black woman. She’d had to pay her own way to the Crimea, because the British government refused to send her, and once she got there she had to elbow her way into a position where she could do essentially the same work as Nightingale but separately, since the sainted Flo didn’t welcome her help either.

Their lasting legacy was the professionalization of nursing and the introduction of basic sanitation to hospitals.

And the legacy of the war? In 1855, the Russians abandoned Sevastopol. Eventually everyone negotiated yet another treaty and went home. But the table still had one short leg. The countries of Europe (which included Britain, even then) still had heavy elbows.

World War I spilled even more drinks. And more blood. And prepared the ground for facism and World War II.

Don’t you just love history? It makes a person feel so optimistic.

81 thoughts on “The Crimean War: Europe sits down at a wobbly table”