Boris Johnson–that most improbable of prime ministers–has announced that he’ll be sending Parliament home for five weeks so it can sit on the naughty step.

Why? To keep it from getting in the way of his Brexit plans. That’s called or proroguing Parliament. The word’s from Latin (prorogare) by way of Old French and it meant to extend. These days it means the opposite of extending: It means ending a session.

Progrogation isn’t unprecedented. It was last done in 2017 for a general election, and that’s the way it’s normally used–apolitically. One parliamentary session ends to make way for another. This prorogation is different because it’s being used for political ends.

Any bills that are still in the works when Parliament packs up its toys and goes home will lapse, so what Johnson’s hoping is that any attempt to block a no-deal Brexit will either not have time to work its way through the Commons obstacle course or will get to the Lords and be filibustered there until it dies. That would leave him a free hand to do whatever he wants.

All of which is ironic, because one of the rallying cries for Brexit was taking back Parliament’s sovereignty. 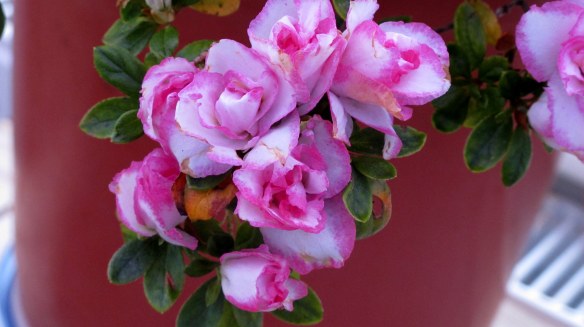 Irrelevant photo: This has nothing to do with anything, and it’s not even in season. I just thought we might all need something nice to look at by now.

In response, the pound dropped against the dollar. An online petition against suspending Parliament gathered over a million and a half signatures in just a few days, although I’m not sure if anyone in power cares. The head of the Scottish Consservative Party resigned (officially to spend more time with her family). Since she led a Conservative revival in Scotland, that’s particularly awkward.

For some time now there’s been talk about Scotland leaving the UK if the UK leaves the EU. The talk seems to be getting louder.

Three separate lawsuits have been filed to block Johnson’s move. In one of them, they’ve called for Johnson to state, under oath, why he needs to prorogue parliament. John Major –he was a prime minister himself, and from the Johnsosn’s own party, the Conservatives–has asked the High Court’s permission to join one of lawsuits.

Some fifty MPs have announced that they won’t be sitting meekly on the naughty step, they’ll continue to meet during any suspension. They include members of the Conservatives, Labour, the Liberal Democrats, the Scottish National Party, Change U.K., Plaid Cymru, and the Greens.

The civil service is said to be demoralized. An unnamed former senior official told the Guardian that one thing “making people want to leave is the realisation that they’ll have to spend ten years cleaning up the mess” of Brexit. Another is that they feel their work is “no longer purposeful” because Brexit has strangled all other policymaking.

The head of planning for a no-deal Brexit at the Department for Exiting the European Union has resigned, which strikes me as particularly disquieting. And Robert Kerslake, a former head of the civil service, warned officials that they need to consider putting their “stewardship of the country ahead of service to the government of the day.”

John Bercow, the Speaker of the Commons, has denounced the suspension of Parliament as a constitutional outrage and Philip Hammond (another big name from the Conservative Party) has said it was profoundly undemocratic.

Johnson’s defense secretary, Ben Wallace, said, “Our system is a winner-takes-all system. If you win a parliamentary majority, you control everything.”

The government promptly announced that he didn’t really mean that.

To sum up, Johnson has very nearly managed something his opponents haven’t been able to do, which is to unite them. What happens next is anybody’s guess.

In the meantime, this morning’s paper (I’m writing this on August 31) announced that sometime in the next couple of weeks, compasses at Greenwich will point to true north for the first time in 360 years, give or take. True north and magnetic north are sort of like the opponents of a no-deal Brexit: They’re not always in alignment. So this is a big deal, if not necessarily an omen.

In other parts of the U.K., the two may not line up for another twenty years. And that’s not necessarily an omen either.

93 thoughts on “The Brexit update–again”