Almost everyone in the English-speaking world (she asserted on the basis of no evidence whatsoever) grew up on stories about Robin Hood, that dashing outlaw of Sherwood Forest who fought the Sheriff of Nottingham and assorted other medieval baddies, who stole from the rich to give to the poor, and who did it all while looking fabulous in green tights and a nifty little hat with a feather.

Yeah, that Robin. You’ve met him in movies, in comic books, in novels. His arrow never missed its target, his tights never bagged at the knee, and his merry men never got cold or hungry or even wet, living out there in the forest.

Was he a real person?

Hmm. Probably not–or at least there’s no evidence that he was. The giveaway is those tights that never bagged or sagged. Who thought that was possible?

But let’s take a quick run through the legends and see what we’ve got. 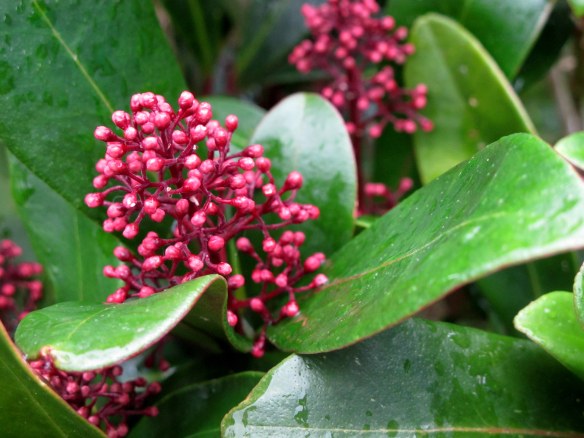 Irrelevant photo: no idea what this is called, but it adds some color to the winter.

The first mention that’s come down to us is in a 1377 manuscript that’s now in the British Museum, In this version he was born around 1160 in South Yorkshire, in Lockersley, which might well be modern-day Loxley.

But don’t get too attached to that. In another manuscript, he’s from Wakefield and fought in Thomas of Lancaster’s 1322 rebellion. The manuscripts do at least agree that he’s a northerner.

When you go into documents from the period, you’ll find an assortment of outlaws called Robin Hood, or called variations on the name. There’s one to be had in 1226 and another in 1354, and that seems to be a fairly random selection. It may have been a name many outlaws called themselves. Probably after watching too many movies, or possibly listening to too many ballads, because Robin may have been someone troubadours sang about. In Piers Ploughman (written in the late fourteenth century, a bit before The Canterbury Tales), a character says he knows the rhymes of Robin Hood.

In the fifteenth (or sixteenth; I’ve seen both cited) century–and for all we know, earlier (or later; don’t ask me)–a Robin Hood-like figure showed up in May Day celebrations and took on an almost religious cast. Whatever that may mean. I couldn’t find anything more than a passing reference to that, and an assertion that it was the May Day games that kept the legend alive so that it came down to us.

In his earliest form, Robin wasn’t a disaffected aristocrat but a commoner–a yeoman, which meant he was higher than a peasant but lower than a knight–and he treated the rich and powerful the way they treated the poor and powerless, which is to say he beat them, robbed them, and killed them. This wasn’t a sentimental era. Doing that would’ve made him an attractive figure.

It’s also in the fifteenth century that Robin starts to rob from the rich and give to the poor. In the Geste of Robin Hood, he says, “If he be a pore man, / Of my good he shall have some.” He makes rules about who can be beaten, robbed, and killed (bishops, archbishops, the Sheriff of Nottingham) and who can’t (peasants, yeomen, virtuous squires).

In this century, Robin not only kills the Sheriff of Nottingham, he:

Why was Robin an outlaw? In early versions of the tale, he just was. It may have been so easy to transgress the law that no explanation was necessary. It’s only later that explanations start to turn up. For what it’s worth, just by living in Sherwood Forest, he would have been breaking the Law of the Forest, which kept people from putting the woodland to any productive use so the nobility could hunt in it. Acts forbidden to commoners included (but weren’t limited to) hunting, carrying a bow or spear (gotcha there, Robin), and cutting wood.

Scholars can have all kinds of fun aligning Robin with assorted breakdowns of order and conflicts in English history: the conflict between the Anglo-Saxons and the Normans; the twelfth-century civil war later known as the Anarchy; or the fourteenth-century Black Death, Hundred Years War, and Peasants’ Revolt (it was a tough century). Not being scholars and not having to convince anyone that we know what we’re talking about, we can nod sagely at all of that and go on our merry way. Or we can write novels setting Robin in the middle of any of it and still sit safely at home eating ice cream.

In early versions of the tale, Robin grew old enough to become ill and went to Kirklees Priory, where his aunt was the prioress, to be treated, but Sir Roger of Doncaster–whoever he may have been–convinced her to kill him and instead of just bleeding him (which was a respectable way to treat the sick) she bled him to death. As loving aunties sometimes will with inconvenient nephews.

You have  been warned.

By the sixteenth century, Robin had been domesticated by the nobility, although they weren’t in a position to offer him ice cream, so you should be able to outbid them if you want him in your novel. All they could offer was a promotion from yeoman to noble–something they must’ve felt they had to do if they were going to keep company with him.

And keep company with him they did. In 1516, Henry VIII and Catherine of Aragon’s May Day festivities featured a couple of hundred men dressed in green and one dressed as Robin Hood to lead them to the feast.

This is when other characters start to appear: Maid Marian, Friar Tuck, all those folks. One article speculates that Maid Marian was introduced after the Reformation to make up for Robin’s devotion to the Virgin Mary having been edited out.

It doesn’t make a lot of sense but that’s not to say it’s impossible.

What does it all mean? An outlaw hiding in the wilds (Robin in the forest, Hereward the Wake in the fens) and wreaking vengeance on the arrogant and powerful is a powerful part of English lore. It’s natural enough that it would resonate commoners, especially peasants, who had little enough outlet for their frustrations. They couldn’t take vengeance themselves, so bring on the lurid tales.

Why it was taken up by the nobility is anyone’s guess. This is pure speculation, but I wonder if by Henry’s time they hadn’t tied themselves up with so much protocol and good manners that pretending to be an outlaw living wild and unwrinkled in the forest, answering to no one, bound by no one’s rules, and never missing a shot would have appealed to them.

In recent times, Robin’s been played by everyone from Errol Flynn to Daffy Duck and Kermit the Frog.  That at least needs no explanation.

113 thoughts on “The search for Robin Hood”