In early March, with northern Italy beset by the corona virus, a winery in Castelvetro had a problem with one of its valves and ended up sending lambrusco into the kitchen sinks and showers (and, presumably, bathtubs) of twenty neighboring houses. The leak lasted three hours–long enough for the neighbors to bottle a fair bit of wine.

No one’s demonstrated that it cured the virus, but it did keep twenty families occupied and happy for a while.

The British papers reported a rush in the U.S. to buy guns and ammunition in the face of the corona virus. “Why?” people here asked, since American gun culture’s a foreign language to them. “You can’t shoot the bug.”

As the interpreter of all things American, I had to explain: “It’s to protect their toilet paper.” 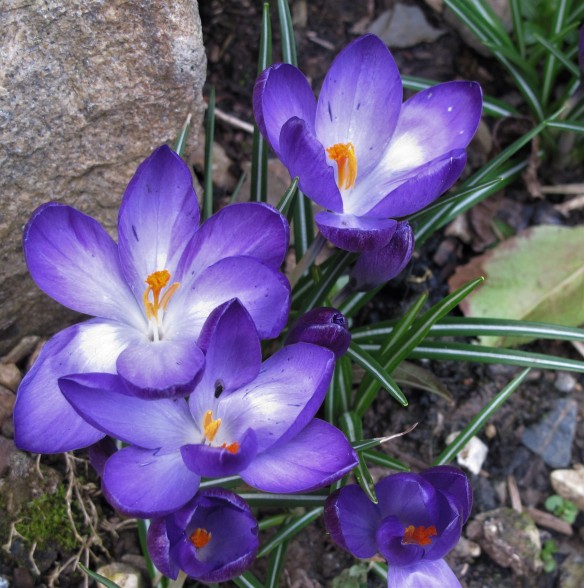 Irrelevant photo: Crocuses. They’re not afraid of the corona virus.

I knew the Covid-19 epidemic was serious when I heard that EastEnders–that essential BBC soap opera–had suspended filming. I’d have thought the world was ending, but they making box sets of dramas available to get people through their isolation. They’re also using local radio stations to coordinate volunteers offering to help the elderly–and I hope other vulnerable people, but that’s not what the new story I read said.

Two notes before I move on: 1) The definition of elderly is “older than me,” even though they seem to have mistakenly asked me to stay out of everyone’s way so I don’t get sick. 2) I am not now watching nor have I ever watched EastEnders.

This next story starts with a man getting a bill from a utility company he doesn’t have an account with, Scottish Power. He figures it’s a scam and ignores it.

He gets calls from the same company. He complains to them about it. He gets referred to the complaints line.

The complaints line tells him they can’t help because he doesn’t have an account with the company.

He writes the chief exec and gets a letter back assuring him they’ll restore his account to a dual-fuel tariff and thanking him for accepting a phone call he’d never gotten.

He continues to get calls from the company.

He makes a complaint to the Energy Ombudsman, who (or maybe that’s which) tells him they (or possibly he or she) can’t help because he hasn’t exhausted Scottish Power’s complaints process.

He gets a newspaper’s consumer column involved, but they can’t manage to get through to the company’s press office. The phone numbers they call aren’t answered, the email addresses are dead ends, and the contact people aren’t contacts. Or, quite possibly, people. In the past, when the paper’s gotten other complaints about the company, the best it’s been able to do is roll the stories together and make them public, hoping to embarrass the company.

The man blocks the company’s number while he’s at work so at least he can get some work done.

Last I heard, nothing’s been resolved.

Meanwhile, a driver paid an Irish toll electronically. Then she or he–let’s call him or her them for the sake of my sanity–got a letter from Euro Parking Collection saying the payment was overdue.

The driver sent a screenshot of their bank statement to prove it was paid.

They got a letter asking for more details and sent them.

They looked at the website to make sure it had been resolved and ended up resubmitting everything they’d already sent and got a letter back saying the payment couldn’t be traced.

They called and got an automated message that convinced them the company doesn’t respond to calls. They called some more and got someone who said the company would look into it.

They called again. It would be looked into.

They contacted the company that administers the toll system and got an email asking for the information they’d already sent twice. When they sent a reply, they were told the sender’s mailbox was full.

When the same newspaper column got in touch, the information still couldn’t be located but the company did at least cancel the payment.

The columnist had almost as hard a time getting through as the civilian.

While we’re on the subject of driving, new British cars are cranking out 7% more carbon dioxide than older ones, even though they meet the new emissions standards and have all the cleaner-air bells and whistles.

And yes, that includes hybrids.

Excuse me for a minute while I go slit my wrists.

Judith Niemi, from Minnesota, sent me this: The Sibley Guide to Bird Life and Behavior reports that “house sparrows [still generally by non-birders called ‘English sparrows’] have even learned to open automatic doors to grocery stores, cafes, and other sources of food by hovering in front of the electric eye sensors.”

Judith adds, “The book does not explicitly say that none of the new world sparrows have caught on to this trick; I’m pretty sure it’s just those scrappy, street-smart birds whose lineage has been perfecting various dodges in London streets for centuries. Distracting people with their lechery, perhaps, while their chums picked pockets? Incidentally, since being imported to these shores the species has evolved to be more variable, and often bigger. Just as aggressive. There’s a metaphor in there.”

Somehow or other, this story follows from that, although I can’t explain why: In Yorkshire, a pig set fire to its pen. How? Well, first it swallowed a pedometer that another pig was wearing. Then it digested it and–with apologies to those of tender sensibilities–it shit it out, as both humans and pigs will do with the things they swallow. Copper from the battery “reacted with” dry hay and started a blaze.

Why was the other pig wearing a pedometer? To prove that it was–or presumably they were–free range.

How did the battery start a fire? It was a lithium-ion battery–the same kind that’s been known to spontaneously combust in cell phones and such.

Was anyone hurt? No. Four pig pens burned but the pigs were fine and headline writers had a wonderful time, writing about pigs pooping pedometer, firefighters saving the bacon, and calories being burned.

The fashion house Hugo Boss has a history of taking smaller businesses and charities to court for using the name Boss, so a comedian formerly known as Joe Lycett went to court to change his name to Hugo Boss. In a tweet, he explained the background and wrote, “All future statements from me are not from Joe Lycett but Hugo Boss. Enjoy.”

A newly published British Medical Journal survey from 2016 reports the MPs–that’s Members of Parliament–are more likely to binge drink than the general public is. Binge drinking is defined at six or more units of alcohol at a session.

MP Dan Poulter commented, “It is extraordinary that there are so many bars in parliament where alcohol is available at almost every hour of the day.

To illustrate the impact, the Guardian told a tale from 1983, when a junior employment minister, Alan Clark, gave a speech while drunk enough to throw entire pages without reading them. Why not? As far as he could figure out, they made no sense anyway. An opposition MP “asked me what the last paragraph meant,” he wrote. “How the hell did I know?”

And bringing together the tales of the pig and the MP, a plane headed for Iceland made an emergency landing in Edinburgh when a man got drunk enough that he tried to eat his phone. Or at least, he chewed on it hard enough to damage the battery, which fell out and started smouldering on the seat. A flight attendant threw water on it and put it out.

The passenger was also abusive to other passengers, flight attendants, and the police who came to arrest him when they landed.

He may be free-ranging again by now. He may even have an ankle bracelet to prove it. But that’s speculation.

In the late Victorian era, before mass car ownership, London traffic moved at about 12 miles an hour. In 2018, in Westminster and the City (two parts of London), it moved at 8 miles an hour.

I call that progress.

75 thoughts on “Birds, bills, booze, and the virus: It’s the (old) news from Britain”