Back in the bad old days, when the U.S. was unashamedly racist (gee, just think of the changes time has wrought), when the southern states weren’t just segregated but vibrating with the possibility of lynching, Britain had a reputation for being free of the color bar.

I don’t think it was just me who believed that. I’m pretty sure I had both company and a push or two in that direction, and I’m going to go out on a limb and say that the belief came at least in part out of the experience of black American soldiers during World War II, when the U.S. Army was still segregated and Britain felt like a place you could take a deep breath.

That should teach me not to judge a country on the basis of one or two stories, although it probably won’t. In postwar Britain, it wasn’t unusual to see signs saying, “No blacks, no Irish, no dogs,” when a place was for rent.

In the interest of getting to the point, we’ll let that example stand in for a range of racist practices and talk about the bus boycott. 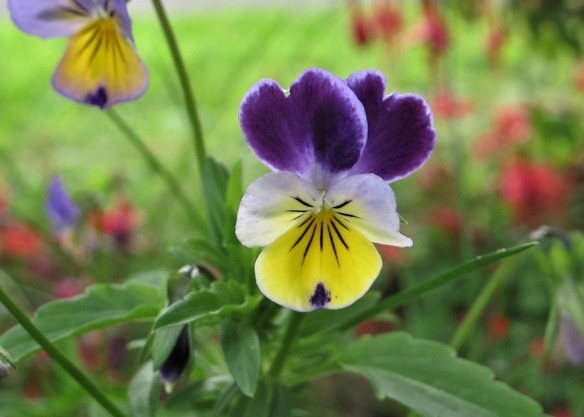 Irrelevant photo: I wouldn’t swear to it, but I think this is a viola. At any rate, it’s a volunteer.

But before we do that, I need to stop and warn you that I haven’t managed to be funny about any of this. Sorry. It happens. Ask me to write about the black death and yes, I could probably be funny. The Bristol bus boycott, though? I haven’t managed it, but it’s an interesting piece of history. For whatever good my opinion does, I think it’s worth your time.

The story starts in 1963. In the U.S., the Civil Rights Movement was still fighting to integrate the most basic elements of public life, in South Africa the anti-apartheid movement was becoming more and more visible, and in Bristol the bus company had a whites-only policy for its higher paying jobs. That was as legal in Britain as it was in the US or South Africa. The difference was that in Britain no law enforced segregation, it just didn’t ban it.

The union local at the bus company and the management were in agreement on keeping blacks out of the better jobs. For the union, it was about the garden-variety racism of some members, but it was also protecting overtime. Before the war, basic wages had matched what skilled workers at the city’s aerospace plant earned, but since then they’d fallen behind. That left drivers and conductors dependent on overtime to make up the difference.

But overtime depended on the company being short of workers, so tapping into a new source of drivers and conductors was the last thing the union wanted, and back in the fifties the local had passed a resolution against hiring anyone black as a driver or conductor.

What management got out of the whites-only policy is anyone’s guess. Maybe just a chance to sit comfortably in their existing prejudices. It’s a surprisingly powerful motivator. You can judge their thinking by a quote from a manager:

“The advent of coloured crews would mean a gradual falling off of white staff. It is true that London Transport employ a large coloured staff. They even have recruiting offices in Jamaica and they subsidise the fares to Britain of their new coloured employees. As a result of this, the amount of white labour dwindles steadily on the London Underground. You won’t get a white man in London to admit it, but which of them will join a service where they may find themselves working under a coloured foreman? . . . I understand that in London, coloured men have become arrogant and rude, after they have been employed for some months.”

A group of four men formed the West Indian Development Council (West Indians made up the majority of the black community) and set out to demonstrate that the bus company really was refusing to hire black drivers and conductors. An eighteen-year-old, Guy Bailey, applied for a job and showed up at the receptionist’s desk, explaining that he had an interview.

You have to give a kind of back-handed credit to the bus company, because if they’d wanted to prove the association’s point they couldn’t have been more helpful.

“I don’t think so,” the receptionist said.

He gave her his name. Yup, he had an appointment.

She went to the manager’s office door and called,  “Your two o’clock appointment is here, and he’s black.”

The manager called back, “Tell him the vacancies are full.”

The company had been advertising for applicants, and an hour before someone from the association had called to ask about a job and been told they were hiring. He had an Essex accent, so they’d assumed he was white.

“There’s no point having an interview,” the manager said, still calling from his office. “We don’t employ black people.”

The next day, the association called a boycott of Bristol’s buses.

At this point, I’d expected to read about the boycott itself, but the boycott isn’t the focus of anybody’s article about, um, the boycott. Bristol’s black community wasn’t large, so it didn’t have the economic impact of the Montgomery, Alabama, bus boycott. Instead, the West Indian Development Council picketed bus depots, organized blockades and sit-ins, and generally brought the issue in front of  the public. Britain was the scene of an active movement against apartheid in South Africa, and the two causes became linked.

The strategy had an impact. The local became isolated within the union movement and was accused of bringing shame on it. And the drivers began getting grief from passengers.

Bristol’s Council of Churches decided to help out by issuing one of history’s more useless public statements: “We seriously regret that what may prove an extended racial conflict arising from this issue has apparently been deliberately created by a small group of West Indians professing to be representative. We also deplore the apparent fact that social and economic fears on the part of some white people should have placed the Bristol Bus Company in a position where it is most difficult to fulfil the Christian ideal of race relations.”

If you figure out what they’re calling for there, do let me know. Possibly a return to the time when they could snoozily ignore the problem.

Negotiations went on for months with the bus company, the union, the Bishop of Bristol, and the city government doing their best to sideline the West Indian Development Council, but Learie Constantine–remember him? the cricket player?–met with everyone he could and convinced the Transport Holding Company , the parent company of the Bristol Omnibus Company, to talk with the union, which they did for several months before the union voted, at a meeting of 500 members, to end the color bar.

The first non-white conductor wasn’t Guy Bailey but a Sikh, Raghbir Singh. Bailey–remember, he was only eighteen–had found it hard being at the center of the storm and decided he didn’t want to work on the buses.

“I felt unwanted, I felt helpless, I felt the whole world had caved in around me. I didn’t think I would live through it,” he said. “But it was worth it.”

A few days after that first hire, four other non-whites joined him.

In 1965 and 1968, Britain passed two Race Relations acts banning discrimination in housing, employment, and public places. Harold Wilson’s government had decided it had to keep a situation like Bristol’s from happening again.

Three of the central people, Bailey, Roy Hackett, and Paul Stephenson, were awarded OBEs for the roles they played.

An OBE? Well, irony’s alive and well, thanks. That stands for Order of the British Empire, which (you may remember) wasn’t what you’d call free of racism. Still, recognition is recognition, however deeply tinged with irony.

70 thoughts on “The Bristol bus boycott”