The history of British democracy (or semi-democracy, as you’ll see) is long and convoluted, so let’s hack off a small piece to talk about here: the rotten borough. This was an electoral district that had lost most of its population but still sent an MP–that’s a Member of Parliament–to the House of Commons. Or sometimes more than one MP.

Just before the picture changed with the Reform Act of 1832, 140 MPs represented (if that’s the right word) rotten boroughs. That’s 140 out of 658 Members of Parliament. Fifty of those boroughs had fewer than fifty voters.

Meanwhile, major industrial cities like Leeds, Birmingham, and Manchester had no MPs at all.  What was a rotten borough like? Gatton, in Surry, had twenty voters when the monarchy was restored (that was in 1660, and yes, I had to look it up) and a hundred years later it was down to two. Old Sarum had one farm house, some fields, and a lot of sheep. Both sent MPs to parliament. The former port of Dunwich had crumbled into the sea and only 32 people were left above the water line. It didn’t just send one MP to parliament but two. 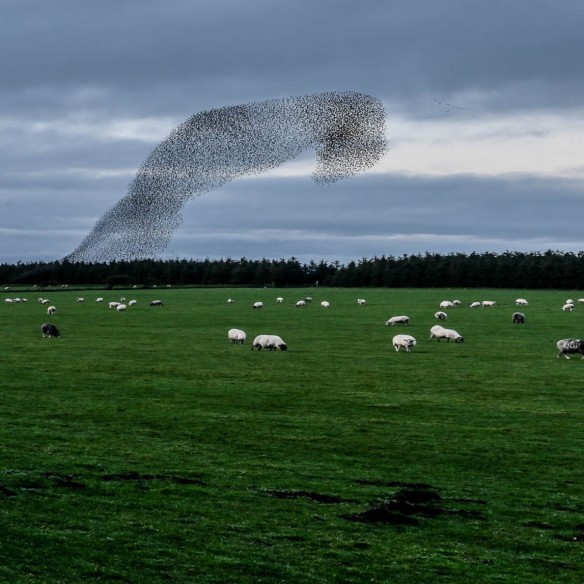 Irrelevant photo: A murmuration of starlings (along with some sheep) on Bodmin Moor. Photo by Ida Swearingen.

So who got to vote?

But to hell with it, it gives you enough to work with–as much (if your mind’s at all like mine) as you’ll remember anyway.

The shifting categories point to a central issue, though: Not many people could vote, so residents form a very different category from voters. Women? Don’t be silly. Who’d trust ‘em with anything as serious as the vote. Men? Well, only the ones who mattered, which is another of saying men of property. How much property varied from place to place, but the requirements everywhere involved (a) being male and (b) owning property.

During the Civil War (that’s from 1642 to 1651), when the Levellers, serving as soldiers in the Parliamentary Army, argued for (nearly) universal male suffrage, their officers defended limiting the vote on the grounds that only people who had a stake in society could be trusted to take part in politics. And by having a stake, they meant owning some part of it.

The Levellers were naive enough to think that risking their lives for a new form of government might prove they had a stake in their country’s political future. They were wrong, and it was centuries before their demands were met. The conviction that owning property qualified a man to vote dominated political thought until the next paragraph, where suddenly it’s 1780.

Look! It’s 1780. What a surprise. In England and Wales, about 214,000 people have the right to vote. That’s less than 3% of the total population. In Scotland the electorate’s even smaller.

Now that we’ve pegged those numbers into the ground we can leave 1780 and toss a second element into the discussion of voting: It’s not done by secret ballot. That makes it easy for an ambitious politician–or a would-be politician–to buy votes. Because the electorate’s small, he doesn’t have to buy that many and because voting is public he can see whether the people whose votes he bought are honest enough to stay bought.

In some constituencies, however, this won’t work. Not because the electorate’s above that sort of thing but because whoever holds the power locally controls the process, selecting the MP and tells his people to vote for him. Get his approval and you’re as good as elected. Don’t get it and your chances are thin.

Did you notice how gracefully we slid into the present tense there? It’s going to get in the way eventually, though, so we’ll slip back into the past tense, where we belong.

I know. When I write anything sane, I comb through and straighten out that sort of thing. Blogs make no commitment to sanity, however, and I enjoy the freedom to screw up so openly.

Buying off the electorate was done as openly as I just shifted tenses. You can even find a few statistics on who spent how much in what year buying which constituency. Approaching a powerful lord if you wanted a seat in parliament was done just as openly. That was democracy in action.

Pressure to change the system was growing, though. The middle class was getting larger and richer.

And here I have to interrupt myself: I just hate it when I have to talk about the middle class. It means I have to define it, and it’s a baggy old piece of clothing. It’s easy enough to say that the middle class was made up of people who weren’t poor but weren’t aristocrats, but that’s a hell of a range and tells you less than it seems to. It includes everyone from the most marginal professional or shopkeeper to the richest industrialist. Not only did their incomes range all over the place, so did their interests.

We could probably pick that definition to pieces but I’m going to move on before we get a chance.

A middle class person who was rich enough could vote, but because of the way constituencies were drawn that didn’t mean they’d be in a position to influence an MP. The richest members of the middle class wanted political power that would match their economic power.

At this point, a couple of little things happened, like the French and American revolutions, and they spoke to people lower down on the economic food chain. Things that had once looked unchangeable had been shaken to pieces. By the end of the eighteenth century, corresponding societies that pushed for universal manhood suffrage had come into existence.

In 1819, a public meeting calling for universal manhood suffrage was attacked and eleven people were killed. It’s known as the Peterloo Massacre. I keep promising to write about it and eventually I will. For the moment, take it as a visible sign that the demand for change was flowing outside the established political channels.

People in power gradually began to acknowledge the need for reform, and the rotten boroughs were high on the list of changes that needed to be made. But that was some people in power, not all of them.

By way of an example, take Arthur Wellesley, the Duke of Wellington and in 1830 the Tory prime minister. In an 1831 letter, he defended the rotten borough system, writing, “I confess that I see in thirty members for rotten boroughs, thirty men, I don’t care of what party, who would preserve the state of property as it is; who would maintain by their votes the Church of England, its possessions, its churches and universities. I don’t think that we could spare thirty or forty of these representatives, or with advantage exchange them for thirty or forty members elected for the great towns by any new system.”

That does have the virtue of honesty.

But in 1830 the Tories lost power and a Whig government, headed by Earl Grey, supported reform, which it counted on “to prevent the necessity of revolution.” Toward that end, the House of Commons passed a reform bill in 1831 but it was defeated in Tory-dominated Hour of Lords.