The English language plays tricks when it travels from one country to another, so if you asked me to define a city I’d have to ask you where the city is. Or where you are.

Some days, I’d have to ask you where I am.

In the US, it’s fairly simple: A city’s a place where a lot of people live. How many? Um, yeah, no one’s drawn a clear line to separate it from a town.

In Britain, though, a town has to do more than get big to become a city. And in some cases, it doesn’t even have to get big.

Most people in Britain will tell you that a city has to have a cathedral, although one article I read claims a university will do just as well, and a few people think the town has to gather up a lot of people and convince them to live there.

But in Britain there’s a difference between people thinking of a place as a city and the place formally being one. To really be a city, the place needs the queen or king to wave a magic city-making feather over it. 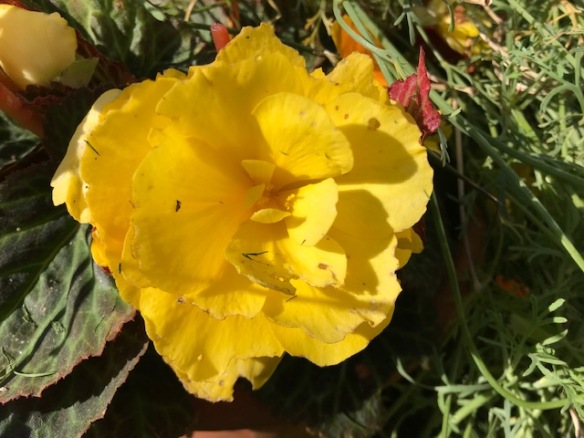 Yes, really–except for that business with the magic feather. Because of course the queen or king has the final say over how many cities the country has. If they didn’t, for all we know every cluster of houses would dance around singing, “We’re a city. Look! We’re a city.” Order would break down. Trains would stop running. Long-established recipes would cease to work.

Imagine Britain without its bakewell tarts and victoria sponges.*

So yes, of course officialdom wants to put some limits on the number of cities.

Mind you, the king or queen doesn’t actually make the decisions about which town to citify. Officials do the choosing, but it’s the monarch who waves that feather, presumably while looking entirely serious about it.

Just to confuse the issue, though, any number of towns are governed by bodies that call themselves city councils.

Why do they do that? Possibly because someone has delusions of grandeur and possibly because the language is at war with the country’s endless formalities.

Britain’s home to 66 officially recognized cities–50 in England, 6 in Scotland, 5 in Wales, and 5 in Northern Ireland. Not all of them have cathedrals. The belief that they had to comes from a time when building a cathedral really did make you a city. This led to small places like Truro being cities while much bigger industrial centers like Birmingham and Belfast weren’t.

In 1889, Birmingham became the first cathedral-less place to be recognized as a city, and these days you can leave all that stone in the ground and bid for city status through the Ministry of Housing and a Few Other Things. It’s less romantic than building a cathedral, but it’s cheaper and it’s easier on the fingernails.

There’s a catch, though: You can only apply on special occasions, when the Ministry opens up bidding to mark some occasion: the millennium, the golden jubilee, the silver jubilee, the arrival of a new kitten. Outside of those special times, towns have to shut up and wait.

What’s a jubilee? In dictionary terms, a celebration of anything from emancipation to becoming a king or queen, but in this context it has to do with Liz having become a queen some number of decades before. Or more accurately, the queen—something Britain as a whole takes seriously, even if not every single individual who lives here does.

How big does a city have to be?

Not always very. The U.K.’s smallest city is St David’s, which has a whopping 1,600  residents–not all that many more than the village I live in. It earned its status in 1995 to mark the queen’s 40th anniversary, and it was chosen because of its role in Christian heritage.

Yeah, the monarchy takes that Christian heritage flap seriously. It has to. If it didn’t, what’s to justify someone being the monarch instead of just one more citizen?

Part of the argument in its favor, though, was that it had a cathedral, so people already thought of it as a city.

In practice, being big doesn’t guarantee official status as a city, and neither does being thought of as a city. London contains two cities–the City of London (called the City, as if the planet didn’t have any others) and the City of Westminster. But London itself itself isn’t, officially speaking, a city.

If you get dizzy, just sit down and rest a while. We’ll be here when you come back.

Most city councils (whether they govern cities or towns) will appoint a mayor, who does ceremonial stuff and shows up at special occasions in eye-catching and wildly outdated clothes, including gold chains that outdo anything a celebrity ever turned up in. If the queen (or king, as the case may be) has waved a different magic feather over the locality, the mayor may turn into a lord mayor. This will make no practical difference in his or her ability to climb stairs, lose weight, or push a car out of a snowbank.

But having a lord mayor doesn’t make a place a city.

You do not laugh while you’re doing any of that upon pain of being banished from the event and left giggling hysterically on the sidewalk.

In a different category of officialdom, many towns and cities have an elected executive mayor, a title that sounds less impressive but comes with political powers, which ceremonial mayors lack.

Having an executive mayor also doesn’t make a place into a city.

Can a place stop being a city?

Yup. Rochester accidentally lost its status in 1988, when it reorganized its government structure and–well, you know how sometimes the cat jumps on the keyboard and your entire life disappears and next thing you know you no longer exist? It was like that.

By way of demonstrating how important it is to have city status, four years rolled past before anyone noticed the city was no longer a city.

It still hasn’t gotten its status back.

What are the benefits of being a city?

None, at least according to Professor John Beckett. “There never have been any privileges. It’s always been a status thing, nothing more. There’s nothing to stop places declaring themselves a city–Dunfermline did it.”

The whole system, he says, “makes no sense” and just “gives a bit of patronage to government”.

Dunfermline declared itself a city in 1856. It figured that since it had been Scotland’s capital for 400 years, it had the right. The idea of it as a city never caught on, though, and it’s planning to bid for genuine city status when the queen’s platinum jubilee rolls around, in 2022.

* A victoria sponge isn’t something you wipe the kitchen counter with. It’s a cake-ish thing, as is a bakewell tart, although I’m stretching the definition of cake pretty thin in saying that.

52 thoughts on “How a British town becomes a city”