I’ve been browsing through too many blogs lately, so I don’t remember where I found the question “what do Americans mean when they say ‘biscuit’?” (I’m paraphrasing. If I didn’t remember to make a note of where I was, raise your hand, please, if you think I had the foresight to copy the actual words. No hands? I didn’t think so.) I left an answer, then thought that in the interest of intercultural mayhem, which I do so much want to promote, I should answer it here as well. So for anyone who (a) isn’t American or (b) is American but is somehow unaware that biscuits are bliss, I’m going to print a recipe. Just as soon as I manage to shut up.

Which may not before a while. Feel free to scroll down if you’re bored. I’ll never know. 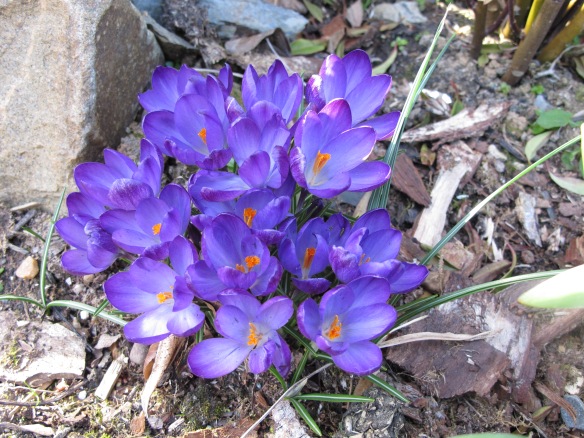 Irrelevant photo: It’s spring! Crocuses by our back door.

Since I moved to Cornwall and began my campaign to mess with the purity of English cooking, I’ve learned to call biscuits baking powder biscuits to distinguish them from cookies, because that’s what anyone British would think I meant otherwise. Although they also say “biscuits” to mean crackers. While we’re at it, crackers are also something non-edible that show up on the table at Christmas. Are you confused yet? That tells you you’re not British. In case you weren’t sure.

In the U.S., I was more likely to call baking powder biscuits either just plain biscuits or buttermilk biscuits. But let’s stick to the phrase I’m currently using: Baking powder biscuits are a cousin of the scone, but they’re not as sweet. Or if you’re comparing them to savory scones they’re not as—oh, you know, scone-y. Sadly, they’re also not as good cold. The leftovers tend to taste kind of salty. But that only means you have to eat more while they’re warm, because they’re light and glorious then.

I didn’t grow up in the American biscuit zone, which is made up of (a) the South and (b) the African-American community in any part of the country. Those are generalizations, I know, but they’re accurate for the present purpose, which is to say that in spite of my geographical and ethnic limitations, I’ve been around both parts of the zone enough to know good food when I see it, and since Wild Thing’s originally from Texas, learning to make biscuits seemed like a good idea. I mean, if she can not only eat but pronounce both challah and knishes, I can surely make biscuits. She swears mine are better than her mother’s, but I only dare say that in public because her mother’s dead. The difference, I suspect, is that I use butter. You can use margarine if you like, or (probably, but what do I know? I’m a Jewish atheist New Yorker and a distinctly amateur cook, which makes me no expert on the subject) lard or pretty much any other hard fat.

The trick is to use as little liquid as possible—just enough to get the dough to form a ball. Too much liquid and the biscuits will be tough. That much I do know.

¾ cups (approximately) buttermilk or milk with vinegar * (see note below)

Sift the dry ingredients together—or if you’re as lazy as I am, dump them all in a bowl and take a whisk to them. I swear it works just as well. Cut in the butter  or crumble it in with your fingers. Your fingers will warm the butter, so cutting it is better. If you can find a pastry blender, that’s ideal. Don’t lose sleep over how small the bits of butter are; as long as you don’t leave it looking like gravel, it’ll be fine. Stir in just enough buttermilk to form the dough into a ball. Knead if very briefly—no more than 30 seconds—just to bring the dough together fully .

Dust your counter with flour and roll the dough out so it’s about ¾ inch thick. Understand that I’m making up the thickness. Mine vary all over the lot. Cut into rounds with a biscuit cutter or a glass. (My biscuit cutter had a diameter of 2 ¾ inches. Just so’s you know.) Set them on a greased baking sheet, which in the U.S. I called a cookie sheet. It doesn’t matter if they touch.

Since the thickness of my biscuits varies from batch to batch, I pry one open to make sure they’re done in the center. You’ll want to split them when you eat them anyway, so it doesn’t show.

Eat warm with any combination butter and/or honey, jam, or gravy.

* If you don’t have buttermilk (and it’s not as widely available in the U.K. as it is in the U.S.), you can add some vinegar to the milk—roughly one teaspoon to a cup seems to do it. I sometimes add more. It doesn’t seem to be finicky. Just don’t use a flavored vinegar, or a red one unless you want pink biscuits. White or cider work well.