The web site for the Ottery St. Mary Tar Barrels Festival says (or said when I last checked it), “Each year it becomes more difficult to find money to cover the costs of running this event.” Well, yes. Given that it involves a bunch of people running around with flaming tar barrels on their shoulders, I can see why insurance might be an issue.

The event is hundreds of years old, although the web site doesn’t say how many hundreds. Or how many people over the centuries have set themselves or their neighbors alight. It doesn’t matter: It predates insurance, that’s what we need to know. 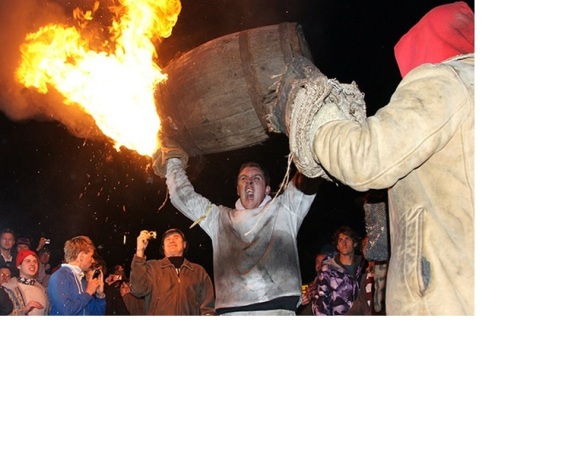 Holy flaming tar barrels, they really do this. Sorry about all the white space. The photo’s from the official web site and I can’t seem to crop the damned thing.

The web site asks visitors, for the sake of safety, not to pound on the barrels. A few years ago, someone threw a spray can into one of the barrels instead, causing an explosion. I couldn’t find any reference to it on the web site, but maybe they don’t want to plant ideas in anyone’s head. Wise. I should probably follow their lead but–oops, too late. If you feel impelled to show up and throw a spray can into a burning barrel of tar, you didn’t get the idea here, okay?

People in Britain make a big deal out of health and safety concerns being overdone. That’s partly, I think, because complaining about something in ways that won’t change them runs deep in Britain’s cultural DNA and partly because we humans do have a gift for taking a good thing (most of us would agree, for example, that keeping people from being killed and maimed at work is a good thing) and take it to absurd lengths. I was once told, in a second-hand shop (sorry: charity shop), that they couldn’t sell crochet hooks or knitting needles because of health and safety. At the yarn store, where I eventually bought one, they must keep them locked up. Can’t be too careful, you know.

A friend teaches health and safety workshops, and she swears that crochet hooks aren’t one of the things that keep her up at night. So yes, there is some absurdity going on, but it’s not the fault of the people whose job it is to promote health and safety, it’s the fault of overenthusiastic twits who use the phrase to defend whatever crazy decisions they’ve made.

So anyway, you’ll find people who talk about health and safety, as a single phrase, the way a certain kind of person—and you know who they are—complain about political correctness gone mad. (How upsetting that they can’t call entire groups of people names anymore without being told off. Or kick them out of their seats on the bus. Or, you know, lynch them, the way they could in the good old days.) If you listen for a while—especially after you’ve been told you can’t buy a crochet hook—you start to think modern life is being forced into such a narrow mold that humans will never again get to test themselves against any real challenge, and then you open the Ottery St. Mary Tar Barrel web site and think, Wait a flamin’ minute. What about health and safety?

Anyway, Wild Thing and I meant to go this year and bring you a first-hand report, but life got away from us and it’s not going to happen. In fact, we meant to get to every strange traditional festival we heard of but only managed one, the Gloucester Cheese Rolling. Maybe next year we’ll do better.

If you go to the Tar Barrels Festival (hurry; it’s on Nov. 5), leave your spray cans behind and don’t pound on the barrels. If you’d like to bring a small personal fire extinguisher, however, there’s no rule against it. And let me know. I’d love to have a first-hand report.