A U.K. company has just trademarked the word should’ve. And just for safety, in case its competitors can’t spell, it threw in shouldve, without the apostrophe.

It’s ridiculous, but lots of odd stuff gets trademarked. A while ago, Val at Quiet Season  mentioned that the Royal Mail has trademarked the shade of red it uses on its trucks and on mailboxes. Okay, it calls them post boxes, and since it owns them I suppose it gets to decide what they’re called. Maybe it should trademark post box and see if that doesn’t catch the attention of stubborn Americans who continue to mail their letters instead of posting them. 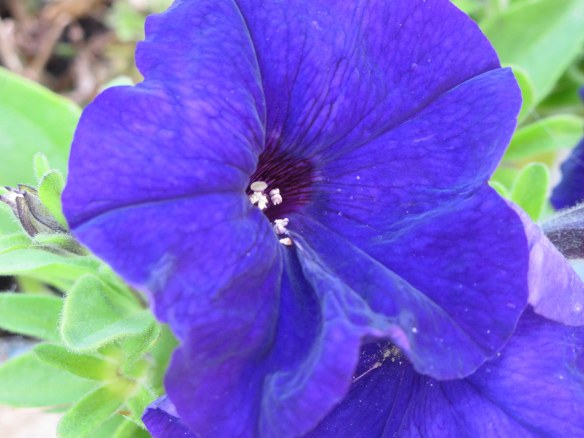 Irrelevant photo: Last sighting of my petunias before the slugs destroyed ’em.

Sadly, trademarking the color doesn’t mean it can then sue anyone who uses that shade of red to knit a hat or a pair of socks. Ditto with a word. The Should’ve Corporation can’t sue us for saying “should’ve.” (No, Should’ve Corporation isn’t its name but I’m not in the mood to give it the tiny bit of extra publicity I have at my disposal.)

Why do I say “sadly” when I’m talking about them not being able to sue people? Because I do so love it when businesses and governments and all those other fine folks with power at their disposal overreach. Britain’s courts are already in a quiet and unpublicized meltdown because the government slashed access to legal aid. That’s meant that people who can’t afford lawyers but who are now ineligible for legal aid are having to represent themselves, and predictably enough a lot of them are making a time-wasting mess of it, and cases are backing up. I know that’s not funny, it’s tragic, but it also is bitterly funny. All we need to do is pour everyone saying “should’ve” or wearing the wrong shade of red into the courts on top of that to make a real mess.

But no, that’s not what trademarking is about. It means that if you go into competition with the trademark owner, you can’t use the trademarked whatever. If you compete with the Royal Mail, you can’t use their color. If you’re in the apple pie business, though, you can use any color you like, although you might want to be careful of the word apple because some corporation or other (its name has slipped my mind) owns that and may give you grief about it. Because even if you’re not really in competition, you won’t find clear lines here and it all gets silly very quickly. Sky TV trademarked the word sky and then sued Skype—even though they’re not in the same business—because it’s logo looks like a cloud. Or so the article I linked to above says. To me, it looks like a blue blob. But as a court explained, “clouds are to be found ‘in the sky.’ “

I can’t argue with that. I can’t understand its relevance, but it’s true beyond the reach of logic, and maybe what I just looked at is the new sky-free logo.

Sky also sued the makers of the video game No Man’s Sky, although they too seem to be in another kind of business. Even as I type, some court may be weighing the question of whether the sky is to be found in the sky.

To date, the entire language is still available for noncommercial use, but keep your eye on this space. I’ll let you know if that changes.

63 thoughts on “Trademarking the English language”