Forget the real news. It’s too depressing. Here’s everything you need to know about what’s happening in Britain and, briefly, in the U.S.

Petitions: Britain introduced its first plastic banknote recently, and it’s worth £5. For a while there, you couldn’t get or give one without being warned not to put it in the tumble dryer. Apparently they shrink. Cue a range of jokes about money laundering, although it is, apparently, safe to put it in the washing machine. The police will, I’m sure, be watching for clotheslines with £5 bills neatly clipped in a line and drying in the sun.

We don’t have a dryer, so we won’t be shrinking any. And I think they’re called notes in British, not bills. But don’t trust me on that. The other night, I sent a group of friends into a meltdown when I asked if someone trying to light her cigarette had found a match. Turns she was looking for a light, not a match, although she swore she’d have understood me if I’d asked about a matchstick.

The things we use to light our woodburner (which is called a stove, unlike the stove, which is called a hob) are sold as matches, so I’m baffled by the problem. She tried to explain it but it all got even more complicated and we gave up. 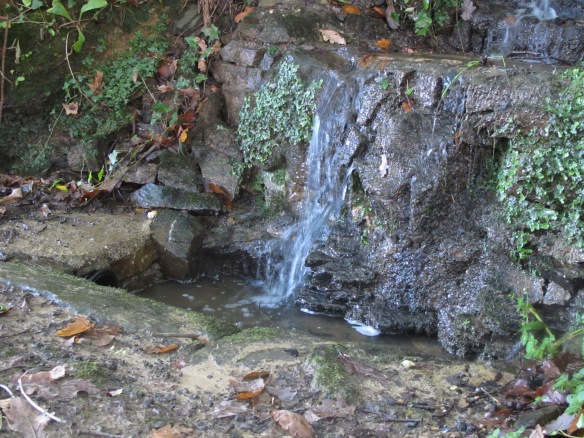 Irrelevant photo: This is just runoff from a field, but it makes me understand how this landscape gave rise to tales of fairies and such.

But back to £5 bills or notes. Just this week, the nation learned that the new bill contains tallow—in other words, animal fats derived from beef or mutton, and someone’s started a petition on Change.org to remove the tallow. The headlines focus on vegans and vegetarians being upset about this, but Hindus are considering banning the bills from their temples.

Some of the articles claim the petition’s calling for fat-free bills. It’s not, but it might be a clever move, creating an alliance of vegans, vegetarians, Hindus, and dieters.

Searching for the fat-free petition brought my attention to a variety of other petitions about banknotes. One wants to ban all politicians from them.

Government secrets: A parliamentary aide was photographed walking out of a meeting with a set of notes that may detail the government’s Brexit strategy. Or may not. Maybe they’re the aide’s opinions on the strategy. No one’s saying. What is known is that she walked out a door that carries large-scale warnings about covering any notes you’re carrying and she ignored them. A press photograph first called out, “I can read the document,” and when she and the people she was with didn’t pay any attention he took his shot and suddenly the top page of her notepad was appearing everywhere. Among other things, the notes said, “What’s the model? Have cake and eat it.”

I’ve sat through meetings that drove me to write things like that. Mercifully, no one much cared. The aide, though? I doubt this is going to help her career.

What does it tell us about Brexit? Not much, but the government’s keeping its strategy so deeply hidden that some folks wonder if it has one. That makes anything coming out of a Brexit meeting hot gossip.

The photographer who took the shot is a regular outside the Downing Street offices and he sent it out on Twitter because, he said, “picture desks don’t always take much notice, but most political journalists follow me on Twitter so it gets picked up that way.” But most of his Twitter followers are more interested in pictures of 10 Downing Street’s cat and the chancellor’s dog.

The cat was brought in when Cameron was prime minister, and he didn’t take the cat with him, which is just one more thing I can hold against the man. What kind of prime minister brings a cat into his residence and then leaves it for the government to take care of?

Jobs and employment: Okay, this is about me rather than government policy, but since every government ever elected anywhere claims to be creating jobs, that should be a tight enough connection to let me to get away with this.

LinkedIn sent me an email saying it knew of over a thousand jobs in Exeter that would be a perfect match for me. Never mind that Exeter’s just over than an hour from where I live. I’ve known people who commute that far for work. It half kills them, but they do it. And never mind that I’m retired. I doubt I mentioned that to LinkedIn.

Why am I on LinkedIn if I’m retired? Someone invited me to join her network years ago and it seemed rude not to. Besides, I was working then. I’ve stayed on because anything that passes itself off as a network looks like a useful way to promote a book. Or a blog. Or—oh, hell, someone remind me what I’m supposed to be promoting this week, would you?

I’m not sure how useful it actually is, or even how useful it could be. I haven’t figured out how what to do with it, or why. I’ve never fit neatly into the established categories, so—well, yeah. I’m on LinkedIn for reasons I don’t entirely understand.

But I stay for the entertainment.

The jobs the email listed are for a novelist, an author, a writer, a freelance writer, and a chief executive officer. If you notice anything odd in that list, it’s okay, you’re not—as far as I can tell from here—on drugs.

I itch to simplify that list. Because in addition to being a novelist, an author, a writer, and a freelance writer, I was also a copy editor, and that’s what copy editors do. How much overlap is there, guys, between an author, a writer, and a freelance writer? Why are we mentioning all three? I’ll give them novelist: That’s specific enough to justify its own mention, although I want to tell you, it’s damn rare that anyone wants to hire one. When did you last hear someone yell, “Quick, we need a novelist to sort out this mess”?

We’ll get to the next problem with the list in an inch or two.

I clicked on novelist to see what jobs LinkedIn had found in Exeter.

None. But it did want to know what I thought of its new job search experience.

Oh, hell, I loved it so much that I went back and clicked on author, writer, and freelance writer.

No matches. So I clicked on chief executive officer—a job I’m stunningly unqualified for and the true oddity of the list.

No matches. No one in Exeter is hiring CEOs. Or maybe, wisely, no one’s hiring CEOs with my qualifications.

It all reminds me of the time I ran into an acquaintance and asked how she was.

In a similar vein, I wasn’t the one who asked about jobs for novelists. Are they going to notify me every time one doesn’t come up? I’m going to have a lot of emails.

Technology: This isn’t about the U.K., it’s about the U.S., but I do want to be even handed.

The USS Zumwalt, the U.S. navy’s super high-tech destroyer and its most expensive ever, broke down in the Panama Canal. It’s worth $4.4 billion, can fire rocket-powered shells up to 63 miles—those are nautical miles, and let’s not get into how they’re different from other miles because it’ll be such a snarl we’ll never get loose—and it had to be towed to the nearest garage, where a mechanic scratched his head and said, “I don’t know, buddy. Looks expensive. We’ll have to send away for parts, so you could be here for a while.”

It had a similar problem the month before. And if that isn’t embarrassing enough, it can’t fire its guns because at $800,000 per round the ammunition’s too expensive.

56 thoughts on “The truly important news”