In a fit of jealousy that other countries get all the attention for their hurricanes, the Met has started naming lower-grade storms. That’s kind of like being jealous of your sister because she got all the attention what with that polio she had, but you know what humans are like. We’re a difficult species.

But before I go on, a note about the Met. There are two of them: One deals with weather and the other deals with London policing. How does anyone know which is which? Context. That’s the same answer you get when you ask how anyone knows if a speaker just said “there,” “they’re,” or “their.” Or “there, there, there.”

This indicates that living with the English language has made everyone so crazy that a succession of governments hasn’t seen any reason not to call two major governmental bodies by the same nickname. Every so often, someone mixes the Met up with the Met and tries to arrest a storm, but it doesn’t happen often.

I’ll be talking here about the Met that deals with weather. I haven’t been arrested in London yet, but if I am, I’ll tell you everything I learn about the other Met. 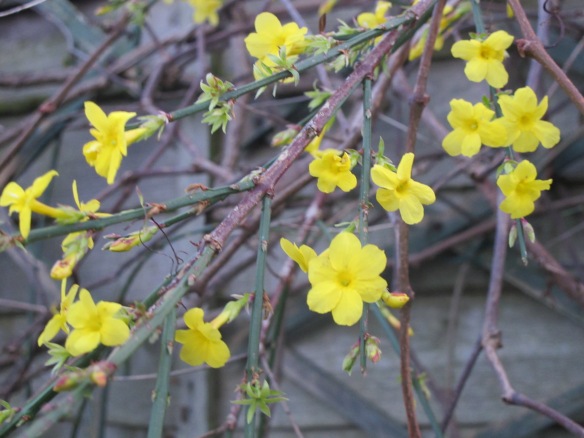 Storm Doris hit us last week, just before my last post about the weather went live. A better blogger would’ve rushed in to update the post, but me? I made a couple of mental notes, then I made apple bread. It was a good day to be indoors. I like apples.

I did walk the dogs, and the wind was high enough to make my cheeks flap like rubber. That’s not a scientific measurement, since it’ll happen at a lower and lower velocities the older I get and the rubberier my cheeks get, but it is an indication of a high wind. If you need another measurement, local blogger Bear Humphries wrote on Facebook, “High winds—well, 60-70mph ish—meant loads of pictures on Twitter showing blown over wheelie bins with the words ‘Carnage here.’”

It was carnage. Our empty compost bin blew over.

If you look at the photos the BBC posted, you’ll learn that a barely measureable snowfall slowed traffic to a crawl somewhere north of us (almost the whole country is north of us; the snow may have been heavier north of where the photo was taken, but it may not have been), that trees fell, that waves smashed against breakwaters in the most scenic possible way, and that in the City, which is London’s financial district, a man’s tie was blown to the left—which is to the right in the picture since the photographer was facing him.

It was a blue tie. That may be significant.

If you try the Guardian, you’ll find pictures of women’s hair going feral, cars flipping over, more cars pancaked under trees, trucks jackknifing, and King’s Cross train station turned into a storage area for spare humans, all of whom were stashed in an upright position.

Al Jazeera shows a gritting lorry—translation: a truck that spreads a sand and salt mixture—on its side after a skid. That was in Scotland and it must’ve been embarrassing.

on more than one of those sites, you’ll find pictures of umbrellas trying to devour humans, who are doing their best to hold them off. Why do people take umbrellas out into high winds when they must know it’ll aggravate them? Is the umbrella a fashion statement or something?

Remind me, someone: What is a fashion statement?

But we were talking about Doris: Ferries and flights were canceled. Train travel was disrupted, as train travel always is when the country experiences weather. Any sort of weather, including good. The standing joke when a train’s delayed is that there were leaves on the line, which was genuinely given as an excuse once, although whoever said it said not just that there were leaves on the line but that they were the wrong kind of leaves. Which either makes it better or worse but I don’t think anyone’s been able to figure out which.

Anyway, you can take your choice of both wind speeds and measuring systems, because it’s mix and match day here at Weather Station Hawley.

Why do some places report wind speeds in kilometers per hour and others in another in miles per hour, while a few others report them both ways? Because Britain in only intermittently metric. When it grows up it will have to commit itself to one system or the other, but for the moment, folks, give it some space to experiment. It’s just a phase. I’m hoping that if we don’t make an issue of this the country won’t either. Because we’re going to be leaving the E.U. soon, and if we don’t handle this carefully we may go back to measuring in cubits and barleycorns and firkins.