Let’s take a quick survey of the stuff people survey in Britain. It won’t tell us much about the country, but it might keep a few of you from hanging out on the street corners and getting into trouble.

Anytime stuff gets collected, someone has to come along and report on everything that shouldn’t be part of that particular collection. What this means is that, no, you’re not invisible. The entire world knows about the purple lipstick the dog chewed that you tossed in with the recycled paper because it seemed to makes sense at the time.

But other than your purple lipstick, what else do people in Britain try to recycle? 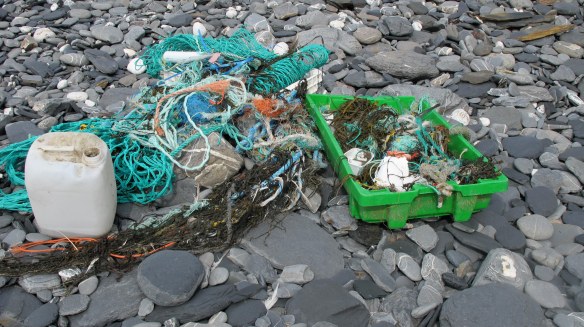 Vaguely relevant photo: A bunch of junk I collected on a local beach. We have a village beach clean every week, and once you start noticing plastic junk on the beach, you find yourself collecting it everywhere. This is from a different beach–one that’s hard to get to and rarely cleaned. Nobody tossed this stuff into the recycling bins–they just tossed it into the sea instead.

The Guardian reports that recyclers found a car door, a full Christmas dinner (plates, tablecloth, dessert, and everything else; if I’d been invited I might’ve been dumped in with it), and (yes indeed) 1,000 Greenpeace buttons, which are called badges here. Somebody sat down and counted them. Or made up the number as a poetic way to convey the idea that there were a lot of them.

Business Waste’s website (do I read the exciting parts of the web or what?) lists a human skull (the cops said it was from a play and called off the hunt); a voodoo doll covered in blood (allegedly; convince me that the people who found it really recognize a voodoo doll; or blood); money, in both large and small amounts; dead animals (pretty common, they say); a box of Free Nelson Mandela tee shirts that were thrown out long after he was not only free but dead, making the call to free him, um, problematic; a wedding dress, together with an engagement ring and a wedding cake (who says romance is dead?); a box of breast implants (unused, mercifully); a box of equally unused condoms (not, presumably, in the same place); and winning lottery tickets.

Most of us, I’m going to assert, since none of you are here to argue as I type this, would agree that recycling’s a good thing. So what this proves is that no idea is so good that someone can’t come along and screw it up.

The rule of law is also generally considered a good idea, and it’s easy to screw that one up too. Someone’s collected a bunch of obscure laws that are still on the books  in various parts of Britain. People all around the world love to do that. The ones here ban:

All beached whales and sturgeons found in Britain belong to the crown. 1322. What the queen does with them I can’t imagine, or where she keeps them, since they’ve got to be smelly by the time they reach her. Maybe someone will report on odd stuff she sneaks into that collection–all those feathered hats and busted washing machines that someone dumped on the beach.

An academic study from Swansea reports that reading a lot of parenting books correlates with depression and anxiety. It doesn’t prove that the books cause the problems, but it doesn’t prove that they don’t, either. I edited a couple of self-help books during my career, and they depressed the hell out of me. I was also part of a group of freelance editors who planned to write a self-help book for recovering self-help book addicts. We had one hysterically funny meeting about it, after which we couldn’t figure out why the joke had been funny.

No, we were sober.

The average kid’s birthday party in Britain cost around £218 in 2016. One sixth of British kids, though, never have a birthday party, and only a third have one every year. Figure them into the average and the spending’s got to be pretty wild at the top end.

I had a link to that but who really cares?

The kids’ parties I’ve seen around here are on the reasonable end of the spectrum, involving a cake, a bit of real food, and a free and active germ exchange.

Oxford has an Isis Close. That doesn’t mean the organization called Isis is close. A close is a cul-de-sac—a dead-end street. And the stretch of the River Thames (pronounced “Tems”: don’t ask because it won’t help) that runs through the city is called the Isis. Figuring out why is as much fun as figuring out why Britain’s called Britain.

Wikipedia said, when I checked, that “’The Isis’ is an alternative name for the River Thames, used from its source in the Cotswolds until it is joined by the Thame at Dorchester in Oxfordshire. It derives from the ancient name for the Thames, Tamesis, which in the Middle Ages was falsely assumed to be a combination of ‘Thame’ and ‘Isis’”

Another site warns us not to “blindly accept the authority of something that you find on the internet” (very wise; you might want to give that some thought before you take me too seriously) and offers two apparently authoritative and conflicting derivations: Isis is Celtic for “Tranquil River” or “Smooth River” and it’s Celtic for “Dark River.” It goes on to mention rivers with similar names: the Tamar (dividing Cornwall from Devon) and the Tame (in the Midlands). Tame, it says (repetitiously repeating itself), is Celtic for “‘Dark One’ or ‘Dark One.’” Or quite possibly for “Dark One.” You can never be sure with these ancient languages.

It all gets weirder from there, with side trips into Sanskrit and Magyar (that’s the language of the Magyar people, who settled in what’s now Hungary) and words whose pronunciation is nowhere close to Isis, so we’ll stop.

Oh, hell, I can’t let us stop there. It’s all too weird to walk away from. The Magyar word Nedű, means “liquid,” it tells us. Why does it tell us that? I have no idea. Then it mentions the Szamos, which seems to be a river in Transylvania. It has problems with cyanide pollution and doesn’t, as far as I can figure out, sound a whole lot like “Isis.” Or “Thames.”

Then we get to unexplained mentions of the rivers Don and Danube, which clearly do sound a lot like “Isis” in spite of not having a single letter in common. Or maybe they sound like “Thames,” which they share a silent E with. It’s hard to tell.

At this point, folks, it really is time to leave and go back to cozy old Isis Close, where PayPal’s algorithm says you can’t buy anything online because you’re a security risk.

Somebody else’s algorithm has now added me to a new watch list because I’m writing about Isis. Oh, Great Algorithm, please know that I’m a Jewish atheist lesbian. I can be a lot of trouble, but I’m really not a natural fit for Isis the organization.

But we were doing surveys, weren’t we?

An assortment of names and words get blocked on the internet because they contain hot-button letter groups, and all sorts of people like to make lists of them, so let’s play Find the Naughty Word. Blocked words include: shitake mushrooms; the family names Cockburn and Callahan (I’ll give you some help with the second one; it contains the letters allah; really; that’s enough to get it blocked; what happens if you’re actually writing about religion I can’t imagine); Superbowl 30 where it appears as Superbowl XXX, making it sound like it’s triple X-rated; the Horniman Museum; and the town of Penistone. A blogger friend who worked at the University of Essex used to run into trouble as well. As have specialists whose resumes—because, you know, they’re specialists—(I’ll give you some help here too) include the letters “cialis.”

Devon has a town called Crapstone. I don’t know if that gets blocked or not. I just thought it belonged on the list.

Oxford’s Isis Academy gave up the fight and changed its name to Iffley Academy.

Other problematic addresses include Crotch Crescent in Oxford, The Butts (you’ll find them everywhere in Britain, presumably because butts were where people practiced archery), Hooker’s Road in Walthamstow; and Gropecunte Lane (now called Love Lane) in London. A Gropecunte (I’m not sure about the spelling there) Lane in York was changed first to Grope Lane and then to Grape Lane. Sherbourne Lane was once Shitteborn Lane, and since we’re going historical here, Shoreditch once had a Sound Arse Alley.

The list goes on, but having grown up with a different set of insults, euphemisms, and forbidden words, I didn’t get half the jokes so I won’t repeat them.

65 thoughts on “A survey of British surveys”