Skip to primary content
How do the British celebrate April Fool’s Day?
Dangerously. The newspapers–or at least some of them–sneak in a fake story and wait like giggling ten-year-olds to see if anyone spots it.
Late in the day on April 1–some good long time after I’d read the paper–I remembered the date and realized I hadn’t spotted any obvious April Fool’s joke. That made me nervous. What had I fallen for? That the school funding crisis could swing the election against the Conservatives? Nope. I’ve followed that story. It’s real. That the candy company Ferrero says Britain leaving the customs union and the single market when it leaves the E.U. “could affect an array of chocolate products, leading to shortages, delays, higher prices, limited ranges and merchandise going stale in warehouses.”
Good candidate. It’s not going to send anyone into a War-of-the-Worlds type panic. Or maybe a few people, but not many. Still, it’s not far enough out there for a prank story. 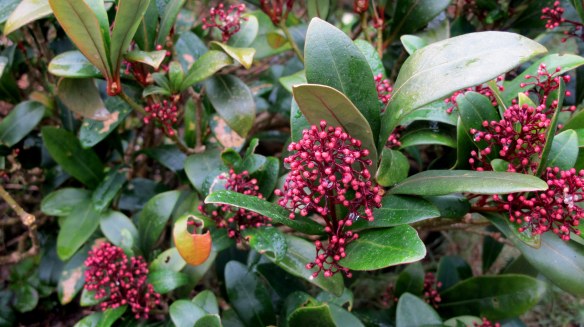 Irrelevant photo: Yet another whatsit plant, in bloom. We grow a lot of them and they have a surprising range of blossoms.

Full disclosure:I’m doing a small bit of lying for the sake of verisimilitude. And I’m using long words for the sake of impressing you. I didn’t actually go back over the headlines to see what I’d fallen for. When I started writing this post, I called up the headlines from the Observer, the Guardian‘s sister paper, to remind myself what they were that day. My memory, sadly, is more decorative than functional.

By then, the real fake story was making small headlines, because a pair of BBC presenters had broadcast it. It was a story claiming that an Italian tech firm had created emojis for the opposing sides of the Brexit debate, and it quoted members of parliament who were outraged by how divisive they were. One emoji was called the Brexit Bulldog and the other Starry Blue, which picked up on the European Union flag. I mention that because I can’t remember knowing what the E.U. flag looked like before I moved to Britain. Or possibly before the Brexit debate.
When the BBC presenters were told what they’d just stepped into, they did two things: One, admitted it to their listeners (“sheepishly,” according to the story I read; bravely, in my opinion), and two, said, “Oh my goodness.”
Or one of them said that. Surely no two people would actually say “oh my goodness.” It’s improbable enough that one of them did.
But the Observer wasn’t the only media outlet playing April Fool’s gags. A different BBC show ran a story on a kraken, a legenadary sea monster said to live off the coast of Norway and Greenland, being spotted on the Thames. The Mail said Prince Harry’s stag party would involve laverbread smoothies and chakra realignment.
A few companies piled in as well. Coca-Cola announced that it was releasing avocado-flavored Coke. Burger King swore it would be selling a flame-grilled chocolate patty with raspberry syrup and vanilla frosting. Plus candied oranges and a bun made of cake. And Heinz was coming out with chocolate mayonniase.
The West Yorkshire Police announced that they now have a police rabbit. It wears a little blue police harness and looks fearsome.
Historically, my favorite spoof is from 1977, when the Guardian ran not just a story but an entire seven-page supplement on the island of San Seriffe, commemorating the tenth anniversary of its independence from I’m not sure who. Wikipedia–that most reliable of sources (actually, it doesn’t do badly)–says it was one of the most successful recent hoaxes. If you consider 1977 recent, which, being 103, I do.
San Seriffe was revived in 1978, 1980 and 1999.
The name, in case you don’t live and breathe this stuff, refers to a kind of typeface. Typefaces come in two flavors, serif, which kind of melts outward at the bottom, as if the pavement’s too hot, and sans serif, which runs downward in a straight line and could be driven into the ground if you had a tiny little mallet.The S is silent. Or if you like it better, blends into the S of the next word.
April Fool’s Day had passed when I read the Wikipedia entry, but I do wonder about that seven-page supplement. I’ve never worked in newspaper publishing, but every kind of publication I had anything to do with was printed in multiples of four. You could, if you really had to, cut a four-page sheet in half and get two pages–one sheet of paper printed on both side–but since paper inherently has two sides–. You see the problem, right? I suppose you could run a page of ads and call that not-part-of-the-supplement but I feel this pull on one of my legs when I so much as think about it.
I could be out of date–I’ve been gone for eleven years now–but when I was still living in the U.S., all an adult had to watch out for on April Fool’s Day was silly phone messages. You know: Please call Mr Bear, followed by the phone number of the nearest zoo. Or kids switching those unpeeled hard-boiled eggs you’d left in the refrigerator for the uncooked ones.
What’s the history of April Fool’s Day? According to the Metro, there’s an ambiguous reference to April Fool’s Day in Chaucer (1390s), and then no written reference for the next 300 years, when in 1686 there’s a reference to “Foole’s holy day.”
Thirteen years after that, “On April 1, 1698, several people were tricked into going to the Tower of London to ‘see the Lions washed’, which was perhaps the first large-scale April Fool in British history.”
The Metro also says Scotland celebrates April 1 with Hunt the Gowk Day. “The pranker asks the prankee to deliver an envelope requesting help, but instead the message inside reads: ‘Dinna laugh, dinna smile. Hunt the gowk another mile.’ The recipient, upon reading it, will explain they can only help by contacting another person, and sends the victim to this next person with an identical message, producing the same result. And if that’s not enough, they also celebrate Taily Day on April 1, which involves “trying to put ‘kick me’ signs on people’s backs, plus plenty of posterior-based jokes.”
I was inclined to think this was all an elaborate joke, but I find enough references to both to think they’re probably real.
April Fool’s Day isn’t specifically British. Lord Google tells me that some version of it is celebrated–if that’s the right word, which I suspect it isn’t–throughout Europe and in Iran, India, Lebanon, the Phillipines, many Spanish-speaking countries, and the U.S. I can testify that it’s celebrated in the U.S. Beyond that, on this subject I’m not taking anybody’s word for anything.