May Day’s over for rhis year, but let’s talk about traditional British celebrations anyway.

First the really exciting part: Most people pay it about as much attention as they pay April 30. They rumble off to work if it’s a work day. They clean up the hairball the cat left on the end of the couch. They save a couple of rubber bands in little plastic dish that came with the plums they bought at the supermarket. Or maybe that business with the rubber bands is just me. I’m not British-British, just Americo-British. We can’t judge the British by what I do. An English-British friend saves them in a drawer. Maybe that’s more culturally appropriate.

But you see what I mean. So what if it’s May Day? Who notices?

Still, traditions are traditions, and even if people mostly ignore them we’re going to take them seriously. Because as an immigrant, I pay attention to this stuff.

The celebration of May Day goes back to the Roman celebration of Floralia, which honored (or something’d) Flora, the goddess of flowers. It also goes back to Celtic traditions and the celebration of Beltane. Or so an assortment of websites say. How much anyone really knows about ancient celebrations that left no direct line of believers or practitioners is anyone’s guess, but what the hell, modern mythology creates its own traditions. I’m in no position to complain about other people taking things seriously.

We could take a minute here to argue about whether Celtic’s a useful category, since it the Celts didn’t call themselves Celts, but let’s break with the tradition here at Notes by not getting too sidetracked.

May Day also–or so they say–goes back to the Anglo-Saxons.

When a tradition has this many origins it’s either something ancient people had a very powerful need to celebrate or else modern people are making it up. The choice is  yours.

Were any of these celebrations actually on May Day? Beats me. Months aren’t what they used to be and I’m doing well to keep track of the 2018 calendar that hangs on my wall, never mind the ones they used way back when. What I can tell you is that some websites say May Day is celebrated because it’s the start of summer but others say Britain’s meteorological summer begins on June 1 and the astronomical summer starts on June 21. They don’t say a word about May 1.

Are you confused yet? Good. We’ll begin with me repeating that we might want to take some of the ancient traditions with a few grains of salt, and some modern ones might need–. Oh, dear. I just googled “hangover cures,” thinking Pepto Bismol might be either out of date or too specific to the U.S. The list of cures Lord Google offered included pickle juice, coconut water, miso soup, bananas, and leafy greens, but none of them have the universal tang I was looking for.

The list did remind me that the world’s moved on since my last (and only) hangover, when I thought mashed potatoes would help.

They didn’t. But that digression does prepare us to talk about Cornwall’s own May Day celebration in Padstow, Obby Oss Day. Without in any way calling its pedigree into question, I’d still recommend taking it with a grain of mashed potatoes.

No one knows what Obby Oss Day’s origins are, but it’s been going on uninterrupted for hundreds of years and may be connected to Beltane. It also may not be. Either way, it’s legitimately old. It involves drinking, singing, flowers, and a oss. Or maybe that an oss. I was allowing an absent but imaginarily present H, but–oh, never mind. I’ll just avoid letting the words bump up against each other from here on. 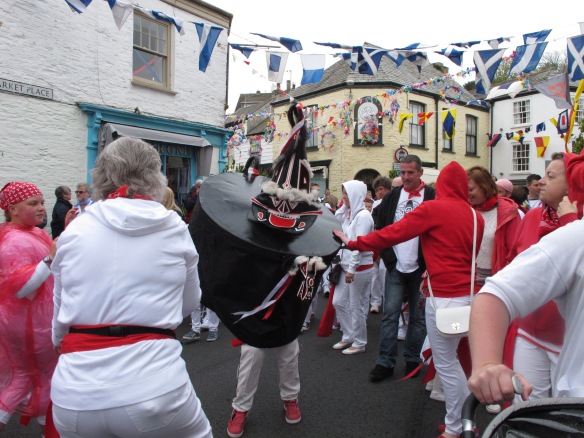 A relevant photo–something so rare it’s an endangered species: This is the red Obby Oss.

The Padstow Obby Oss website says, “Before the First World War there was only one hobby horse in Padstow, the old oss, but in 1919 the blue ribbon obby oss the was introduced. Also known as the temperance oss, its supporters tried to discourage the drunkenness associated with the custom. There are records of a few attempts to tackle the sometimes raucous behaviour associated with the festival, but none have ever worked. During 1837 some residents did not approve of people firing pistols in the air during the celebrations, and so rallied together to try and stop it by putting up posters which threatened people who did fire guns with a fine.”

I’m not sure when that business with the guns stopped, but it’s in the past now. The drinking continues. A friend who not only goes but takes time off work so he can dedicate himself seriously to the celebration says it rumbles on into May 2, but only local people know about that part.

The drinking and the singing are legendary.

More generally, according to WikiWhatsia May Day was originally a religious holiday but survived as a secular celebration when Europe became Christian. Much later, it was banned by the Puritans, who caught a whiff of its non-Christian origins and suspected that people were having fun. I’m not sure which they considered worse.

It was brought back in 1660, when the monarchy was restored.

Dancing around a maypole and crowning a May queen are also traditional.

Inevitably, I googled “maypole dancing” and when predictive text offered me “maypole rentals” I was about to use it to show that dancing around a maypole is still popular, but then I followed the link and it turned out to be for rentals in a place called Maypole. So never mind that.

Still, there’s another way to make the argument: Cornwall LIve reports that maypole sales are growing and traditional May Day activities are drawing crowds the like of which they haven’t seen for years.

Why? Because collapsible maypoles are now available the they can be stored and used the next year.

Who knew they had to be bought? I thought they came from the woods. Or the air. And who knew that someone could make a living teaching maypole dancing, but the article quotes someone who does. I never even stopped to think that it had to be taught, but if the dancers can avoid tying each other to the mast, I guess that’s good.

And May queens? If a village crowns one, it will choose only one, and she may be balanced out by many men dressed as the green man. Any man, it seems, can decide to be the green man, but god help the woman who crowns herself the May queen instead of waiting sweetly for someone else to pick her.

Excuse me while I hide in the corner and puke without in any way calling your attention to myself.

In fairness, Historic UK gives us the lone May queen balanced by a single Jack-in-the-Green, who would lead the procession.

What procession? Why, the one associated with May Day, silly.

I’m not sure if the green man and Jack-in-the-green are the same character. We’re into more ancient legend and modern interpretation. One website dates the green man back to Rome, but another part of the same site says the label dates back no earlier than 1939. We’ll save all that for a different post.

Before we go, though, no roundup of ancient legend and modern interpretation is complete without a quick visit to Glastonbury, a city with a reputation for being–. How am I going to put this? Alternative. Alternative to what? You name it.

Glastonbury seems to go all out for May Day. No collapsible maypole for them. Men dressed as the green man carried a maypole made from a tree trunk and a fire was lit in (presumably) the Beltane tradition. A series of newspaper pictures shows green men as well a couple jumping the fire. The caption on the fire photo explains that jumping a Beltane bonfire blesses a couple’s union and encourages fertility. I know the world’s changing, but the man in the photo is as likely to get pregnant as the woman is. Or as I am, while we’re at it.

On the other hand, the world’s a wide and interesting place. If literal fertility’s unlikely beyond a certain age, may they find the metaphorical kind in this season of rebirth when the trees put forth leaves, the lambs are shiny and new, and the weeds thrive. And may you find the same yourself.

Stay out of the fire. It’s dangerous.

72 thoughts on “Celebrating May Day in Britain”