Deep beneath the streets of London lurks a monster that knows how Londoners live today–what they eat, how they clean themselves, what gets them through the day. What will it do with the information? Either write a cheesy screenplay and make a fortune or come up through the plumbing and eat everyone it finds. Probably the first, because it’s eating well. It doesn’t need human flesh, which not only fights back but screams. Or at least it does in cheesy movies.

The monster’s called a fatberg, and in the best tradition of promos for cheesy movies, I’ve misrepresented it. The biggest one (roughly 750 meters long) has already been killed and autopsied. The ones still lurking underground are smaller, and although they’re growing, not one of them is alive.

Fatbergs are made of solidified fat, sewage, and all-purpose gunk. And they’re clogging up the sewers not just in London but in other big cities around the country. So British TV being what it is, the big one was autopsied for our viewing pleasure. 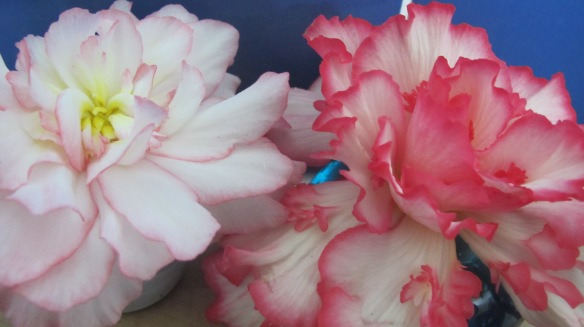 This isn’t just an irrelevant photo, it’s stolen from an earlier post. I’m putting this post together on a toy typewriter and, what the hell, it’s available. Given the topic, we could do with a few flowers.

What do I mean about British TV being like it is? Well, it does a lot of nonfiction, which ranges from glorious to turn-the-channel. This one was somewhere in between. Beyond that, I’m not the best person to sum it up. I figured I was being vague enough that I could get away without having to explain what I meant, thanks. It may not have been enlightening, but at least it’s accurate.

Fatbergs form when a bit of cooking fat–or several gallons of the stuff–is poured down the drain and combines with the calcium it finds in the water to form a solid, which then sticks to a rough bit of sewer wall. Then a wet wipe comes along (wet wipes were the villains of the piece) and sticks to it. Then more fat sticks to that, and anything else that gets flushed down the toilet piles in on top, on the bottom, and on the sides, and while you’re still watching British TV, deep below you is 750 feet of solid crap–in the literal sense of the word– and other stuff blocking the sewer. Whatever gets flushed down the sewer, except the purest of liquids, can be part of a fatberg.

Isn’t your Friday getting off to a great start? Isn’t it just uplifting to read Notes?

So what did the autopsy tell us about how folks live in London? Well, they use cocaine, ibuprofen, caffeine, syringes and needles, paracetamol, morphine, heroin, condoms, magic mushrooms, steroids and gym supplements, tampons, amphetamines, sweetcorn, and hair tonic.

It’s the hair tonic that does the damage.

You didn’t think anyone has used hair tonic since the 1950s? Or maybe that was the 1920s? I didn’t either. I suspect they mean–to use a technical phrase–is hair goop. Or what the British call products. Not even hair products, just products. As if nothing else gets produced in the country.

A word about paracetemol: When my partner, Wild Thing, and I first moved to Britain, we figured it was some strange oracle the British consulted about aches and pains. Every country has its superstitions. As an outsider, you learn to live with them and not make funny faces. It turns out, though, that it’s what Americans know by the brand name Tylenol.

It’s not that Americans are more heavily oriented to brand names than the British. The British call vacuum cleaners hoovers, and using one to clean the floor is hoovering. Presumably Hoover made the first vacuum cleaners to hit the market here. The thing is, the British and Americans choose different things to call by brand names, making us sound eccentric to each other. But that’s a different post. Let’s go back to the fatberg.

So, Londoners use paracetemol. They also eat out a lot, because restaurants are the source of a lot of that cooking oil. The pattern is use, cool (presumably), pour down drain. Of course, home cooks contribute their share. From each according to their deep fat fryer…

And our bodies contribute whatever we put into them. The residue from prescription medicines, including antibiotics and estrogen. All those lovely bugs that cause digestive disasters–e coli, campylobacter, listeria. And antibiotic-resistant bacteria, although those may not come directly from us but from the uncontrolled combination of antibiotics and biota. I don’t know that. I’m guessing.

The things we drink out of also makes a contribution. Plasticisers from cups and plastic bottles can  mimic estrogens, and they’re in there too. The ones that don’t get trapped in fatbergs make their way into the rivers and oceans, doing some very weird stuff to the fish.

The folks whose job it is to free up the sewers do it the modern way: by hand. They suit up, drop down into the sewers with shovels, and chop pieces off, which their buddies up top winch to street level. They manage not to pass out from the smell, or even complain about it. The only high-tech part of the job (and we’re relying on my memory here, which is an iffy proposition) is the gizmo (I love high-tech words) that beeps when it finds a toxic gas buildup.

On screen, they were not only good humored but very funny. In short, they’re heroes.

What can we learn from this? That image tourists have of historic Britain? It’s not the whole picture.

72 thoughts on “Beneath London’s streets”