When Boris Johnson became Britain’s foreign secretary, he had to give up his–well, I don’t know if I should call this his day job or his night job, so let’s say his newspaper job. He was a columnist for the Daily Telegraph while he was a member of pariliament.

It’s not unusual for MPs to have outside jobs–roughly a fifth of them do. After all, their basic salary is only £79,397 plus expenses. It’s tough, but in this age of austerity what more can they expect? They have to set an example for the nation.

And the expenses? Well, after the 2009 scandal, when it turned out that one MP had claimed for a duck island and another put in a receipt for having his moat cleaned (and both claims were accepted), expenses went down for a while. Then they started up again. and in 2014 -15 they ranged from a low of around £4,000 to something in the neighborhood of £200,000. 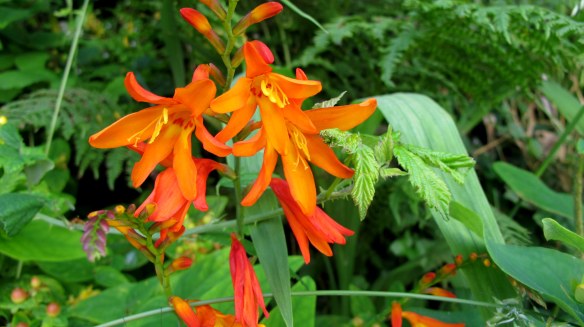 Irrelevant photo. This, dear friends, is a flower. A montbretia, to be more exact–an absolutely gorgeous wildflower that spreads like mad and gives gardeners the heeby-jeebies.

Expenses are supposed to cover travel, the cost of living in London while parliament’s meeting (or in their constituency–it’s complicated, but it depends on what they claim as their primary residence; did you really want to know?), and the cost of running an office. But every so often, you know, the moat really does need a good cleaning. Mine has gone way beyond the limits of decency, but I’m waiting till I get elected because the maintenance on the damned things is just ridiculous.

But back to Boris Johnson having an outside job. Now that he’s no longer in the cabinet, he’s free to make a little much-need money, because who can live on £79,000 plus up to £200,000 in expenses? The Telegraph took pity and rehired him. For £275,000 a year, in return for which he writes a weekly column that he’s said takes ten hours a month to write. That’s £2,291 per hour. Or I trust it is. I’m riding on someone else’s calculation there. Given my gift for math, it’s better to trust even the least reliable source than mess it up myself. That way if it’s wrong I get to blame someone else. In 2009, he described the income from his column as chickenfeed.

I’d love to see the size of his chickens.

A Costa Coffee ad has been banned from the airwaves because it bad-mouthed avocados. According to British advertising guidelines, ads aren’t allowed to discourage people from eating fruit and vegetables.

The ad talked about avocados taking 18 days, 3 hours, and 20 minutes to ripen, then going bad after 10 minutes. Costa has argued that it was only joking. The Avocado Defense League has said it doesn’t care.

Full disclosure: There is no Avocado Defense League. Two listeners and half a dozen highly distressed avocados complained to the Advertising Standards Authority, but it wasn’t a coordinated effort.

In the process of making sure that the league didn’t exist (it’s a strange world out there and you never know until you check), I learned two things;

One, that drug cartels have been extorting money from Mexican avocado growers, because avocado export is big business. The war on drugs has had some very weird results. That’s a more important story than an anti-avocado ad, but I’m a sucker for a silly story and I can’t find much to laugh about in the serious one.

Two, that some economic sages think the reason the millennial generation is broke is because they eat avocados. On toast. The reason these kids can’t buy a home, they say, isn’t because housing prices are too high, wages are too low, and work too unstable. It’s because the silly little hedonists frivel their money away buying avocado toast.

That’s calculated on the basis on one serving of avocado toast a day.

Four East London schools closed because they were infested with false widow spiders, which can bite but don’t seem to have gotten around to it. They were too busy keeping up with their homework.

False widows arrived in Britain in 1879, in a bunch of bananas from Madeira disguised as real widows, black veils and all. Having been in the country for this long, you’d think they’d have graduated by now, but homework’s difficult when pens and pencils aren’t made for your species and you don’t have internet access.

There are four species of false widow in Britain. The ones in the London school are the noble false widow, the biggest of the bunch at around 14 mm (the males are smaller, 10 mm, or roughly a third of an inch). Still, compared to a pencil, that’s not very big. I’d make a joke about noble false widows but I can’t think of one that works well enough to be worth our time. It’s a car crash of a name, though.

And in case you’re as clueless as I am, Madeira’s an island off the coast of Portugal. Politically, if not quite geographically, it’s part of Portugal. It’s one of those places I didn’t know I couldn’t locate until I had to locate it.

A new typeface, sans forgetica, is supposed to help readers remember what they’re read. The theory is that by making readers work to decipher what they’re looking at, the font will–okay, I’m making this up on the spot, but it sounds credible–engage more of the brain, making the content harder to forget, or possibly even easier to remember. The font’s back-slanted and the letters have gaps that make it hard to read. I read a small piece of an article in it and have no memory of what it said. You’re welcome to try it if you like.

If you’re thinking of using it, my advice would be to forget the font and the make the content more interesting.

Britain had another royal wedding: Prince Andrew’s daughter Eugenie married–oh, somebody or other. He works as a brand ambassador for a tequila company.

This is a job?

Andrew apparently wanted the BBC to cover the event live and in full, excruciating detail but it declined, so ITV stepped in. Three cheers for keeping the public up to date on the things that affect our lives. The aforesaid public didn’t pick up the cost of the wedding but paid for the security, which an anti-monarchist group estimates at £2 million.

I wasn’t invited. It’s all very sad, because I have a very nearly respectable pair of black jeans that I’ve been meaning to wear someplace only somehow I never do because they’re too dressy for most of the occasions I’m welcome at.

Our solar system has a newly found dwarf planet on its outskirts, somewhere beyond Pluto. It’s been named the Goblin. Astronomers found it while they were looking for a large planet they assume is out there but haven’t located, which they call Planet Nine. The Goblin seems to be under the gravitational influence of something large but so far unseen, so the find adds to the belief that Nine is out there.

The Goblin’s formal name is 2015 TG387, but a member of the team that discovered it explained that “human examination of the candidate slow-moving objects occurred in roughly the Halloween timeframe.”

You followed that, right? It was close to Halloween when they found it.

A free speech row has broken out over the use of the word bollocks. The founder of a London plumbing company, Charlie Mullins, was told to take down a sign saying, “Bollocks to Brexit,” which is highly visible above the company’s office.

It replaced a sign that read, “Nobody voted to be poorer,” which hung there for six months without offending the council (which is British for the local government), so Mullins is assuming the problem is the word bollocks, although he points out that a 1977 case involving the Sex Pistols ruled that the word is not obscene.

The definition of bollocks–and if you’re not British you might need this–is either testicles or nonsense, rubbish. Its origin is Middle English, which is irrelevant but interesting. At least it’s interesting if you’re something of a language geek.

Mullins said he’s prepared to go to jail but he’s not taking the sign down. To which the council says, “Bollocks.”

A Banksy spray painting was sold at auction for more than a million pounds. Then it shredded itself.

It shredded itself. Or the lower half of itself. Banksy–a graffiti artist who’s managed to stay anonymous while building a worldwide reputation–had somehow rigged a shredder into the frame and the canvas dropped itself neatly down into the blades, emerging in strips just after it was sold.

As I write this, a lot of things aren’t clear, including how it was done, who bought the painting, whether the auction house will hold the buyer to the contract, and whether the piece is now worth more or less or nothing at all. [A late note: The buyer decided to buy it anyway. What’s it worth? Probably a lot more. The world is insane.]

Now that Toronto’s rid of the mayor who was caught on video smoking crack, you’d think its problems would be over, but they’ve only just started. Raccoons are riding the subways. They’re breaking into banks, crashing baseball games, and stealing donuts.

One resident found three in her kitchen eating bread. Two ran off but one not only held its ground, it grabbed hold of the broom handle the woman poked at it and yanked it. Which for reasons I can’t entirely explain seems more threatening that just grabbing the thing.

A great deal of growling and hissing went on, all of it on the part of the human.

When the raccoon had eaten every bit of bread in the house, it yawned, scratched its belly, and left through the window. The woman locked the window and the raccoon spent the next two hours scratching to get back in. It must have seen the stale hamburger bun that fell behind the refrigerator the week before.

At one point, the city tried to deal with its raccoon problem by introducing a raccoon-proof trash can with a hand-turned lock. In no time at all, the little beasts had figured out that they could tip them over, triggering a gravity-operated opening mechanism that allows the cans to be dumped into trucks.

To date, no one’s caught the raccoons smoking crack on video. They’re too clever to do it around anyone with a phone.

Salisbury’s image has been tarnished this year by the Novichok poisoning first of a Russian resident and his visiting daughter and then, just when the city thought it might recover, of two homeless people who picked up the bottle used to transport the poison. Visitor numbers are down. Business is suffering.

What does a city do in a situation like that? Why, it hires consultants, and it asks them to rebrand the city.

In September, Megan Markle–the newly minted Duchess of Wherever and wife to Prince Whoosit–was caught on camera closing her own car door.

Yes, folks, that’s print-worthy. The BBC interviewed an etiquette and protocol coach, William Hanson, to make sure the monarchy would survive. He was reassuring and said it wasn’t a protocol breach.

I’m sure you’re as relieved as I am. If you’re not, you should be. The Guardian was so relieved that it printed rumors about what Prince Charles, Meggy’s newly minted father-in-law, won’t do for himself. You’re welcome to chase the full list down if you’re interested, but my favorite is that he has a valet iron his shoelaces.

93 thoughts on “News from Britain. And elsewhere”