With climate change threatening grain crops, researchers have isolated a gene in barley that will–thank all the gods you may or may not believe in–ensure that the world’s supply of scotch is safe for the foreseeable future.

The gene is one of more than 39,000 and it helps barley survive drought. Or to be more accurate about it, “when it’s prominently expressed” the plants are better able to survive drought, so resistant crops can be planted in the future. Assuming that the extreme weather that barley-growing regions face will be drought, not flood, although a mix of the two isn’t out of the question.

The new plants will, presumably, also be good for the food supply, although that didn’t make it as far as the headlines.

Irrelevant photo: California poppies. Californians or not, they grow well in Cornwall and once you get a few going they’ll self-seed. Generally in places where you didn’t want them but they don’t object to being moved.

The pope got stuck in an elevator in the Vatican in September. Not for all of September, just 25 minutes of it. I hope I’m not the only person who finds that funny.

Unrelated to that (although I’m sure I could manage a very nice segue here if I cared enough), a Catholic school in Tennessee pulled all the Harry Potter books out of its library because “the curses and spells in the books are actual curses and spells; which when read by a human being risk conjuring evil spirits into the presence of the person reading the text.”

A group of parents wrote to a local radio station anonymously, questioning the ability of the priest responsible to “critically assess and discern fact from fiction.” They didn’t question his use of the semicolon, but they should  have. It’s diabolical. And also wrong.

As far as I can remember, J.K. doesn’t include a spell for removing a pope from an elevator (or a priest from a school). If she had, I’d write the pope (he’d be thrilled to hear from me) and recommend the books.

There’s your segue, at the end instead of the beginning, but in troubled times like these, you take your segues where you can get them.

In all my coverage of Brexit, I haven’t mentioned the demonstrators–pro and anti–who gather outside parliament and make noise when the newscasters turn on their mics and try to explain the latest Brexity zigzags. At least one of the demonstrators plays bagpipes. Others bellow. And one–. I’m going to have to quote from the Guardian here, because it puts it gorgeously. It talks about “the largely inexplicable presence of a man with a glockenspiel playing the ‘Imperial March’ from Star Wars.”

Which is one way to get your voice heard, even if no one knows what your voice is trying to say.

Or maybe he’s just found a place to practice his glockenspiel where he won’t annoy his family, just the reporters.

A truck (that’s American for lorry) carrying 7,039 gallons of concentrated gin was in an accident in Cheshire in September. If you need that in liters, it’s 32,000, although I suspect someone’s rounded it up or down to the nearest something or other. Once you get past the first shot or six, you don’t really care, do you?

Concentrated gin? It was news to me as well. According to the Langley Distillery, the distilling process produces something that’s “between 78%-82% ABV and cannot be used alone to make gin. We blend the concentrate with neutral alcohol, to create high strength gin that is reduced with water to bottling strength.”

The missing 22%-18% in that first sentence is made up of adjectives that the distellery lovingly applies later in the description but we can’t afford them this late in the evening, so we’ll stagger home without ’em.

ABV means alcohol by volume, so 82% should be enough to put us under the table nicely enough.

Neutral alcohol? Oh, hell, you don’t want to know. Or maybe you do but I don’t. It’s stuff you put in gin. What’s more interesting is that the concentrate is flammable, and the local fire and rescue folks spayed it with fire retardants to keep it from going whoosh.

I had a moment of thinking I was living in a land flowing not with milk and honey but with gin and fire retardant–or gin and fire retardant and drunken, fire-proof fish–but no. Not all of those 7,039 gallons leaked out. They managed to control the leak and pump the remainder into another tanker.

The BBC reported that people sat in their cars for up to four hours while police, fire fighters, and local drunks worked to clear up the spill.

The head of Prime Minister Boris Johnson’s social media team, Chloe Westley, defended someone or other against charges of misogyny by saying that young women have been “misled by feminists” into thinking they were being discriminated over pay.

The full quote is, “Young women in Britain are being misled by feminists. Take the stories over the weekend based on ‘Equal Pay Day’. We’re told that there is a ‘gender pay gap’ between men and women, and that this is due to rampant discrimination. But this gap is simply a comparison of the average salaries of men and women: it’s not indicative of any kind of discrimination.”

So why does this happen? Why, women’s choices, of course. Silly creatures that they are, they chose to have biological equipment that allows them to get pregnant, and a significant number of them use it. Then instead of putting the kids in a dresser drawer till they get home from work, they stay home to keep the little creatures alive. Or they pay startling amounts of money so someone else can keep them alive and go back to work, but when the kids get sick what do they do? They stay home with them. Why? That dresser drawer’s still available.

No wonder they get paid less. If men carried on like that, I ask you, where would the human race be?

“Jacob Leeks-Mogg” took second place in a vegetable characters competition. It’s a spoof of Conservative MP Jacob Rees-Mogg, leader of the House of Commons and now famous for lounging on the Commons benches during a Brexit debate, more or less as seen here. 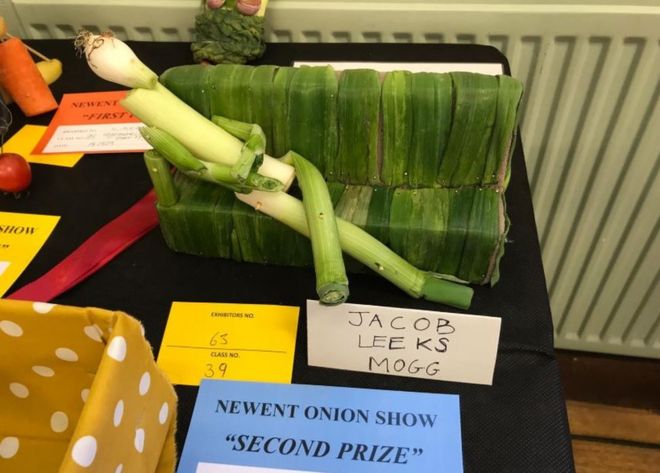 “Jacob Leeks-Mogg.” Thanks to Deb Croxford for sending me a link to this deathless piece of art, which has either wilted or been eaten by now.

Meanwhile, in the U.S., two scientists in New Jersey found a baby two-headed rattlesnake. Since both scientists are named Dave, they named the snake Double Dave and took it into protective custody. Two heads, it turns out, are not better than one. They make the snake slow, and since they both operate independently they sometimes fight over food, not understanding that it doesn’t matter who swallows the food, it goes into a shared digestive system.

There’s a moral in there somewhere, for all of us.

The snake wouldn’t be likely to survive in the wild.

And since we’re dropping in on other countries, a cult theory holds that Bielefeld, Germany’s twentieth-largest city, doesn’t exist. Don’t ask me to explain how this started, but the joke’s been going for twenty-five years and the city is now running a contest, offering a million euros to anyone who can prove that it doesn’t exist.

In France, a court ruled that a rooster named Maurice can keep crowing. A couple–retired farmers, ironically–had complained about Maurice, and the case has been working its way through the courts for two years, sparking a social media I am Maurice campaign.

Other complaints about rural noises have targeted frogs, cicadas, ducks, and geese.

Humans are a difficult species.

Before we leave, let’s go back to Britain for a feel-good story. Bradford was once home to a bustling Jewish community, but the 2011 census records only 299 residents who identify themselves as Jewish. (It’s hard to know what that means, since the question might have been about religion or it might have been about ethnicity. But never mind–that’s a side issue.) Bradford’s lone synagogue was down to 45 members and almost shut down in 2013, when the cost of fixing the roof outran the outran the money it could raise. (Forgive me for even bothering to say this, but some people still need to hear it: Whatever you’ve been told, not all Jews are rich. We cover the full economic spectrum. And, oddly enough, we don’t run the world.)

What happened next was that the Muslim community (129,041 in the 2011 census) stepped in and raised the money, which led to a lottery grant that covered other repairs.

The connection was made by a Muslim self-taught photographer, Nudrat Afza, a Pakistani immigrant who became friends with the synagogue’s 93-year-old chairman, Rudi Leavor, who came to Bradford as a refugee from Nazi Germany.

And that story should echo out into a small and perfect silence. Hold it in your heart.

72 thoughts on “The news from Britain: gin, scotch, and the gender pay gap”