As we watch the spread of coronavirus, it’s sobering to remember that when the bubonic plague swept through Europe–this was in the middle ages and later–people (understandably) fled, and some number of them (inevitably) carried it with them to new cities, towns, and villages, helping it meet new people and (in many cases) kill them.

Silly people, you’ll think, even as you wonder if you’d have the strength to take your chances in a plague-hit town. (You’ll notice how neatly I tell you what you think. So neatly that you barely notice I’m doing it.)

Isn’t it good that we’re wiser these days? Because what did countries that were free of the corona virus do when they understood the danger it carried? Why, they evacuated their citizens–or as many of them as they could–along with whatever germs they were carrying.

And what did Britain do about the possibility that they’d brought the virus home with them? Its first move was to tell them to self-isolate–in other words, to stay home. 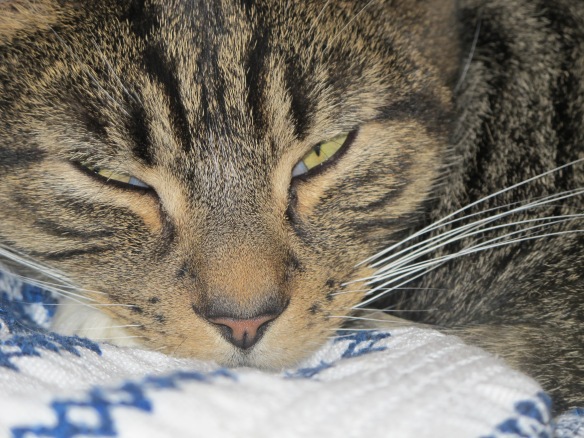 Marginally relevant photo: Pets are wonderful germ vectors. You pet them, you leave your germs on their fur, then–faithless wretches that they are–they go to your nearest and dearest to get petted, because one person is never enough, and they bring your germs with them. This particular germ vector, in case you haven’t met him, is our much-loved Fast Eddie. You’re not seeing him at his fastest.

Could they go out to buy groceries? Well, people do need to eat. But after that, seriously, people, no contact. Except with the people they live with, of course. And with the person who delivers that pizza they ordered, who’ll only be at the door a minute. And of course anyone their families, roommates, and the pizza person come into contact with.

In fairness, figuring out whether to impose a quarantine isn’t an easy call, and I’m grateful that it’s not mine to make, but if you wonder why the virus has spread you might start your wondering with that decision.

The country moved to more serious quarantine measures not long after, but a newspaper photo of a bus that took plane passengers to a quarantine center shows one person dressed like an astronaut to prevent contagion and right next to him or her (or whatever’s inside the suit) a bus driver dressed in a red sweater, a white shirt, and a tie, without even a face mask–the effectiveness of which isn’t a hundred percent anyway.

As for the tie, I’ve never worn one or figured out how they’re tied, but I do know that germs aren’t afraid of them. Contrary to common belief, they weren’t invented to prevent the spread of infection. Breathe in a germ and your tie won’t be tight enough to keep it from reaching your lungs.

So what have we learned since the medieval period? A lot about how diseases work, but less about how to contain them than we like to think. The coronavirus isn’t the plague and doesn’t seem to be the flu epidemic of 1917 either, but it’s instructive to see ourselves flounder.

So let’s talk about a village that, when it was struck with the plague, did exactly what it should have done. Heroically.

In 1665, a tailor in the village of Eyam (pronounced eem; don’t ask), in Derbyshire (pronounced something like Dahbyshuh, at least in the Cambridge online dictionary’s audio clip, although I’m sure other accents take it off in different directions; ditto). Where were we before I got lost in pronunciation? A tailor received a bale of cloth from London. It was damp, and his assistant, who was only in Eyam to help make clothes for an upcoming festival, hung it in front of the fire to dry. That woke up the fleas who’d hitched a ride from London.

The plague had already taken root in London and the fleas were carrying it. The assistant, George Vickers, was the first person in Eyam to come down sick.

Between September and December, 42 people in Eyam died of plague. That’s out of a population of somewhere between 250 and 800. Whichever number’s closest to right, that’s a lot of people in a small place, and a lot of them were getting ready to do what people did in the face of the plague, which is flee. The local museum estimates the population as at least 700.

Enter William Mompesson, the village rector, who felt it was his duty to contain the plague. He’d been appointed only recently, and he wasn’t popular. To make the least bit of sense out of that, we have to take a quick dive into English history and religion. I’ll keep to the shallow waters, so stay close.

Charles II–the king who followed England’s brief experiment with non-monarchical government and anti-Church of England Protestantism–introduced the Book of Common Prayer to the English church, and the Act of Uniformity dictated that ministers had to use it. Most of Eyam, though, had supported Cromwell and his vein of Protestantism. In other words, they were anti-royalist, anti-Church of England, and anti-Act of Conformity. So Mompesson represented everything that pissed them off, politically and religiously.

And Mompesson must have known that, because he approached the man he’d replaced, Thomas Stanley, who was living on the edge of the village, “in exile,” as Eyam historian Ken Thompson puts it. The two of them worked out a plan and in June they stood together to present it to the village: They would, all of them, go into voluntary quarantine. No one would leave. No one would come in. The earl of Devonshire, who lived nearby in the obscenely lush Chatsworth House (although it may not have been quite as overwhelmingly overdone at the time), had offered to send food.

Mompesson’s wife, Catherine, wrote in her diary about the day they presented the idea to the village: “It might be difficult to predict the outcome because of the resentment as to William’s role in the parish, but considering that the Revd Stanley was now stood at his side, perhaps he would gain the support necessary to carry the day.”

People had misgivings, she wrote, but they agreed.

August was unusually hot that year, meaning the fleas were more active, and five or six people died per day. The husband and six children of Elizabeth Hancock died within a space of eight days and she buried them near the family farm. And “buried” here doesn’t mean she stood by the grave demurely, wearing clean black clothes while someone else shoveled dirt in. It means that she dug the graves, dragged the bodies to them, and tipped them in single handed. People from a nearby village, Stoney Middleton, stood on a hill and watched but didn’t break the quarantine to help.

Most of the dead were buried by Marshall Howe, who’d been infected but recovered and figured he couldn’t be reinfected. He was known to pay himself for his work by taking the dead’s belongings. Or he was said to, anyway. Village gossip worked the same way then as it does now. There are no secrets, but there’s a hell of a lot of misinformation.

Mompesson wrote that the smell of sadness and death hung over the village. He assumed he would die of plague, describing himself in a letter as a dying man, but it was Catherine, his wife, who died of it. She had nursed many of the sick. Mompesson survived.

By the time the plague burned itself out, 260 villagers had died, giving Eyam a higher mortality rate than London’s. No one can know how many people the quarantine saved, but the guesswork is “probably many thousands.”

Mompesson was later transferred to another parish, where his association with the plague terrified people and initially he had to live in isolation outside the village.

Meanwhile, in our enlightened age, a couple of British-born brothers of Chinese heritage shared an elevator with someone who announced, “We’ll be in trouble if those guys sneeze on us.” Other people who are either of Chinese heritage or who assumed to be report having eggs thrown at them, having people move away from them, and being harassed on the street and online.

145 thoughts on “Coronavirus, British quarantine, and the Eyam plague village”