King Alfred–who you might know as Alfred the Great–could reasonably have expected not to become a king. He was the fourth, or possibly the fifth, son–it’s all a little hazy when you’re looking back that far–of King Aethelwulf of Wessex. But King Alfred he became, although we could also call him Aelfred, or if you want to go completely Dark Ages about it, Aelfraed.

In addition to all those sons, there was a daughter in there somewhere, but she was married off to another Anglo-Saxon king in a political marriage and history doesn’t pay much attention to her. Did you ever wonder why so many women develop a sharp edge? It’s not because of her particularly, but she’s not a bad example of what happens. 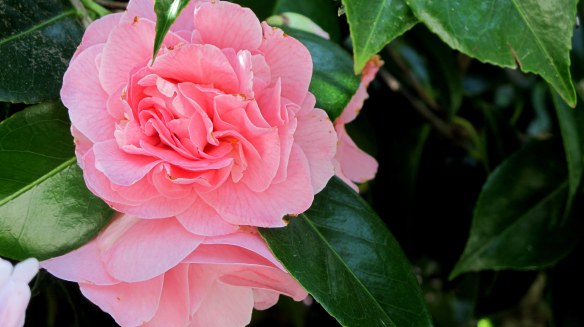 Irrelevant photo: A camellia, stolen from something I posted last year. This year’s are out, though.

Back to our point, though: Aelfred was the king of Wessex from 871 to 899 and nobody at the time called him the Great. King was plenty, thanks.

What kind of place did he grow up in and rule? To start with, Anglo-Saxon England was split into an assortment of kingdomlets. Don’t try to count them because the numbers keep changing, especially once the Vikings invaded. They swallowed one, then another.

Pretty much anything you read about the period talks not just about the Anglo-Saxon kings but also about sub-kings. The sub-kings don’t actually come into our tale, but they’re worth a mention because it’s interesting to know that power was divided up in ways we’re not used to. A king had to move carefully, balancing out the sub-kings’ strength, interests, loyalties, tempers, competence, and possibly incompetence.

Now let’s set them aside and talk about Aelf’s family background, and you should feel free to make fun of the names here because (a) I will and (b) nobody speaks Anglo-Saxon English anymore, so you won’t be stomping on any sensitive toes.

Aethelwulf (that’s Aelfred’s dad, in case you’ve lost track of him already) fought the Vikings and had a bunch of kids. Then his wife died and he married a twelve-year-old, Judith. Unlike the sub-kings, she’ll come back into the story.

AethelW went on pilgrimage, taking youngest son Aelfred, who’d have been four or five, with him and leaving older son Aethelbald in charge of the kingdom. When he came back a year later, AethelB said, “Sorry, Dad, but I’ve kind of gotten to like being king. Now butt out.”

Instead of starting a civil war, AethelW divided the kingdom with AethelB. Then he died, as people will. Son Aethelberht, not to be confused with Aethelbald–let’s call him AethelB2–took AethelW’s throne. Then AethelB1 married AethelW’s widow, who in our times still wouldn’t have been old enough to buy herself a beer.

Yes, it was all very weird back then.

Before anyone had time to say, “It seems perfectly sensible to us,” AethelB1 died and AethelB2 glued the two kingdoms back together. Then he died and brother Aethelred followed him onto the throne.

This sounds like the fairy tale about the billy goats gruff and the troll under the bridge, doesn’t it? Except instead of the youngest brother coming first, the oldest ones did.

I’m happy to report that neither AethelR or AethelB2 married poor ol’ Judith. She went home and later married someone unrelated to either her first husband or this tale. I hope she was old enough to order a beer by then, but I wouldn’t put any money on it.

And we still haven’t gotten to Aelfred.

You may have noticed that Aelfred is missing a syllable that all his brothers got: He’s plain old Ael-Something while they’re Aethel-Somethings. It’s like that when you’re the youngest kid. By the time you get yourself born, your parents are tired. They don’t have the energy to hand out extra syllables. And in a lot of families, money’s tight. In this one, they didn’t seem to be, but they were running short on thrones. If Aethelred hadn’t died, Aelfred would’ve had to sit on a stool or a bench, just like everyone else.

By the time Aelfred got himself a throne, with a wooden back and arms and everything else that signaled his importance, the Vikings had taken over most of England. The Anglo-Saxons called the Vikings the Great Heathen Army, because (a) they weren’t Christian and (b) it’s a lot scarier to be slaughtered by someone of a different religion than by someone of your own religion.

Aelf’s first task was to fight the Vikings, and we’ll skip the list of battles. We don’t have space for enough detail to make them interesting, and without detail you wouldn’t remember them anyway, would you?

Okay, maybe you would. I wouldn’t.

What matters is that Aelf lost, and by 878 he’d been pushed back to a corner of the Somerset Levels, where he and a small band of fighters hid in the marshes, working to gather reinforcements. Eventually he had enough warriors to go on the offensive, defeat the Vikings, and as part of the peace settlement demand that Guthrum, the Viking king, become a Christian. Religion doesn’t seem to have been about deeply held beliefs but about–well, it strikes me as being more like joining a football team and agreeing to follow its rules.

The Vikings eventually all converted to Christianity. Did that bring peace between the Anglo-Saxons and the Vikings? Hell no. It just meant Christians were fighting Christians instead of non-Christians. It meant everyone who died was killed by a co-religionist. You can see how that was a great improvement.

The peace between Aelf (for Wessex) and Guthrum (for the Danelaw, which is what they called Viking England) held for a while, but it wasn’t a stable peace, and Aelf built up his military, fortifying towns, building up a navy to face up to Danish ships, and generally preparing for the time they’d be at war again.

Danish, by the way, was another way to say “Viking.”

Aelf’s theory was that the Viking invasion of England was a result of Anglo-Saxon England’s moral failings, so he set out to remedy them, in part by focusing heavily on education. One step was to demand that anyone in government had to be literate. Another was to set up a court school for–okay, the article I’m working from here  says “noble-born children.” I haven’t found anything that says the wording only meant boys, but I haven’t found anything that says it didn’t. Women were freer under the Anglo-Saxons than they would be later, under the Normans, but that’s a relative freedom, not an absolute one.

It was under Aelf’s rule that the Anglo-Saxon Chronicle was begun. This was a year-by-year account of events, and it continued to be written for some time after the Norman invasion in 1066. It’s one of our few sources of knowledge about the period and a remarkable piece of work.

Aelf also wrote an ambitious law code, which was a mix of new and pre-existing law, threaded through with bits out of the Bible. In it, he wrote, “Doom [meaning judge; it’s pronounced dome] very evenly! Do not doom one doom to the rich; another to the poor! Nor doom one doom to your friend; another to your foe!”

We can learn from this that he was even-handed and just and placed a high value on exclamation marks. Assuming, of course, that they weren’t added by the translator, because however antiquated that sounds, it’s not Anglo-Saxon English.

Aelf was either wise or canny enough to appoint a biographer, which is one reason he’s come down to us as perfect in all ways. Aelf’s biographer wasn’t independent; he worked for Aelf. That can’t help but color a writer’s work. So Aelf was pious, brave, learned, truthful, a man who ate not five but six helpings of fruits and vegetables every day. Even kale, which wasn’t in the supermarkets yet. Supermarkets weren’t even in the supermarkets yet.

And I say that without diminishing his stature. He seems to have been a far-sighted guy, but let’s not get suckered into the propaganda.

In spite of all his wonderfulness, Aelf was never made a saint, and this meant he disappeared from sight for a while. When the Normans took over England, they played up their connections to the Anglo-Saxon kings, but they leaned toward the ones the Church had made saints of, ignoring the ones who were merely saintly. That meant they ignored Aelf.

Much later, when England broke away from the Catholic Church, finding a saintly-but-unsainted king who just happened to have had a good biographer came as a gift to a country struggling to redefine itself. And there Aelfred was, unsullied by Catholic approval. They dug him out, turned him from Aelf (or Alf, by then) into Alfred the Great, and used his writings and translations to prove that the Anglo-Saxon church had been pure before the Normans came along and made it Roman Catholic. As Barbara Yorke puts it, “With a bit of selective editing, [the Anglo-Saxon church] came to bear an uncanny resemblance to Elizabethan Anglicanism.”

The Tudors weren’t the only folks to do some selective editing. In later centuries, Aelf was rewritten in an assortment of ways no one would have predicted. The Victorians held him up as an example to kids–the perfect, and probably deadly dull, person they should all model themselves on. (Go hole up in a swamp and eat kale, children, until you’re strong enough to defeat the Vikings.) He was also dragged into racist arguments to demonstrate how great the Anglo-Saxons were and how inferior everyone else was.

How did Alfred feel about all this? He was past caring–or at least past letting us know his feelings and opinions. I mention it to remind us all that historians aren’t impartial reporters of history. Some start with the story they want to tell then choose their facts to fit it. Others play fair, but even they shape the story.

And I do the same thing. If you don’t shape the story, you don’t have one, you have a scrambled mess of facts.

Besides, I’m not a historian, I just play one on the internet.

My thanks to the Tiny Potager’s oldest kids for suggesting both this topic and next week’s.

88 thoughts on “Alfred the Great: his world and his legend”