Missed the solstice? No problem. You can still take part in a virtual festival, making your own Stonehenge out of the cardboard cores of toilet paper rolls or cookies or some things that look a lot like sugar cubes but could be a lot stranger. I’m not trying to sound like I know something you don’t but would if you were one of the elect, I just can’t tell what I’m looking at a photo of.

If you’re in your teens, you can click on the one-finger salute to find the Quaran-teen section of the site. If you’re not, or want to see what the grownups get up to when they think you’re not around (answer: nothing all that interesting), then head over to the Twitter hashtag and see if it’s worth your time.

I decided it wasn’t, but then I’m not much on festivals, even when they’re real. 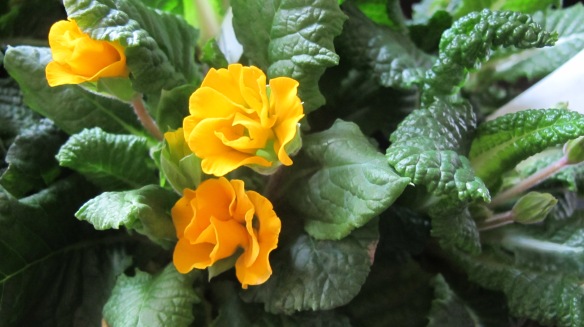 A rare relevant (if out of season) photo. Primroses. The next story features plants. Don’t count on this happening often.

Barcelona’s opera house, the Liceu, will open for the first time since lockdown by live-streaming a string quartet playing Puccini’s “Chrysanthemums” to 2,292 potted plants. The plants must already be in place, because photos of them filling the seats accompany the articles I’ve seen.

None of them are wearing masks.

You can catch the concert on June 22, at 5 pm local time.

The world’s largest liquid air battery is being built near Manchester, so unlike a lot of what I sneak in here this really is British news.

What’s liquid air? I’ve lived in Britain long enough that I thought it was just, you know, air in Britain. It’s a wet country. After Brexit, wet air may be all we’re able to export. But no, liquid air is what you get when you compress air down so much that it turns into–yes! You got it! A liquid.

Doesn’t Britain already have enough liquid? Most of the time, yes, although some people claim, during a fair part of the day, to be perishing for a cup of tea. But in general, yes, lots of liquid. The point of this liquid, though, is to store energy. When wind and solar power are producing excess energy, it uses it to squish that air down, and when the sun goes down and the wind stops blowing and everyone comes home from work (in that mythical world where everyone’s going to work and then coming home) and puts the kettle on for a nice cup of tea, it lets up on the air, turning it back to a gas and in the process powering a turbine that powers something else that powers that kettle.

And that, my children, is how we store green energy. Or how we will as soon as they get this beast built, which should be sometimes in 2022.

It’s being built by Highview Power, whose chief executive is a high-tech guy who says things like, “Air is everywhere.”

He really did say that.

I hate it when tech people can’t explain things simply.

Britain’s lost a lot of money during the coronavirus lockdown, and it’s spent a lot of money trying to get the country through these unprecedented times–some of it well and the rest of it on subsidizing satirists. I don’t know what I’ll do with myself if we ever get a sensible government.

But to our point: Air really is everywhere, and so is incompetence, along with its good friend ProfitingFromACrisis, which (or possibly who) spells its name solid like that because you can never tell what will leak to the press if you leave space between the words. Not that leaks can’t be faced down if you have the right friends, but still, who wants the bother?

Never mind all that, though. It’s what we’ve learned to expect. I want to talk about money well spent.

How do I know it was well spent? I know because the prime minister said so–or at least his news flacks did. It’s “value for money,” they told us, and it’ll promote the U.K. around the world, and besides all the work’s being done in the U.K., so it’s twice the value for–

We’ll skip the math. For £900,000, which will cover the work of repainting the prime ministerial plane so that it looks like the British flag.

Before he became prime minister he complained that it was dull looking–and also that he didn’t get to use it often enough. And you don’t want the prime minister getting bored, do you?

You can never keep everybody happy, though. The plane has to do double duty as an air force plane, and a defense analyst and former military pilot, Andy Netherwood, complained that it will make it useless outside of the safest of safe airspace.

“No one wants to go to war in a jet painted like a brightly colored lollipop.”

Except, being British, he said “coloured.”

At England’s first Premier League football games (which if you’re American are soccer games), the players on four teams, along with staff and match officials, took a knee before starting. The players’ names on their shirts had been replaced with “Black Lives Matter.”

I hope I got the details of that–the number of teams, the plural in games–right. I have a sports allergy, so I’m a little vague on the sports part of this. I’d been going on the assumption that a football game involves two teams, not four, so I’m guessing this was two separate games. Or else it was one, played in some parallel universe where four teams play one game and it takes three parents to make a child.

Did I mention how moving it is to see our government’s competence in action? First it was going to develop its own app to notify people who’ve been to Covid-19 that they need to get tested. This was going to fit seamlessly with a testing and tracing system and all together it was going to be the envy of the world, because what’s the point of having something like that if the world doesn’t envy you?

Then the app’s grand unveiling was postponed because it had a small problem, which was that it didn’t work. Which is pretty much what experts had been saying would happen.

But what do experts know? The unveiling was postponed again while some tinkering was done.

I won’t drag this out. They abandoned it the other day. Britain’s now going to use a Google-Apple app. But it won’t be ready until the autumn because it doesn’t measure distance accurately enough and so it sends out you’ve-been-exposed notices to people who were a safe distance from an infected person.

What they’re going to do is stick the two apps in the oven and bake on a low heat until they meld, at which point Britain’s will transfer its innate sense of distance to the Google-Apple app.

Of course, they may just end up with melted gigabytes, in which case all the combined app will do is let people who think they’re coming down sick report their symptoms. It won’t notify anyone of anything.

The app was initially sold to us as an essential part of the test-and-trace system which was going to get us safely out of lockdown. We’re now coming out of lockdown with no app and a questionable system of testing and tracing. But we’ll be fine. Don’t worry about a thing.

What went wrong with the world-beating British app? Well, it only recognized 4% of Apple phones and 75% of Androids. No one’s saying how much money was spent on it, but some clever devil of a reporter got into a database: The company that developed it had three contracts worth £4.8 million.

They repainting four or five planes for that amount of money.

In the meantime, scammers are busy telling people they’re tracing the virus. If you don’t want to get sick, they tell you, you should give them your bank details, call a premium rate number, and spend money on a free test kit. For extra safety, there’s some software you can download. Because this is a very sneaky virus and can infect your computer as well as your lungs.

Oriel College–the Oxford University college with the statue of colonialist Cecil Rhodes outside it–has voted to remove the statue. That doesn’t mean it comes down tomorrow. It’s set up an independent inquiry into the issue involved in taking it down. One of them is that some donors will stop supporting the college–something they’re aware of because some have been in touch to say they’d do just that. Now a tech entrepreneur, Husayn Kassai, has pledged to “make up for every penny any racist does pull.”

The internet is full of claims that wearing masks can kill you–they trap all your nasty exhaled carbon dioxide inside the mask, leaving you to re-breathe it.

Predictably enough, this is total bullshit. The carbon dioxide molecule is smaller than the droplets that masks keep it. They pass quite happily through the kind of masks people wear. And surgeons wear much heavier masks for longer periods and don’t have a track record of dropping down dead during surgery.

Another claim is that wearing a mask “literally activates your own virus.” The video that said that has been taken down.

Someone named Aubrey Huff tweeted that “it’s not healthy to breathe in your own CO2 all the time.”

I’m going to break the quote here so I can start it again: “I would rather die from coronavirus than to live the rest of my life in fear and wearing a damn mask,” Huff huffed.

Cheesy joke, but I had to do it.

The problem, of course, is that the mask isn’t to protect him. It’s to protect other people. So they’re the ones who he’s rolling the dice for.

61 thoughts on “The British news update, complete with a make-your-own Stonehenge”