Never heard of them? Neither has anyone else. That’s what’s so impressive. They tame the randomness that throws disorder into equations involving the way forest fires grow, the way a drop of water spreads on a tissue, or the way that cup of tea you’re stirring–

Would you stop that stirring? You’re upsetting an otherwise ordered univer–

Regularity structures may be the genuinely impressive element of his work, but if you want an impressive phrase to use when you’re pretending to explain this to someone who’ll understand it even less than you do and isn’t listening anyway, the phrase you want is stochastic analysis. Or better yet, stochastic partial differential equations. From those words on, everything you say will be nothing but a background hum to whatever’s going on inside your alleged listener’s own head.

If you want complicated math, though, you could try explaining why a bunch of mathematicians are giving out a 2021 prize in 2020. 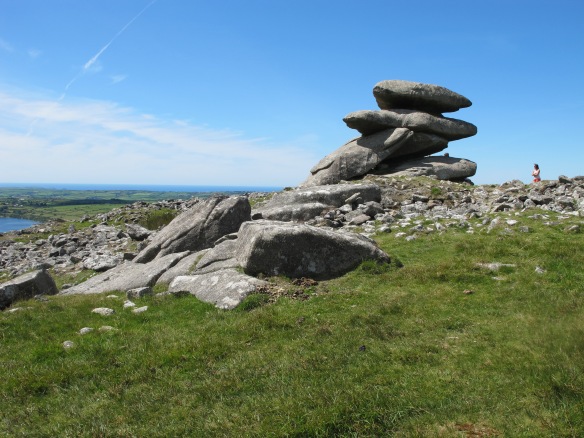 Irrelevant photo: Wind-carved rocks at the top of Rough Tor, which is pronounced Ruff Tor. No, don’t ask me.

If you’re British inflected instead of American inflected (yes, there’s an L in there: infLected), that’ll be maths, not math. I can only assume that the British are better with numbers than the Americans, since they wrestle with them in the plural  and we only have one to fight with.

The Breakthrough Prize is also awarded in the sciences, and Catherine Dulac won one for showing that the neural circuits that govern the behaviors involved in both male-specific and female-specific parenting are present in both sexes. I have no idea what the implications of that will turn out to be, but they should upset a few apple carts. I look forward to hearing more.

As long as we’re on the subject of medicine and male/female differences, Rebecca Shanksy, a neurologist from Boston University (no, it’s not in Britain, but never mind) is calling for stricter requirements for medical research to include both female and male animals.

For decades, researchers have used both male animals and male human subjects on the grounds that the fluctuations of female hormones would–forgive me if I use complicated scientific language here–fuck up their results.

They did that even when they were studying conditions that mostly affected women. Because you know what women are like. Hormonal. Unstable. Unpredictable. Lots of un- words.

It turns out, according to Shanksy, that male rodents–the go-to subject of many experiments–are less stable in terms of both hormones and behavior than females.

Shanksy is, by way of full disclosure, a female and therefore likely to be biased and unstable. Unlike males researchers, who are entirely objective and don’t have hormones.

The result of the male bias in research subjects is that drugs are likely not to work as well on women as on men. Ambien, which did its trials using both male mice and male humans, turned out to be metabolized  more slowly by women, and therefore (don’t ask me) more powerful in them.

Women tend to experience more side effects and overdoses for all drugs.

The U.S. and Canada now require female test subjects to be included (Britain doesn’t yet), but experiments are often done first on male subjects, with female subjects used later, treating the female subject as a deviation from the male standard. The article I read didn’t go into whether or how that biases the results, but I can see that if the first set of tests establish a standard, you could easily close off avenues that might be open if you worked differently.

Were we talking about sexism? The Musee d’Orsay in Paris–a museum with walls full of nudes–wouldn’t let a woman in because an official decided her dress was cut too low.

And if that wasn’t bad enough, they followed up their decision by telling her, “Calm down, madam.”

So she did what any good citizen of the twenty-first century would do: She went online and called them out on their double standards and sexism. The museum has apologized, both by tweet and by telephone, but it’s not the first time the museum’s had a problem with women’s real-life flesh as opposed to the artistic depiction of it. It called the cops on a performance artist who posed nude next to a nude painting. She was in jail for two days before a judge threw out a charge of public indecency.

An eighty-year-old hiker who’d been missing for three nights turned up not at his own funeral but at a press conference, held in a pub, where his family was about to appeal for help finding him.

Harry Harvey got separated from an organized walking group during a heavy hailstorm and spent three nights wild camping. He had camping gear with him but ran short on food. He described the area where he lost the group as desolate..

He eventually spotted a wildlife photographer, who called a rescue team and they brought him to the pub just in time for a dramatic reunion.

The quotes from his family make them sound a bit on the crabby side about it all.

A research trial that put robots into care homes has been defended on the grounds that the robots aren’t intended to replace humans, only to help fill times when, because the care system’s overstretched, staff don’t have time to spend with residents.

Which is commonly known as replacing humans with robots, only the humans were taken out before the robots were put in and no one had any intention of filling the gap they left–not even with robots.

The robots have wheels and a name, which they all share–Pepper. Also arms and hands. With a bit of programming, they could hold basic conversations with the residents, learn what they’re interested in, play them music, teach them languages, and remind them to take their medicine.

This could go wrong in so many ways. In Japan and Singapore robots are more widely accepted and have been hacked to intercept phone calls or let the hacker use the robot’s camera and microphone. I don’t find any mention of medication reminders going wrong, but I doubt many of us suffer from the delusion that technology is flawless.

The two-week trial found that residents’ loneliness levels decreased–not hugely, but a bit.

Britain’s home secretary, Priti Patel, called Extinction Rebellion “criminals who disrupt our free society and must be stopped.” Other cogs in the government chaos have talked about classifying it as an organized crime group, which takes a bit of mental mechanics, since XR is decentralized and I suspect you’d be hard put to find an overall organization.

The police, interestingly enough, see XR as nonviolent and committed to civil disobedience.

We’ll end with some more science awards, the Ig Nobels. This year’s include an one for determining that many entomologists–those are the folks who study insects–are afraid of spiders. Which aren’t insects, so it seems fair. Another went to a study that tried to spot narcissists by the shape of their eyebrows. A third went to a study that looked for a correlation between a nation’s income inequality and the prevalence of mouth-to-mouth kissing.

92 thoughts on “Math, medicine, and research: It’s the news from Britain–and elsewhere”