Eric Trump, who’s a son of a Donald (and has nothing to do with Britain–sorry) came out to the world on Fox and Friends. He said, “The LGBT+ community, they are incredible. You should see how they come out in full force for my father every single day. I’m part of that community, and we love the man, and thank you for protecting our neighborhoods and thank you for protecting our cities.”

In case you’re not clear on what the LGBT+ community is, the letters stand for gay, lesbian, bacon, and tomato, and he didn’t get the kind of welcoming reception that a new member might hope for. As a community, we don’t get to vote on our members any more than, say, redheads do, and I’ll let you in on one of our secrets: We may not all like each other and we may not all agree with each other, but if you want to make everybody in your nearest gay bar love you, announcing yourself as a son of a Trump isn’t your best bet.

The son-of-a-Donald’s welcome at Trump HQ–and I admit, I’m having to guess here, because they didn’t take to Twitter over it–was just about as warm, and in no time at all Eric had issued a clarification: He’s happily married. To his wife. Who’s a woman, in case that wasn’t clear. And no, he’s not bisexual. He’s also not lettuce, bacon, or tomato. He got mixed up. As people do so easily. In the heat of the moment, anyone could forget what sex they’re attracted to.

The GLBT+ community breathed a sigh of mayonnaise-flavored relief.

You can’t make this stuff up. I try, really I do, but it’s just not the same. 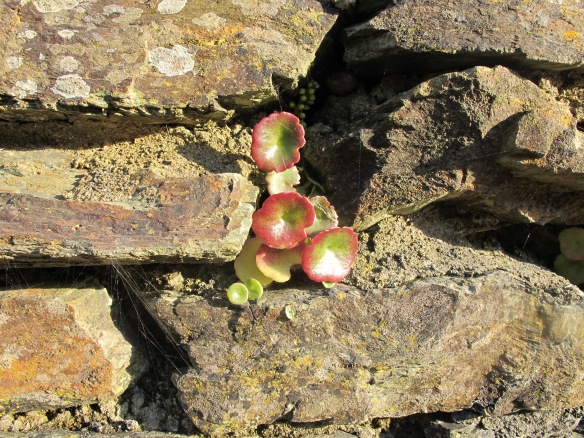 Irrelevant photo: wall pennywort. Although if you’re looking for a bit of relevance here, the gay liberation movement started at the Stonewall Inn, in Manhattan.

Now for the important stuff: Tattooed skin doesn’t sweat as much as untattooed skin. Heat tattooed and untattooed sections of your anatomy (assuming you have a tattooed part–or an untattooed one) and they’ll start to sweat at the same point, which suggests that the nerve signals are working in the same way, but the inked part kicks out less sweat.

Does it matter? I have no idea. It just seemed like something you might need to know.

Scientists have created a super-enzyme that degrades plastic six times faster than normal.

The enzyme’s derived from bacteria that evolved naturally, and it eats plastic. It could be used to recycle old plastic bottles into new plastic bottles, which can’t be done currently. Even with our current use patterns, that would mean we’d need less new plastic in the world.

PET currently takes hundreds of years to break down and causes all sorts of trouble along the way. (PET, by the way, is not your dog. It’s one kind of plastic, and like most of earth’s creatures, we end up breathing, eating, and drinking micro-bits of the stuff as it’s on its slow way toward degradation, and I know that sounds judgmental, but I don’t mean it that way. Plastic isn’t just in the oceans but in the soil, where it kills ants, mites, larvae, and all sorts of tiny things we don’t like to think about but that the food chain, awkwardly, depends on.)

Did I really leave all that in parentheses? I wonder why.

The new enzyme can break the stuff down in a few days and be happy in its work. The process is still too slow to be commercially viable, but the developers are hoping it’ll be in use within a couple of years.

They’ve also combined it with enzymes that break down cotton, which means it could be used to recycle mixed fabrics.

One of the odd byproducts of the pandemic is that people are using less cash and the Royal Mint (yes, there is a Royal Mint; it’s not something you eat; it creates coins) is going to stop making £2 coins for at least ten years and with 2p coins for some other length of time.

2p? That stands to two pence. It’s pronounced to pee, and it’s not a verb, it’s a noun. And no one thinks that’s funny, so stop smirking.

The mint has 26 times more £2 coins than it wants and 8 times more 2p coins. And it’s not allowed to give them away, although that could solve its problem.

In 2010, cash was used in six out of ten sales. By 2019, that had fallen to three out of ten. I don’t have post-pandemic statistics, but the demand for money from cash machines fell by 71% between early March to mid-April.

The Irish Supreme Court just ruled that the sandwich chain Subway’s bread isn’t bread–it has too much sugar.

This went to court (predictably enough) because someone with a Subway franchise wanted to be exempt from a tax on the grounds that bread is a staple food. No such luck. To be a staple, the sugar couldn’t be more than 2% of the weight of the flour. By that measure, Subway’s bread is 10% sugar.

Yeah, but what if we weigh all the ingredients in the sandwich, not just the flour, and throw in an old hiking boot? Then it’s less than 2% sugar.

Would you like bacon, lettuce, and mayonnaise on your donut?

The island of Niue is considering abandoning its current side of the international dateline and moving to the other one. The line runs just west of Niue, and that means the residents live their entire lives in a different day than New Zealand.

This matters because Nuieans are New Zealand citizens and a healthy chunk of the island’s population leaves Niue and moves there. So once your head stops spinning, this makes a kind of sense. The dateline is arbitrary anyway, and it’s not a straight line, so this won’t really bend it out of shape. Nuieans won’t even have to pack up their books and the dishes for the move.

If anyone figures out how to shorten 2020 even half as easily, please let me know. It hasn’t been a great year.

A zoo in Lincolnshire has adopted the tactics of many a frustrated teacher, separating not troublesome students but sweary parrots.

The Lincolnshire Wildlife Centre has some 200 gray parrots, and when five new ones joined the flock they generously shared an extensive knowledge of swear words.

“We are quite used to parrots swearing, but we’ve never had five at the same time,” the park’s CEO said. So the bad kids have been sent into exile–which is actually quite a serious thing, since parrots are highly social. Or at least they’ve been separated so they don’t encourage each other. I can only hope they’re allowed to mix with some of the more prudish parrots.

The CEO also said people find it amusing when parrots swear, leading the Chief Officer in Charge of Bad Language to say, “So I don’t know what his fucking problem is.”

58 thoughts on “Sweary parrots and who’s allowed to be gay, lesbian, bacon, & tomato: It’s the news from Britain”