As I write, Brexit talks are continuing. Competing headlines say that a deal is possible; that the European Union isn’t optimistic about reaching one; that a no-deal Brexit is likely, is very likely, is more than likely, is likelier than Santa Claus coming down Boris Johnson’s chimney; that even if Britain and the EU reach a deal there may not be time to approve it; and that the Scandinavian gods will descend from Mount Olympus (yes, the Greek gods did use to live there but they found it drafty and moved on. The Scandinavian gods, being from, you know, Scandinavia, think the weather’s great and following the example of the Czars use it as a winter palace.

That didn’t end well for the Czars, but you know what gods are like. They always know best. Won’t listen to anyone–

Where were we? That the Scandinavian gods will descend from Mount Olympus and whack a few heads, dictate a deal, and that’ll settle things. No one will be happy, but that’s the sign of a workable compromise.

The Scandinavian gods scenario is generally considered the least likely, but just in case I’m making a list of heads I think would be worth whacking. In case anyone asks.

I don’t want to give you multiple links for all the various scenarios, especially since the last one’s embarrassingly hard to document, so we’ll settle for this one.

We’ve had days of news stories about what’s going to happen to shipping and production and supply lines and prices. The government’s sunk lots of money into building black holes for trucks to wait in while their paperwork–and everyone else’s paperwork–gets sorted out. And ports are already backed up, for reasons I don’t really understand although as a rule bad political decisions are a fair bet. Empty containers are sitting where they full ones need to be. Ships are landing on the continent because they can’t land in Britain.

And this is all before Brexit hits.

As for us, we’ve stocked up on dog and cat food; on bread flour, sunflower seeds, and tea; on laundry soap; on a few other random items. We have no idea what’s about to happen or what we should have stocked up on instead. And really, we have only the vaguest idea what we need for life to be manageable. If we continue to have electricity and water, and I’m reasonably sure we will, we’ll eat something and we’ll wash.

No, I’m not really expecting a complete breakdown. It’s just that I feel like minor-league maniac stocking up this way. Making jokes seems to counterbalance that. 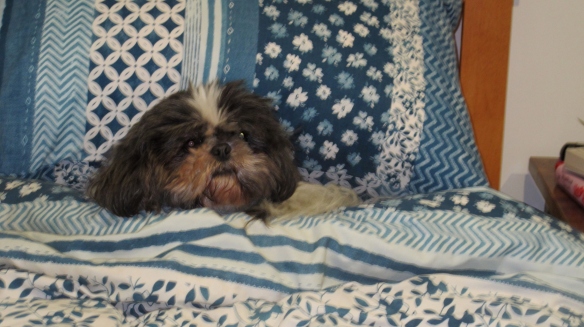 Sleep well, Minnie. The dog food stash has been topped up.

If anyone tells you they do know what’s about to happen, they’re (a) kidding you, (b) kidding themselves, (c) pretending to govern the country.

A couple of guys moved into an apartment on New York’s 22nd Street and discovered that it came with  a seasonal delivery of letters to Santa Claus. They seemed like an annoyance at first, but after a while one of the men, Jim Glaub, got into the spirit. He picked a letter writer that he could be Santa to and found other people who’d do the same with others.

The most moving ones were from kids whose parents were broke. One kid wanted a bed so he wouldn’t have to sleep on the couch. Another wanted a blanket “for my mom to sleep warm this winter and gloves for my dad to work.” Also shoes for her brother and some art supplies and glitter for herself.

I hope someone gave her lots of glitter.

At some point, mysteriously, what had been a few dozen letters became hundreds–more than an informal network could handle–and Glaub started a charity, along with a webpage to match kids to people able to give.

No one’s been able to explain why the letters come to that particular apartment. In the early stages, when they were still an annoyance, the men talked to the post office.

Yes, at Christmas inanimate objects can talk. Surprisingly coherently, even if not helpfully.

–well, it’s somewhere but they don’t know where. I guess you could say it’s missing, although no one expects to know where the nation’s cash is at any given moment, so missing isn’t quite the right word. Where it’s not, though, is in circulation.

This isn’t money that’s gone missing from the budget or that disappeared due to any sort of creative accounting. People are holding onto cash–a lot of it, as it happens. And this isn’t just happening in Britain. It’s happening in the U.S. and Europe as well.

What does it all mean? It’s hard to say, but speculation tends to involve criminal activity. The three currencies all have high denomination bills (or notes if you speak British) that make it easy to smuggle–or even just carry–large amounts of untraceable cash.

In case you need to know that at some point in your life, you heard it here first.

In deference to how bad 2020’s been already, the Literary Review canceled the contest it sponsors, the Bad Sex in Fiction awards. The judges felt “the public had been subjected to too many bad things this year to justify exposing it to bad sex as well.” But they warned the writing world not to take that as a “license to write bad sex.”

Not that the writing world needs a license.

I often argue with myself over which paper to link these snippets to. For this, though, the decision was simple: The Guardian’s article comes with a photo of the Reverend Richard Coles, in full reverent suit, reading at last year’s awards ceremony. Someone had fun picking that out of the archives.

40 thoughts on “Brexit, Santa, and bad sex: it’s the news from Britain”