Britain has approved two Covid vaccines and hope is raising its reckless head above the parapet. So what does the government do? It hustles us back to its comfort zone, which is chaos.

Vaccine dosage and the mathematics of gambling

A few days ago, someone in or near the government realized that if people need two doses of vaccine, that means the country needs (pay attention here, because this is complicated) two doses for every person who gets vaccinated. Not to mention enough people and places to vaccinate them twice. And we need to vaccinate almost everyone, which is, in technical terms, a shitload of people.

But, look! If we divide two by two, we get one.

So let’s give everyone a single dose and tell them to wait a while for the second. That way we’ll get the vaccine to more people.

This is very clever. 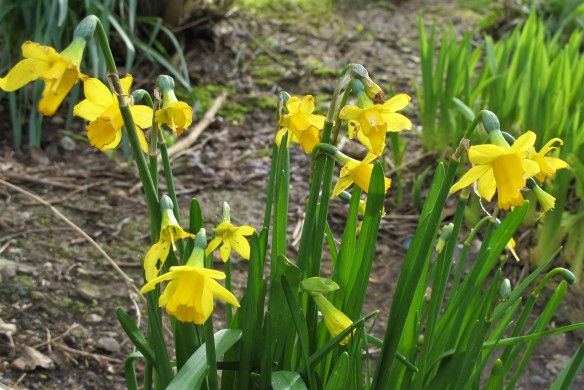 Irrelevant photo: Daffodils. I saw the first ones in bloom last week. Not these–these are from last year–but you get the basic idea.

Doctors made loud and unhappy sounds. People who already got one injection were given appointments for the second, they said. Who’s going to unschedule them? We (this is the doctors speaking, remember, in unison) and our staff are already at the breaking point and don’t have time to unschedule. What do you want us to do with these people when they show up?

And by the way, does anyone have access to a study indicating that postponing the second vaccination is safe?

Oh, that, the government said. We’ve done some modeling. Short term, it’ll be fine. This will save more lives than the original plan.

The government didn’t hear that noise about appointments. Appointments are Someone Else’s Problem, and as that great philosopher and scientist Douglas Adams pointed out, that means it falls into an SEP field, where becomes invisible.

So let’s stick with the question of studies showing that this is a good idea. Pfizer, the maker of one of the vaccines, said, “There are no data to demonstrate that protection after the first dose is sustained after 21 days.” And the US’s Dr. Fauci said something along the lines of, Do what you like over there, be we’re not crazy enough to try it here.

I’m not putting that in quotes because it’s not a quote. He was considerably more diplomatic.

And the public? By now, most of us will take any gamble that’s offered. Remember that business about hope’s reckless head? It’s a beautiful sight. We’re in love.

How much protection will a single shot give us for how long? Who the fuck knows? Some. For a while. That’s better than none for eternity.

They’re talking about delivering the second dose three months after the first, but I don’t recommend betting anything you’re attached to on it working out that way.

But why create chaos in one way when the world offers us so many possibilities?

As far as I can reconstruct this–and it’s not that far, so don’t put too much weight on the sequence of events here–Public Health England published some advice saying it was reasonable to give people one dose of one vaccine and one of another. If necessary.

Why would it be necessary? If, say, the first vaccine isn’t available when the second dose is due. (Whenever, that is, it does turn out to be due.) Or if the person doesn’t know which vaccine they got for a first does and their paperwork’s disappeared into an SEP field.

“This option is preferred if the individual is likely to be at immediate high risk or is considered unlikely to attend again,” Public Health England wrote.

The New York Times quoted virologist Prof John Moore, who said, “There are no data on this idea whatsoever,” and added that British officials “seem to have abandoned science completely now and are just trying to guess their way out of a mess.”

Which does sound familiar.

Public Health England shot back that they only meant that it would be okay in a crisis. They weren’t recommending it.

A study of mixed dosing is underway. It might even be better that way. Who the hell knows?

What, then, stands in the way of getting the vaccine to as many people as possible as quickly as possible? Among other things, a shortage of people capable of sticking needles into other people safely. So of course the government as made it as difficult as possible to recruit people.

A working dentist thought he’d pitch in, since he’s experienced at giving injections.

Explaining the documentation he was asked for, he said, “Some of the things are really quite sensible, like resuscitation, and recognising and managing anaphylaxis, but then you get things like preventing radicalisation, level 1 certificate required, [or] safeguarding children level 2.

“Children aren’t a priority for vaccination, [so] I really don’t think we’re going to be seeing children.

“I must admit, I gave up at the second hurdle, because I’m very busy as a dentist and I do get home quite tired at night. I thought ‘good grief, If I have to go through all this, I’m not [doing it].’ “

Would that they took this much care when they were handing out contracts for Covid testing and tracing.

Are schools open or closed?

Yes. But for a while there we weren’t sure which.

A few days before they were due to open, head teachers–if you’re American, that means principals–weren’t sure which they were preparing for. But as I type this on Sunday the prime minister has finally announced that primary schools will open. Except in London and southeastern England, where they’ll stay closed for two weeks  because of the new Covid variant, which is believed to be more infectious. Even though the variant sneaked out of London and the southeast before the holidays and enjoyed a lovely Christmas and New Year’s break in other parts of the country.

But why not wait till it gets a good hold elsewhere and react then?

Meanwhile, teachers unions are calling for primary schools to stay closed and head teachers have started legal action, hoping they’ll force the government to cough up the data behind its decision to reopen the schools. It’s a good idea, but the government’s beyond the reach of public embarrassment.

In the meantime, secondary schools are due to reopen on a staggered basis, which is easy since we’re all staggered by now. Universities will open late and their students–some of them–are on rent strike. And Covid testing of students will be carried out by extras from the Dr. Who New Year’s Day special.

Do we know how to throw a party over here or what?

In spite of rumors to the contrary, the new variant doesn’t seem to be hitting children any harder than the old one. A nurse told the BBC that children’s wards were filling up with Covid cases, and the story spread. Hospitals and pediatricians report that they’re not.

Breathe. We have enough trouble without borrowing any.