The winter solstice celebration came to Cornwall early this year. No, the earth’s tilt hasn’t changed and the days hadn’t stopped growing shorter, but a group of people around here gather to sing up the sun on the summer and winter solstices and—well, the pub couldn’t handle that many breakfasts on the actual solstice, so having weighed the sun’s schedule against the pub’s schedule, the group met a day early. Or was that two days early? I’m the last person to trust on this kind of information, but what matters most in life, breakfast or accuracy? 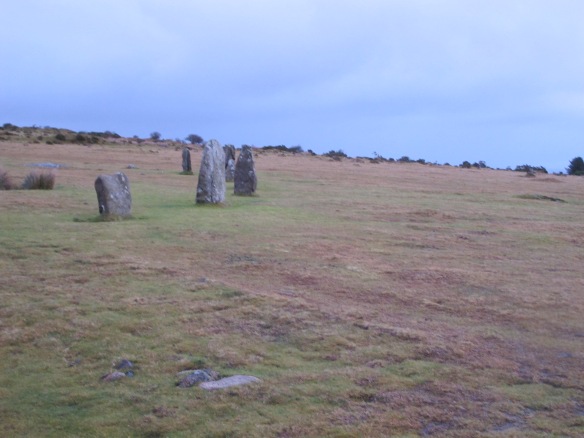 I’m not sure if I should say “they” or “we” as I write about this. I’ve joined the group twice now, but by definition it involves getting out of bed in the dark, so I’m a fringe member—always on the verge of rolling over and mumbling, “Next year.” So let’s go with “they.”

The place they meet is on the moor, where three ancient stone circles were built one right next to the other. Last year, a group of archeologists and volunteers uncovered an ancient pathway between two of the circles, then documented it and covered it back up, since that’s the best way to preserve it.

Not only is the place packed with ancient monuments and atmosphere, it’s also windy. The moors are like that. If there’s any wind at all, you’ll take a pounding. So it was cold and we didn’t stay out long, but we stood in the midst of the stone circles and sang, and the harmonies were beautiful. And in response, the sun did what it always does, which is to come up when it’s damn well ready. On this particular almost-solstice morning I’m sure it did come up but we couldn’t really tell. It was cloudy and anticlimactic and we walked to the pub and ate breakfast, but the harmonies really were beautiful and I’ll probably drag myself out of bed at silly o’clock when the summer solstice comes around.

5 thoughts on “Singing up the sun: A late report on an early solstice”