Not long ago, someone asked if I could return a handful of leaflets to someone in Truro. Or to someone else in St. Austell. The problem was that I live about an hour from Truro and, oh, 40 minutes or more from St. Austell. I didn’t want to make either drive just to hand over some leaflets, then turn around and drive home.

An aside here: P. told me long ago that time’s an American way of measuring distance, but I swear it’s the only way that makes sense here. Speed depends on the road, and Cornwall’s full of back roads, so distance is only going to tell you just so much.

The solution was to employ the Cornish relay delivery system. Wild Thing and I were meeting with someone relatively nearby (around here, nothing’s truly close) the next morning, and he was meeting with someone else in the afternoon—in Truro. So I gave him the leaflets and asked him to pass them on to the next person, who I’d emailed and who had agreed to either drop them off where they needed to be or let someone pick them up. 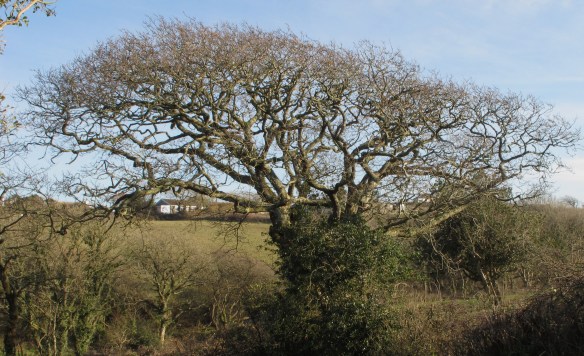 Irrelevant photo: Spot the direction of the prevailing wind.

The same system delivered a leg of lamb to our house a few years ago. Wild Thing—the household meat eater—had bought a leg of lamb from A., who raises lamb, but when she went to pick it up, it had already left. J. had stopped by and was on her way to see a neighbor of ours (let’s call the neighbor J.2 for the sake of either clarity or confusion, take your pick). As far as A. was concerned, it had been delivered. Only we didn’t have the meat.

We went home and Wild Thing called J., who’d stopped by our house, she said, but we were out, so she left it with J.2, who stuck it in her refrigerator.

Are you still with me?

Wild Thing went to J.2’s house, collected her leg of lamb, and stuck the meat in the oven.

We thought it was all very villagey and—here we go again—quaint until we used the same system ourselves. Then we thought it made perfect sense.