I’m going to interrupt my exploration of the spidery corners of British culture—you know, the stuff I claim to be doing in the heading of my blog—to explore a spidery corner belonging of the blogosphere.

The other day, I got an email from someone who said nice things about my blog. I fell in love immediately. Who wouldn’t? She has such good taste. She wanted me to write a post that the company she works for would then promote through social media. Since I’m crap with social media and I assume they’re not (although how I think I know that is anyone’s guess), this is a tempting offer. 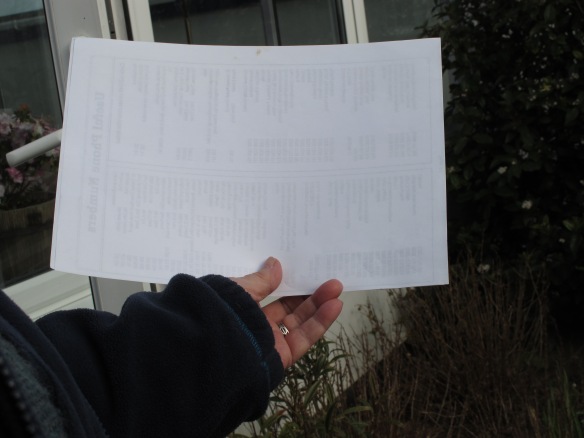 Irrelevant photo: Here’s Wild Thing and me, failing to see the solar eclipse on a piece of used paper. You can just see the type on the other side. Out of camera range was a piece of cardboard with a hole in it, through which the image of the sun declined to make itself seen. The sky was hazy, and I’m guessing that was the problem. Either that or the image of the sun was holding out for non-recycled paper.

What does she want me to write about? My ideal night out in a foreign city and how to connect with a culture using language and food.

Well, I like language. I like food. In my barbarian way, I like culture(s). I even like cities, and Britain has almost as many cities as it does bizarre festivals. (I made that up. It can’t possibly.) So maybe this fits. Admittedly, my ideal night out is a whole lot less raucous than most people want to read about, but what really bothers me is this feeling that I’d be selling out if I bent the blog off course (if it is off course, which I haven’t established yet) just so I could wolf down the first commercial carrot anyone has bothered to dangle in front of me.

And hell, the carrot isn’t even money. I’m mean, if you’re going to sell out, shouldn’t you get paid?

That tells you I come from a print background. I mean, in blogworld we’re supposed to be thrilled if our words are discovered and circulated, but we’re not supposed to think about money. Even when the circulator hopes to make money out of the exchange.

Does anyone notice something slightly wrong about this?

In the name of transparency, I should say that I haven’t a clue whether I’m supposed to be writing about her request or whether the post—if I ever write, let alone post, it—is supposed to appear completely natural and unsolicited. Also in the name of transparency, I’ll add that I’m not sure how I feel writing about our email exchange. I don’t know if I’m talking behind her back, and if I am whether it’s okay since it’s not gossip, just discussion. Hell, I don’t even know if her back’s turned. Maybe she’s reading this. If so, I hope I’m not creating any hard feelings. She presented me with an interesting problem, and I want to explore it. And she was drawn to my blog, she said, by its creativity, which I take to mean its unpredictability. So here’s me, folks, being unpredictable.

If anyone has opinions or past experiences with this kind of thing, I’d love to hear them. Let’s explore.

43 thoughts on “Commercial carrots in blogworld”