Some days you find an adventure around every blind curve in the narrow road. At least if you’re 144, as Wild Thing and I cumulatively are (I think; don’t trust me with numbers), it’s enough to pass for adventure.

We drove to a garden center on Sunday to buy a dwarf hydrangea. Doesn’t that sound like the kind of thing you do when you’re cumulatively 144 years old? 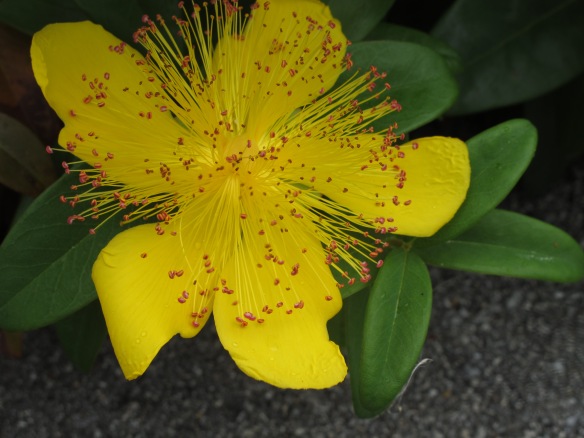 We weren’t yet at the main road when we saw a ewe and two lambs on the road. I slowed to a crawl and thought I’d edge past them, but they weren’t having it. The ewe led her lambs straight ahead, so that I was either driving them back toward their field or further from it, only I had no idea which.  Either way, I was adding stress to their day.

City kids that we are, we’ve lived in the country long enough to know we needed to stop at the nearest permanently occupied house (this is second-home country, and vacation-rental country, so not just any house would do). But we weren’t near the nearest house—we were near fields, none of which had sheep in them.

Wild Thing got out of the car, thinking she could edge them to the side of the road, but they treated her the same way they treated the car: They kept going down the road.

Eventually we—me in the car and Wild Thing on foot—came to a field gate and they plastered themselves against it. I drove past and got out of the car while we talked about what to do. It was tempting to open the gate and let them in, but it was a recently mown, sheepless field. Wherever they came from, this wasn’t it. (If it had had sheep, we’d have had no way of knowing if it was the right flock, but never mind, it didn’t.)

We drove on and stopped at the next house, which turned out to belong to people we know slightly. They narrowed the possibilities down to two farmers and promised to call them both. In the meantime, a litter of six springer spaniel puppies swarmed us in that charming, brainless way that puppies have and they—that’s the people, not the dogs—said they had two left, did we want any?

We drove on and about a mile on the other side of the main road picked up two hitchhikers carrying skateboards. They were, at a wild guess, somewhere in their late teens and facing a long, long walk if they didn’t get a ride.

Wild Thing’s part of a group of people trying to create a skateboard park in the village. The group was kicked off by a couple of fathers whose kids—well, one of them is just walking and the other hasn’t gotten that far. So you can think of this as a long-term project. The village is a great place for young kids but not so great for older ones, and a skate board park wouldn’t solve the problem but it would help a bit. And it might keep the kids from skating on a stretch of road between two blind curves, where sooner or later somebody’s going to get smooshed.

So Wild Thing talked with them about skateboard parks and they loved the idea that someone wanted to build one. The three of them happily traded information for a few miles. They talked about how adults tend to treat skaters like a threat to the fabric of society—I’m paraphrasing here; I can’t remember their exact words—and I talked about how generation after generation adults are convinced that whatever kids are into is a threat to the fabric of society. The only thing that changes is the activity. When Wild Thing and I were kids it was hanging out on the street corner.

We dropped them in Launceston and left feeling like—you got it—part of a community. Then we bought a blue dwarf hydrangea and some pansies. I’d told Wild Thing just the day before that I wasn’t going to grow pansies anymore because the slugs and snails love them (yumm, salad) but they were so cheery that I bought them anyway. And I’ve been out slaughtering slugs and snails pretty consistently in recent weeks, so I might be able to get away with it.

From there, we drove home and walked to a village tea that was raising money for the Air Ambulance. We shared a table with two women from a nearby town and Wild Thing got a conversation going, which isn’t always easy but she has a gift. As they were leaving, Wild Thing said we’d stop by on Monday to help them eat the cake they were buying. They said we’d be most welcome. It was gracious thing to say, and since we don’t know their address(es), a safe one.

Then some people from the village joined us and J. wanted the recipe for a chocolate cake I brought to a party last week. Actually, she’d asked the day before and I hadn’t gotten around to sending it, but she explained that she needed it that day because she wanted to make it on Monday.

The recipe’s based on one in The Joy of Cooking, and I’m in love with it at the moment. British pie crusts are richer than the ones we make in the U.S., but their cakes tend to be drier. And I’m on a mission to mess with British baking anyway. Not because I don’t like it–some of it’s wonderful, and I’ve learned how to make a mean ginger cake. But what culture’s national cuisine couldn’t be improved by peach cobbler and New York cheesecake?

Anyway, being asked for the recipe left me with that same feeling of being part of a community, and we waddled home, happy and full of cake and scones.

84 thoughts on “Community life in a Cornish village”