No one’s complained yet, but it’s been weighing on my conscience that I make fun of British politics more often and more joyfully than I make fun of American politics. I have several excuses, all of them true but none of them good enough:

But T. sent me an email a while ago that allows me to even the balance a little. According to Reuters News, the Pentagon has been—and here I’m going to abandon the balanced language of Reuters for a minute—throwing money in the air without bothering to count it. 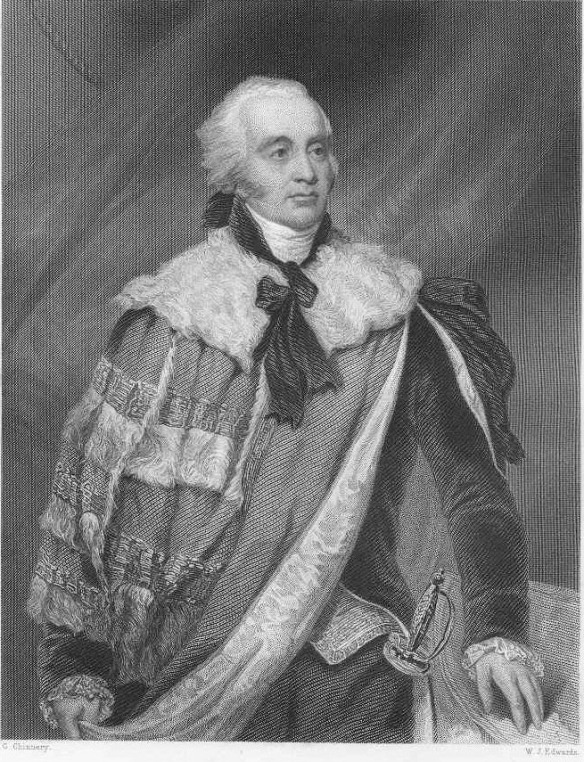 Speaking of absurdity: From the pose, this could be Washington crossing the Delaware and threatening to tip over the rowboat, but it’s a picture of someone in a House of Lords robe. I’m not sure what period it’s from. The hairstyles and the poses have changed but the robes? Not much. From Wikimedia.

How much money are we talking about? Oh, $8.5 trillion or so. Not enough to worry about. And that goes back to 1996, so, you know, per year and all it’s not that much. Just a few hundred billion or something. You can’t trust me with numbers, especially when we’re dealing in amounts I can’t even imagine, never mind count. Let’s just say a number with a whole bunch of zeros following it. Per year. I do understand years.

Apparently, the problem is that the Pentagon uses “a tangle” of accounting programs that can’t talk to each other. “ ‘It’s like if every electrical socket in the Pentagon had a different shape and voltage,’ says a former defense official who until recently led efforts to modernize defense accounting.” (The quotes here are from a series of three Reuters articles. I won’t include separate links. Follow the link above and you’ll find them all.)

Record keeping, as Reuters puts it, is “rife with made-up numbers to cover lost or missing information.”

That leaves the military storing physical object that are out of date and buying new ones it doesn’t need because it has no idea what it needs. It has “a backlog of more than half a trillion dollars in unaudited contracts with outside vendors; how much of that money paid for actual goods and services delivered isn’t known.”

When it comes to veterans and serving personnel, in some cases they aren’t being paid what they’re owed. In others, they’re overpaid and then the overpayment is clawed back all at once. Or an amount they haven’t been overpaid is clawed back because some computer system somewhere thinks it was overpaid, so poof, the income a vet had every reason to rely on stops coming. In a case Reuters followed (a mistaken claw-back), no explanation was offered until Reuters got involved, at which point—surely this wasn’t connected—the mistake was corrected.

In fairness, the Pentagon has tried to fix the problems but ended up making them worse.

“In 2000, the Navy began work on four separate projects to handle finances, supplies, maintenance of equipment and contracting. Instead, the systems took on overlapping duties that each performed in different ways, using different formats for the same data. Five years later, the GAO said, ‘These efforts were failures. . . . $1 billion was largely wasted.’ ”

The Pentagon is the only federal agency that’s never been audited. So how much of that $8.5 trillion has been paid out legitimately, how much wasted, and how much stolen? We don’t know. And more to the point, they don’t know either.

But it’s only money, as my father used to say whenever an inappropriate situation came his way. You can’t buy happiness with it.

You can, however, buy a lot of other stuff. And no doubt someone has. We just don’t know who or what.

So there we go. Absurdity in American politics. But you’ll have to admit, it needs a few swords and a wig to make it funny.