Let’s talk about search engine terms. No, I’m not going to hand out blogging advice. You won’t find any advice here that you’d want to follow, on blogging or any other subject. What I want to explore is that strange and lovely world of search engines and algorithms and other things I don’t understand, about which I want to ask the following profound question: What the hell are they thinking?

I know, thinking’s the wrong word. Algorithms don’t think. Someone does, though. A human mind, with an actual human being attached to it, programs these suckers and sets them loose on the world trusting that they’ll connect the right question to the right answer.

Or not caring if they do. 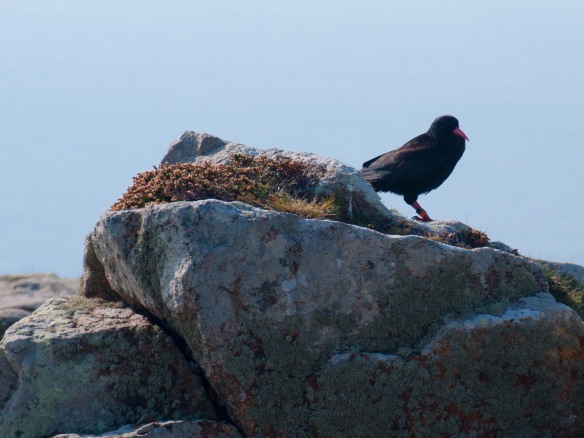 A chough, pronounced “chuff,” Cornwall’s official bird. It was driven to extinction in Cornwall, but a few years ago a pair flew over from Ireland and bred successfully and a handful can now be found. Those who know are keeping their locations secret. I know, at least vaguely, and I’m not telling. Photo by Ida Swearingen, and she isn’t telling either.

And then there are the people who type some of these terms into Google. Spare a moment to wonder what they’re thinking as well.

So here’s how people found Notes from the U.K. (I’ll do a separate post on vaguely relevant search terms. Sooner or later.) They typed in (with Google’s lower case format carefully preserved):

who are the bigwigs in legal highs: . Okay, I’m pretty clear on what this poor kid was looking for and can make an educated guess or three about what they planned to do with the information. And they were so disappointed to end up in the middle of a discussion of lawyers’ wigs. Sorry, kid. Now get off the internet and go finish your homework. And remember to use the letter u.

kittens dash into rooms they shouldn’t: Rooms and dash are clear enough to work with, but we need a definition of shouldn’t. They shouldn’t because they’ll get scolded? Because they’ll get eaten by the Minotaur? Or the Merrimac? Anyway, we need to define the term. And we need video, which I don’t do. And come to think of it, how young a kitten do they want to see? So I was a disappointment here. I do have a page of kitten pictures, which I haven’t updated lately now that I think about it, but I can’t imagine I’m high up the Google list. How many web sites and blogs did the googler go to before being disappointed by mine? What is it about kittens and the internet that someone went through that many links looking for this?

dog poo for rubbish collection Cornwall: For this, they need to contact the county. Unless they’re looking for dog poo itself. If they can convince me it’s a good idea to donate it, we have plenty. And a nice collection of the cat variety as well. But, well, I will need convincing.

Sumerdress: These are what they wore in Sumeria? Sorry, this isn’t a fashion blog.

kitten club: I can make a fair guess about which regular readers would  join, but I don’t know where to refer them. And a kitten a month? It’s too many. No matter how cute they are. Plus it’s wrong to ship them. They need to be hand delivered, lovingly.

notes of the kettle: This was weird enough that I googled it myself and was, sure enough, led to one of my posts, “Putting the kettle on,” as well as to notes from a community meeting that included the subhead “Vott is kettle,” which is all about JavaScript. Why is said “vott” instead of “what” is a mystery. Or maybe “vott” isn’t a mispronunciation of what but some arcane bit of geek speak. You know: “I’m going to vott your computer now. Stand back.” I’d love to give you a link to this so you don’t think I made it up, but I didn’t copy it down at the time—I was too busy being baffled—and it won’t come up again, but if you want to buy a whistling kettle, several of those links popped up. I think it was when I typed in “vott is kettle.” The connection’s obvious, isn’t it? The kettle whistles and you run into the kitchen yelling, “Vott iz itt dis time?” (Sorry, my phony accent’s a bit woozy. I’m not sure what language group I’m supposed to be imitating and I doubt I’d get it right if I was sure. Normally I wouldn’t stoop to making fun of someone’s accent, but it’s justified this time. Necessary even.) You can find out about Kettle Knudson, who’s either from or visited Bemidji, Minnesota, I’m not sure which, but the story’s in the Bemidji Pioneer. On this I could give you some links but not having them introduces an element of randomness that’s way more fun. What does it all mean, bartender?

tumblr pics of fully clothed grandmothers: I hardly know where to start with this one. Is a website somewhere offering pics of semi-naked grandmothers? And if there is, how do we know the pictures are of genuine grandmothers and not women like me, of a grandmotherly age but without grandchildren, which by any definition I understand disqualifies me from grandmotherhood? I mean, how much less of a turn-on is it once you know the background’s been faked?  You won’t find me on any site of that sort. Not only won’t I lower myself to pretend I have grandchildren but because my clothes are tattooed on, so I’m always fully clothed. Even in the shower. So, how did they find Notes with that in the search engine? The only one of these words I remember using is of, although it’s not impossible that I said everyone somewhere or other was fully clothed. It sounds like me. And in many of the places I go, including the supermarket, they are. Time after time. In fact, even as I type this, I’m fully clothed. It’s chilly in the morning at this time of year. I only frighten the neighbors in warm weather. As for what the googler was looking for, I can only speculate. And I’m not sure I want to.

71 thoughts on “How people find a blog”