M. has my oven wired. When I bake, an alarm goes off in her house and she appears, as if by magic, at our door.

“Want a cup of tea?” either Wild Thing or I ask.

“Is the pope Catholic?”

She used to answer, “Is the pope a Nazi?” but that was before Francis. She was raised Catholic, so she gets to say stuff like that. I wasn’t raised Catholic so I don’t, but I will claim the right to quote her. 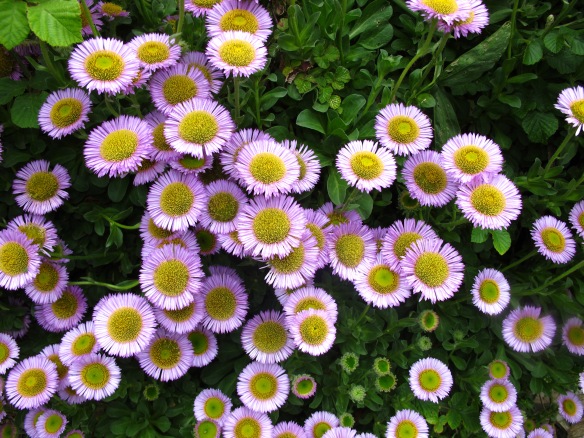 Irrelevant photo: flowers. As if you couldn’t have figured that out.

I make a pot of tea and set out whatever I just finished baking. If I’m still getting it out of the pan, she asks, “Shall I put the kettle on?” Because you don’t want to stand between M. and a cup of tea, not even if you’re producing baked goods.

She never says, “You want me to I make the tea?” That’s what I’d say. With her, it’s all about the kettle. And while we’re at it, I don’t think I’ve ever said “shall I,” although M. says it as if it were a normal part of speech. And she doesn’t have what people here call a posh accent. She just, you know, uses it like language—ordinary, everyday language.

It’s this kind of thing that makes me doubt I’ll never write British (as opposed to American) dialogue. Oh, I can put together a line or two—enough to keep the blog fed—but if I wanted to write a full scene, never mind a full novel, in it? In no time at all I’d have one of my characters saying, “Want me to make the tea?” instead of, “Shall I put the kettle on?” Only it would be the equivalent on some subject where I haven’t noticed—or maybe even heard—the difference.

I know someone whose mind catalogs these small differences. Talking to her is like reaching into a grab bag: You (or more accurately, she) could pull out almost any sort of accent, along with any region’s phrasebook. It all lives in her head, organized into separate drawers (I know, I know, I’ve jumped metaphors; go ahead and shoot me), each neatly labeled, and none of it escapes to mix itself with her own accent—the accent she uses when she’s being herself. It’s an amazing, fascinating gift.

Me, though? I assimilate languages by steeping myself in them, and once I do I’ve taken on the new flavor. In other words, if I pick up a new accent or phrasebook in English, I’ll lose my clarity on the last one—the one I think is my own. Or more than that—is me. If I weren’t a writer, I wouldn’t have any problem with that. As a writer, though, I’m terrified that I’ll make such a cut-and-paste mess out of my accent that I won’t be able to write in any region’s English.

67 thoughts on “Putting the Kettle On”