Let’s take a break from the way the world (or at least the U.S. as I once knew it) is imploding and ask what people really want to know about Britain. Because I don’t know about you, but I need a break from reality.

If you haven’t been reading Notes for long, here’s how I figure out what the world wants to know: I read the questions that lead people here. It’s highly unscientific, since people who want to know about Roman walls wouldn’t have, until today, found anything to lead them here, but what the hell, it’s the method I have to hand.

A rare relevant photo: A bit of Roman wall, now fencing off someone’s backyard in Exeter.

As always, people wanted to know about judges’ wigs, and occasionally about lawyers’ wigs. Someone wanted to know why barristers wear wigs, and I live to inform the curious multitudes. It’s because they want to. In spite of all the studying they had to do to become barristers, they watched too much TV and it left them with the impression that they’d look important if they ran around with white, sideways Shirley Temple curls on their heads.

No, I can’t explain it either. 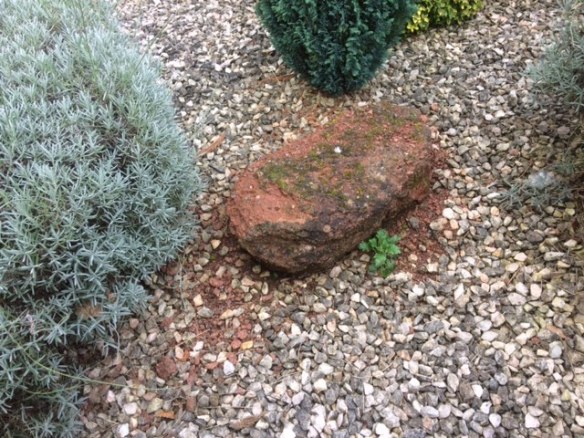 Bonus relevant photo: A single stone from the Roman wall, carefully placed in the same yard, which I’d call a garden if I weren’t, at heart, American. Our best guess is that that the wall was hit when Exeter was bombed during World War II.

A related comment (it wasn’t really a question) read, (and as usual, these come with no capital letters or question marks), “the wig which judges wear in uk courts is a with answers.”

Got that? If the writer’s correct, all those judges share a single wig. This has to be awkward, since although Britain looks small if you’re sitting in a big country like the U.S., it actually takes quite a bit of time to drive a single wig from courthouse to courthouse, stopping at every last one from Land’s End to John O’Groats and from Fishguard to the white cliffs of Dover. No wonder the courts are building up a backlog. It’s not budget cuts, it’s because that damned wig got caught in traffic.

Why do the judges have to wait for the wig to arrive? Because they’ve also been watching too much TV, but also because, as the writer says, “is a with answers.” The wig has the answers. Want to know the correct precedent for the case in front of you (and this is especially important in a country with an unwritten constitution that consists of a random number of historical documents and every damn precedent ever precedented)? The wig knows what it is.

And then it moves on.

Americans, as always, want to know what the British think of them, and especially if they hate them or like them. What is it with my fellow countrypeople? Is crossing the border into a foreign country so terrifying that we have to slip a message in a bottle before we take the risk, asking, “Is anyone out there? Do you hate me?”

Right now, a lot of the people I run into are asking what’s wrong with us (the us here being Americans), and I don’t have a good answer. If you’re American and visit Britain, please don’t take that as personal hostility. It’s political. And it’s a not a bad question.

Within a few days, over a million Britons signed a petition asking to ban Trump from making a state visit to the U.K. But relax, friends, no one’s doing anything extreme like proposing a ban on anyone with an American passport if they were born into one religion or another.

Several questions this time around asked about the phrase tickety boo. One person just typed in the phrase. Another wanted to know who says it. J. does from time to time. So do other people. Does that help?

Probably not. Here’s where I tell you everything I know about it. And more.

Someone wanted to know, “how to drive straight in a narrow.” Um,  you do that by not turning the wheel. Someone else typed in, “uk narrow streets dangerous for driving.” Oh, I dunno. If you’re careful not to hit anyone, they’re okay. They may be more work than a wide street, but I’m not sure they’re any more dangerous.

A third person asked, “Why are englands roads so narrow.” Because, my friend, a whole shitload of them were built before the first car was ade. They were the widths people needed (or could afford) back then. And—you know how this works—folks built their houses alongside them. And then cars were invented and traffic got out of control and even though people tried shoving the houses back a few feet it didn’t work, so they left them where they were and there they sit to this day. And when one or two of them fall apart or get torn down, they’re replaced by newer buildings but since the neighboring buildings are usually still standing, the road stays narrow.

And that’s how the crocodile got its tale.

Aren’t you glad I’m here to sort this shit out?

The usual wheelbarrowload of people wanted to know why Britain is called Great Britain, or simply why it’s called great. It’s not a moral judgment, it means big. Someone did ask, though, why it was called Britain, which is an interesting twist on the question and if life ever settles down a bit I’ll see what sort of answers I can dig out.

Almost as many people asked about brussels sprouts (usually in the form of why they’re eaten at Christmas) as asked about why Britain was called great. Now that tells you what’s important in the culture.

Someone wanted to know about “Russian hotel aftermath/torch [explicit].” That was before the allegations about Trump and golden showers in a Russian hotel, although maybe somebody knew something even then. Do the allegations mention a torch? I don’t remember any mention of that.

I also didn’t write about that. The search probably landed here because of a post about a hotel fire in Exeter. Which is not in Russia, it’s in Devon. And no one seems to be saying the place was torched.

As far as explicit goes, the post was pretty mild. Sorry if I’ve disappointed you. I lack imagination.

A few questions came from the clued-up. A few people wanted to read about emmits. It’s not something you ask about if you don’t already know a bit. Someone else wanted to know about “tutting in a queue.” Again, you have to know a bit about the British religion, which is standing in line—otherwise known as queuing—and British disapproval, which often takes the form of tutting, before you can ask the question. I’d give you a link to whatever I wrote about all that but I have no idea where it is. Google “tutting in a queue” and “Notes from the U.K.” and you may or may not find it.

Someone else asked, “why do mps walk five steps and bow.” Wow. Good question. Do they? Always? No wonder it’s so hard to accomplish anything sensible. The MPs (that’s Members of Parliament to the uninitiated) are all running around the Westminster chess board like knights with a twitch, one step forward and two to the side, then they bow. With two hops in the middle so it adds up to five.

Can I go watch?

Someone wanted to know about cockwombles. It was one of my more profound posts, if I do say so myself.

And finally, someone wrote, “notes i have my own rules to.” Uh huh. I have a few of my own rules, and lots of notes. I can even decipher some of then. Others are as much of a mystery as that comment is. I’ll leave it for you to figure out.

Stay sane, people. The world’s getting crazy. And speak up, because this is when it matters. It really, really matters.

88 thoughts on “What people really want to know about Britain, part something”