You want the American stereotype of British English? The phrase tickety boo comes as close as anything I can think of. It sounds like something that escaped from a 1920s comedy involving a butler who wears a bowler hat to hide his brains and a dim-witted aristocrat who needs a top hat to accommodate his sense of entitlement. Oh, and there’d be a lot of alcohol—martinis, probably—and women (strictly secondary characters) in what were then scandalously short skirts and are now scandalously modest.

Strangely, though, tickety boo is something people still say. Right now, in—what year is this anyway? Twenty something or other. And not clueless aristocrats either. Ordinary hatless, butlerless people who I know.

Or whom I know if you insist. 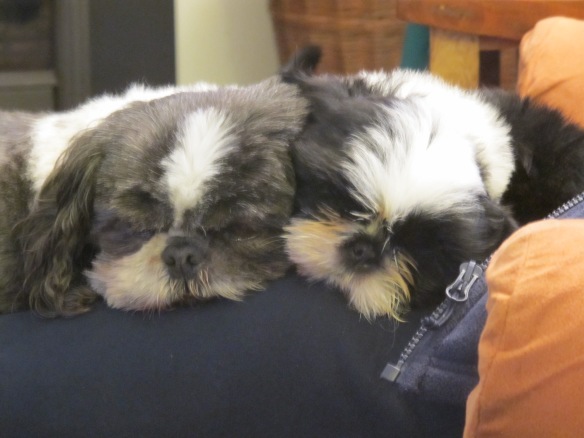 Oh, and did I mention that we got a puppy? He’s the one of the right: nine weeks old and named (what else?) Moose.

So shut up, Ellen, and tell the good people what tickety boo means. It means is okay. or everything’s fine. It has an every little thing’s in place sound to it, although none of the definitions I found in my extensive five-minute Google search mention this. Still, my ear insists on it, and puts the emphasis on little.

It’s informal, as you might have guessed from the sound.

The Urban Dictionary says the origin may be Scottish, but along with the Oxford Dictionary it traces the origins, tentatively to Hindi, although the two dictionaries quote different versions of a Hindi phrase—or (let’s be skeptical) an allegedly Hindi phrase. If I had to bet on one version, I’d put my money on the Oxford one, but let’s not pretend I know anything about this. Oxford sounds impressive and its phrase sounds less like something an ear tuned exclusively to English might have mangled .

How a phrase originates in Scotland and India I don’t know, but to demonstrate the phrase’s Scottish roots, the Urban Dictionary refers to Danny Kaye singing “Everything is Tickety Boo” in a film I never heard of, Merry Andrew. Convincing stuff, right? Kaye was an American actor—the New York-born son of Ukrainian-Jewish immigrants whose original name was Kaminsky, which I’m reasonably sure isn’t Scottish or Hindi.

Andrew is the patron saint of Scotland, so maybe we can make some sort of backing for the theory there.

Do you begin to get the sense that everything isn’t quite tickety boo about all this? That maybe some of the sources you find through Google aren’t perfectly researched? Maybe even that guesswork is involved in tracing word origins?

The Collins Dictionary, playing it safe, says the origin is obscure. Several sources say the phrase is outdated, even archaic. Which would imply that my friends are archaic. Sorry, but we’re not having any of that.

The Oxford Dictionary adds, helpfully, that tickety boo rhymes with buckaroo, poo-poo, shih tzu, Waterloo, and many, many other words that wouldn’t spring to mind if you were going for logical connection instead of pure sound. If anyone would like to use those in a rhymed, metered poem and submit it to the Comments section, I will shoot myself. Although not necessarily with a gun.

In Tuesday’s post I left some of you with unanswered questions—which bless your tickety little hearts, you asked—about why I’m cutting back my posting schedule. I didn’t mean to be cryptic or to worry anyone. Here’s what’s happening:

Ever since Wild Thing was diagnosed with macular degeneration and had to quit driving, I’ve been thinking about posting less often. Not necessarily forever, but for now. The changes in our lives haven’t been easy to get used to, either emotionally or practically, and one result is that I haven’t been keeping up with the details of my life lately.

While I was arguing with myself over whether or not to cut back, I got a bad cold, which came close on the heels of a miserable flu, and on Monday night I realized I had nothing at all to say for Tuesday’s post. The only thought in my head was, Do we have enough cold pills? So that tipped me over the edge. If I’d a bit more room in my head for thoughts, I might have said all this in Tuesday’s post but I didn’t and so I couldn’t.

I’m pulling back from some other commitments as well and hoping all this will leave me time to moult—you know, drop old feathers, grow new ones, maybe some listen to music more often, do more baking, spend more time with Wild Thing, and do more work on the book I’m theoretically writing. Maybe even shovel out the house a bit more often.

But you’re not rid of me yet. I’ll be around on Fridays. And already I’m missing my old schedule.

61 thoughts on “It’s all tickety boo”