As a rule, I write about Britain, but nothing’s more British than thinking the weather’s better someplace else, so let’s take a quick and random tour of the world, by way of the stranger bits of news I’ve found lately. 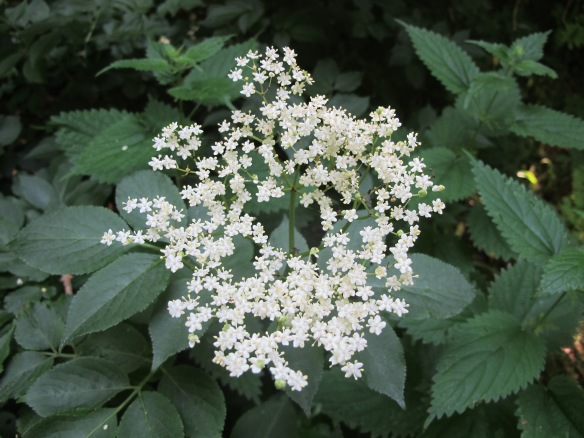 Irrelevant photo: elderflower–with a nettle snuggling up to it on the right.

Germany: An exhibition to mark the 500th anniversary of Martin Luther tacking his 95 theses on a church door, and in the process kicking off the Reformation, includes a robot named BlessU-2, which can bless you in one of five languages (or eight according to a different source) and beams light from its hands. It can also recite a bible verse–maybe the same one over and over and maybe one per customer; I’m not sure.

The five languages are German, English, French, Spanish, and Polish. If you’d like to be blessed in any other language (or in any other religion, while we’re at it), you’re shit outta luck (unless there really are eight), but you can choose either a male or a female voice, which might ease your pain.

Just for the record, Luther’s theses were in Latin. Latin doesn’t seem to be one of the languages you can choose. There’s not a lot of call for it these days.

The Protestant Church in Hesse and Nassau “is behind the initiative,” whatever that means, and hopes the robot will provoke debate, especially about whether a machine can bless you.

That kind of left me speechless, so I turned to a video of the robot (it’s in the first link), hoping for a little drama. Sadly, all that happens is that its hands light up. I was hoping lighting bolts would shoot out of its hands. Now that might make me feel I’d been blessed.

Britain: The church of England isn’t installing robots, but it is planning to add a digital dimension to its collection plates. It’s trying out contactless payment systems in 40 churches—if, that is, it can get around the problem of how to pick up a signal through the massive stone walls of those ancient churches.

May the robot bless it in any of five (or eight) languages and help it find a strong signal.

China: A Buddhist temple in China now has a robot monk that can chant mantras and explain basic Buddhist beliefs. I have no idea what it said in the video clip I just linked to, but the listeners thought it was pretty funny.

Canada just introduced its first—in fact, anyone’s first—glow-in-the-dark coin. It’s worth $2. Canadian dollars, in case that isn’t boringly obvious. If you turn off the lights, the coin’s northern lights glow green and blue.

We can only wish them luck. Impure thoughts can travel through walls—yea, even through those of massive stone temples (or churches, not to mention the flimsiest bedroom ones)—and are extremely hard to avoid.

Back in Britain, politicians are using WhatsApp to plot against (or possibly even for) each other and to make deals. Being electronic and all, the messages are highly leakable. So far, most of the leaks seem to be deliberate, but one MP, Angela Rayner, apparently forwarded a message to the wrong group, after which she apologized for “being a cow.”

I’d heard politicians were out of touch but honestly: Cows don’t use smart phones, Angela. The little buttons are too small for their hooves.

As long as we’re back in Britain, let’s stay a minute and drop in on a squabble of authors, even if only one side is squabbling. Joanna Trollope ripped into J.K. Rowling for using Twitter. She said it was a threat to the literary industry.

“Creating this mass following and tweeting several times a day is like wanting to be…Kim Kardashian,” she told the daily Mail. “Some writers like JK Rowling have this insatiable need and desire to be out there all the time, and that’s entirely driven by their ego.”

And talking to the Mail? That’s driven by a desire to engage in the most high-minded literary discussion, because that’s what people buy the Mail for.

Rowling (wisely) hasn’t bothered to respond, but all the way down here in Cornwall I heard her rolling her eyes.

And finally, everywhere: Or everywhere Gmail’s fingers reach, anyway. Google’s launching Smart Reply (it’s actually a relaunch, but never mind that)–an automated reply system that reads through your email and suggests answers you might want to send. According to Wired, “Google is assuming users want to offload the burdensome task of communicating with one another.”

I’m sure we do. I’ll have my robot contact your robot and they can meet for coffee. You and I don’t need to be involved at all.

92 thoughts on “High tech news from around the world”