The Danish concept of hygge–roughly translated as coziness; the promotion of well-being–has made a big impression on Britain, at least if you believe the newspapers and  marketers. I can’t say it’s had an impact on my life, but I won’t promote myself as typical of anything much, except possibly stubbornness.

Still, the publicity around hygge‘s drawn tourists to Denmark, so VisitScotland thought they might be able to cash in by adapting the idea. To Scotland, of course. So, quick, what’s the Scottish version of hygge?

Well, it’s not hygge, they knew that much, and they knew they needed more atmosphere than they could pull out of an English word. So someone ran to the nearest Gaelic dictionary and found the word còsagach. Which is pronounced a lot like còsagach, Sorry, I don’t know Gaelic. If the Scottish version of Gaelic’s anything like the Irish one, the letters don’t communicate much to an English speaker.

VisitScotland, apparently (and sadly), knows about as much Gaelic as I do. because experts say the word’s more likely to be used about wet moss or a wet, mossy place than about anything cozy. Unless you consider wet moss cozy.

It can also be used about fibrous ground or a place full of holes or crevices.

A very secondary definition is snug, warm, sheltered, etc., but that comes from a dictionary that’s some hundred years out of date.

So visit damp, cozy Scotland today. Spend money. Have a memorable experience. And stay away from out-of-date dictionaries for languages you don’t speak. They’re as dangerous as thesauruses. Or maybe that’s thesauri. I’d look it up but I’ve developed an irrational terror of dictionaries. 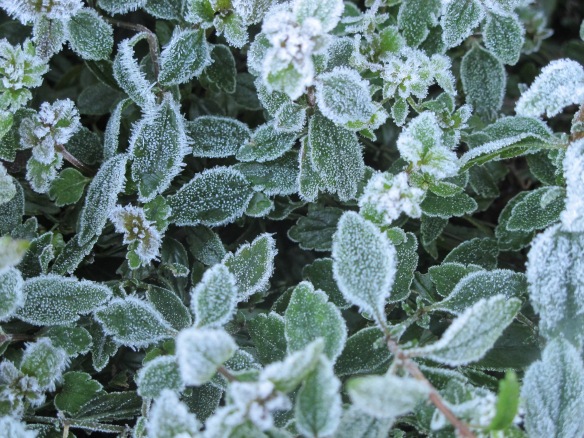 Irrelevant (but in season) photo: frost.

Example 1. Starting in January, China banned the import of plastic waste, saying that a lot of it is too hazardous to process. (Anyone see a bit of irony there? I don’t. I’m just asking.) Since 2012, Britain’s shipped two-thirds of its total plastic waste exports to China—something along the lines of 2.7 million tons of the stuff.

So what’s Britain going to do with all the plastic its fleets of recycling trucks have been  collecting with such ecological fervor? Recycle it here? Ban plastic packaging? Use it to backfill Stonehenge?

Well, in December—which strikes me as kind of late to come up with a plan—someone asked the secretary of the environment, Michael Gove, about it and he said, “I don’t know what impact it will have. It is…something to which—I will be completely honest—I have not given it sufficient thought.”

So that’s our plan.

We’ll give him half a point for honesty. Then we’ll take it away for cluelessness.

Example 2. A slow-burning fuse of a story either exploded or fizzled out, but I can’t figure out which.

The government was under pressure from a parliamentary committee to publish its assessment of Brexit’s economic impact on Britain. (In case you need a translation, Brexit is Britain exiting the European Union. A lot of people are worried it’ll crash the British economy.) The government resisted. Sorry, it said, but the assessments were too sensitive to be seen by mere members of parliament.

Okay, MPs could read them, but first the government would have to bury them under six feet of plastic waste and the MPs could only read them after sundown, using a flashlight with a single, second-hand AA battery, and they mustn’t disturb the plastic waste because although the government still doesn’t know what to do with it, it might need to know which pieces were dumped first.

I exaggerate only slightly.

But David Davis, the secretary of state for exiting the European Union, assured the committee that the government had 58 studies that went into the question “in excruciating detail.”

Then in early December, Davis told the committee he didn’t have any detailed information to publish. At all. He never had. They’d misunderstood him.

What about an assessment of the economic impact of leaving the customs union? someone asked. Was one of those hanging around somewhere?

Um, no. “Not a formal, quantitative one.” The assessments didn’t “have numbers attached.”

I’d like, since this is a public forum, to let Dave know that it’s okay. If he’ll just write a general statement and I’ll make up some numbers. We can paste them in anywhere. Because after you’ve seen a few numbers, they all start to look alike.

A quick P.S.: A BBC Radio 4 news story quoted Davis as saying that he doesn’t have to be intelligent to be a good negotiator. He doesn’t even have to know much, he just has to stay calm. When I wrote this (I generally write these posts well ahead of time; it keeps me marginally sane), he was still doing an admirable job of staying calm. And, I’m reasonably sure, of knowing very little.

For the record, both Davis and Gove are long-time politicians, but somehow or other they’ve managed to bring a broad spectrum of amateur qualities to their current jobs.

Public statements are clear and to the point

Train fares went up on January 2. It was the biggest jump in five years, and since the fares are already high and follow a formula that sets a world standard for incomprehensibility, and since train service in many areas is godawful, passengers are ready to chew up the seats in frustration.

So how did the train companies defend the fare hike? An industry flak-catcher said it showed the industry was trying to keep down the cost of travel.

A reporter asked if the companies were taking any risk at all, since (to simplify slightly) funding comes from the government and profit goes to the companies. The flak-catcher said, “Rail companies operate under contract and they honour the terms of their contracts and provide for things to happen in different circumstances. That operator will continue to make payments until 2020 and then the new operator will continue to make payments.”

I don’t  know about you, but as long as they provide for things to happen in different circumstances, I’m happy.

The police have a quiet word with Jesus

This raises a number of questions. One is what you have to wear to be dressed as Jesus. This particular guy was wearing a sheet. How did anyone know he wasn’t dressed as a ghost? Or one of the apostles, who would’ve dressed roughly the same way as Jesus?

Another question is what a quiet word is. It’s a very English thing, that’s what it is. Or possibly a British one. I lose my way in some of this stuff. It’s the solution to any sort of public awkwardness, and it may or may not be effective. If it’s not, it doesn’t matter, because the next public awkwardness will be handled the same way.

The final question is why I don’t give you a link. It’s because the story was in the Western Morning News and although they do publish online I can never find their stories.

One of the cops involved said the incident had scarred him “for about an hour.”

Everyone loves a feel-good story

A ten-year-old left his waterproof video camera on a beach in Yorkshire and the tide carried it 500 miles across the North Sea to the German island of Suderoog,

There’s an umlaut over the U–they like umlauts on islands in Germany–but we’re in the middle of an umlaut shortage here so we’ll have to do without one. Just make your pronunciation umlautish if you can.

No, an umlaut isn’t something from Willy Wonka and the Chocolate Factory. It’s two dots that go over a U in German for reasons I don’t understand since I never learned German. I’m sure that has something to do with the umlaut shortage. It’s hard to study German without them.

The island is a bird reserve with either one family or only two people living there (I read several stories and ended up knowing less than if I’d read one). Either way, I’m guessing they don’t have a lot to do in the evenings, so they took a look at what was on the camera and found some people fooling around on the beach and then the first few minutes of the camera’s trip—water, basically.

They posted something about the camera on the bird reserve’s Facebook page and eventually located the kid’s father. The camera’s owners have been invited to come pick it up, but they can only get there by boat from the mainland and they can’t stay overnight. And they have to bring their own umlauts.

At least one artist takes his metaphor seriously

This happened in Belgium, not Britain, but it’s a good story. And both countries start with a B. It’ll do.

A—well, I guess we’ll have to call him a performance artist chained himself to block of marble to demonstrate the inescapable burden of history, including the history of art, which he was trying to free himself from by chiseling away at the stone.

After nineteen days, he had to be cut free.

Every fascinating moment was live-streamed. I’m happy to say, I didn’t watch it and I haven’t looked for a link. If you want to watch all nineteen days of it, I figure you’ve got the patience to find it yourself.

The story led me to realize that one nice thing about writing as opposed to performance art is that when you get trapped by your own metaphors it’s not quite as embarrassing.

Someone from Wolverhampton decided to put his head in the microwave and have his friends fill it with cement. It being the microwave, not the head, in case that needs clarification. When they realized he was having trouble breathing (no, apparently this didn’t occur to any of them ahead of time), they poked an air tube in.

How? No idea. Every way I try to imagine doing this ends up with the breathing tube clogged with cement. Lucky thing I’m not one of his friends.

The BBC story mentions that the microwave wasn’t plugged in. I mention that in case you decide to try this and it’s not in the instruction book.

Why’d they do this? It wasn’t performance art and no metaphors were harmed in the process. They wanted to post the video on YouTube.

It took five firefighters an hour to get him loose, and they needed help from their technical rescue team to get the microwave apart.

Some people have trouble letting their pets go

Okay, this one’s pretty grotesque and I wrestled with what passes for my conscience over whether to use it.

Someone from Dundee offered to sell a rug she’d had made from her dead dog because her new dog kept trying to hump it. I’m not sure this tells you anything about British culture, but it did happen.

The British really are very polite. Until they’re not. Because that’s the thing about polite people: When they lose it, they don’t have a wide range of back-up  behaviors. You know, things like saying, “Hey, asshole, don’t push.” Which isn’t polite but is well short of bloodshed.

Some people are so polite they’d find it hard to say, “Excuse me, but would you stop pushing, please?”

So in October, either two or three people on a train near London got into an argument over a phone call. One man was talking one the phone loudly, one man was complaining about that, and the third man–well, I don’t know if he did anything other than just sit there, but he was a friend of Guy #1’s, so he had a kind of peripheral involvement, so when an argument broke out, Guy #2 leaned over and bit Guy #3’s ear.

Job done. Guy #2 went back to his seat. Quite possibly with a real sense of having done the right thing.

47 thoughts on “Stuff that happens in Britain”