At the risk of injecting a dangerous note of optimism into these updates, a new blood test looks promising. It might–emphasis on might–be able to pick up traces of Covid-19 a day after a person’s been infected. That would be several days before symptoms show up and most importantly (there may be a small question mark involved here) before a person’s contagious.

That’s four days sooner than any existing test can pick up the beast.

It’s been developed by Darpa–the U.S. military’s Defense Advanced Research Projects Agency–by the folks who usually work on diagnosing germ and chemical warfare poisoning. The test’s been rushed to the Food and Drug Administration for fast-track approval. If it is approved, it’s expected to be available in the U.S. in the second half of May.

Possibly. The fine print is that approval isn’t guaranteed. And they won’t know how early it can pick up an infection until the test gets approval and they can gather data. And I don’t know what the plan is about making it available elsewhere. But if it works and if it’s approved and if it’s widely enough available, it would mean pre-infectious people could be quarantined and the transmission chain could be broken. And I could finally do my own damn grocery shopping. 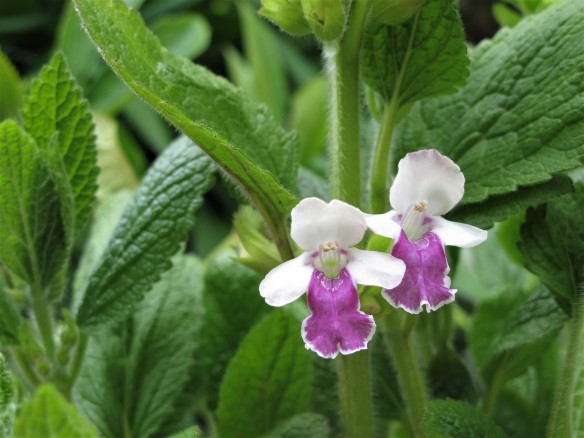 Irrelevant photo: A whatsit plant. We got it last year and whatever is it, it survived the winter.

Two other antibody tests are in the works, one from Roche and one from Quotient. The Roche test has gotten FDA approval. Quotient is in the U.K., so the FDA is irrelevant. It says its screening machines could process up to 36,000 tests per day and give results in 35 minutes with 99.8% accuracy. The snag? Both tests are lab-based. They can’t be done at home.

With a whole lot of fanfare, the British government announced that it had met it’s (completely arbitrary) goal of testing 100,000 people a day by the end of April. Some of those tests hadn’t been processed yet, mind you. And others hadn’t actually reached anyone. In fact, some were sent out without return envelopes. And only 7% of the 31,000 for care home staff and residents had been used by last weekend.

I mentioned that in an earlier update, but the details have gotten more absurd, so I thought it was worth repeating.

And you know, a number’s a number, so sound the trumpets, please, bandmaster.

When last sighted, the daily test number had dipped below 80,000.

One of the mysteries of Covid-19 is being called happy hypoxia: It involves patients whose blood oxygen levels are so low that they should be unconscious but they’re talking, checking their phones, and generally saying they’re comfortable. Which doesn’t make their blood oxygen levels less dangerous, only mystifying.

How are people coping with the pandemic? Some 300,000 people in Britain have quit smoking.  And online searches for puppies have gone up by 120%. The Dog’s Trust is begging people to think about how they’re going to deal with the dog when real life picks up again.

In a rare display of good sense and global cooperation, a global alliance is expected to pledge $8.2 billion for Covid-19 research and the equitable distribution of vaccines and treatments. Stay tuned. I’ll let you know more when and if I hear about it.

Can we talk about something else?

Police in Kent got a call about a big cat running loose, so they called up a helicopter and an armed response team and went looking for it. They found an 85-year-old sculptor and the life-size tiger that’s been in place for 20 years without scaring anyone until now.

One cop figured it was all because a of a recent Netflix series about big-cat ownership in the U.S..

In the interest of making fun of English place names, I should really mention the location. This happened near Underriver, in Ightham. According to all the laws of the language, Ightham should be either  unpronounceable or leave your tongue twisted back on itself and begging for rescue. How do they deal with that locally? They pronounce it Item.

And yes, English does have laws. It also breaks them anytime it the mood takes it.

And Underriver? How are we supposed to understand that? According to Wikipedia, which may or may not know what it’s talking about at any given moment, the name comes from old English and means under the hill.

If I really had to, I could also tell you how to report potholes in Underrriver. It’s very useful having me around.

80 thoughts on “The pandemic update from Britain: hope, hype, and a tiger running loose”