The Guardian interviewed past British health ministers about their experiences. The best bit of advice came from Kenneth Clarke: “Get the prime minister to take as little interest in the subject as possible.” The best demonstration of cluelessness came from Jeremy Hunt: “I was gobsmacked to find that 150 patients a week die in the NHS because of treatment errors. Then I discovered that this was actually true all over the world, it’s what happens in medicine.”

Ah, Jeremy, it does me good to see that you came into the job with a real grounding in the subject.

Medical staff from the St. Peter Hospital turned out to meet Belgium’s prime minister, Sophie Wilmès. As her car rolled majestically between the two evenly spaced lines of people wearing scrubs, they turned their backs. It was to criticize staff shortages, low pay, budget cuts to health care, and the use of less qualified staff to do part of nurses’ jobs. I don’t know if it’ll change government policy, but it’ll sure as hell change the way the government organizes Wilmès’s public appearances. 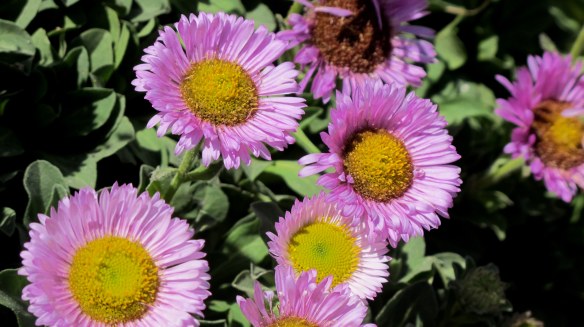 Irrelevant photo: These are called, um, something. I always forget. They’re wonderful to touch, though.

Britain’s wrestling with the question of whether to reopen schools in June. So what does science have to tell us?

Only a few useful studies have been done, and they point in opposite directions. An Italian one from the town of Vo, which had a major outbreak, didn’t find a single kid under ten who’d been infected, even though plenty of them lived with people who were sick. Studies from Iceland, Norway, and Korea have similar findings.

There’s always a but, isn’t there?

A British Office of National Statistic study looked at 10,000 people and found that the same proportion of people tested positive for the virus across all age groups. Or at least it found “no evidence” of differences, which may or may not be the same thing. (There’s always an or as well as a but. Or there is around here.) If you’re willing to trust a non-professional’s translation of that–and I admit, it’s a risk–kids get infected at the same rate as adults.

A German study seems to back that up.

So is it safe to reopen the schools? I have no idea. If serious testing and contact tracing were in place, they could make a better argument for it.

Has the government studied the situation? It’s not impossible, but studying the situation has a way of bringing out all kinds of inconvenient information, so I wouldn’t put a lot of money on it.

So what’s happening with contact tracing? You would have to ask, wouldn’t you? A company that has a contract to recruit contact tracers emailed applicants to say that the jobs they were applying for had been put on hold because the government’s considering an alternative to the app that it had bet its chips on.

At which point the Department of Health said the email was wrong. The chips are still on the existing app. And the company that sent the email said it was all a miscommunication.

So how’s the app performing on the Isle of Wight, where it’s being tested? Slightly under half of the population has downloaded it, although that may include people who downloaded it twice (that would’ve been me, but I don’t live there and don’t use a smartphone) or who are from the mainland and so don’t count. Still, it’s a better take up than in Singapore (20%) or Australia (25%).

On the other hand, it’s an early, dumbed-down version of the app. It only asks about two symptoms. If a person’s answers send up red flag, their contacts get a warning. But there’s no way for the person to enter a test result (assuming that the government gets its testing centers working well enough for the person to get their results back in a reasonable time). So contacts get warned but then they’re left to wander around wondering what they should do. Isolate? Go to work? Write their wills?

The Department of Unlikely Allies reports that a hundred people (or several hundred, depending on your source) demonstrated in London on Saturday, protesting (variously) the lockdown, 5G, the fake virus, contact tracing, and the vaccine that doesn’t exist yet, although to be fair they didn’t say that it did, they were just getting their licks in in advance.

The protest was called by the UK Freedom Movement, which circulated a flyer on Facebook, saying, “We say no to the coronavirus bill, no to mandatory vaccines, no to the new normal and no to the unlawful lockdown.”

It called sixty mass gatherings around the country, but it’s not clear how many of them gathered. A dozen people micro-massed in Southampton.

The group Hope Not Hate, which “uses research, education, and public engagement to challenge mistrust and racism,” said, “It is notable how diverse the people leading the groups appear to be, with some groups moderated entirely by vegan activists, others by committed Brexiteers and still others by full-blown conspiracy theorists.”

If I can translate that, these are people who wouldn’t normally talk to each other. Lockdown’s driving people to discover all sorts of new possibilities. Isn’t it wonderful?

Overall, a recent poll shows that the British public not only supports the lockdown but is uneasy about easing it.

After the leak of a report indicating that the government was thinking about freezing public sector wages, Boris Johnson has said no one has had that thought, even in passing. I only mention that because I caught a few drops of the leak and squeezed them out here, so I thought I should mop them up. I should also get out of the metaphor before I drown in it.

A new study makes singing look–well, nothing’s safe these days but as safe as anything else is. Anecdotal evidence had been pointing to it as a great way to spread little virii.

The anecdotes? A number of choirs popped up as virus hotspots, leading to the logical assumption that singing caused the spread. It’s common sense. Singers breathe deeply and exhale powerfully, so why wouldn’t they both spread and take in better than your average amateur breather?

Well, because it doesn’t work that way–or it doesn’t seem to. I won’t rule out a contradictory report coming in next week. In the meantime, though, a specialist in fluid mechanics experimented to see how far singers and instrumentalists could shoot air, with all its virus-carrying droplets and aerosols.

Singers propel air about half a meter–maybe a foot and a half. His best guess is that the choir outbreaks came from socializing before or after singing, although the director of one choir swore they’d all been careful about both distance and sanitizing their hands.

The U.S. Navy reports that thirteen sailors who’d apparently recovered from Covid-19, testing negative, tested positive for a second time. The same thing has been reported in South Korea. It’s possible, but far from certain, that the disease becomes dormant in a person’s system and then reactivates.

The Department of Greed and Despair wishes to inform you that some of the protective gear that’s being sold comes with phony documentation. So as people return to work, they can’t know if they’re being handed workable protective gear or not.

And finally, from the Ray of Hope Department, two vaccine updates:

A vaccine being worked on in the U.S. shows that the vaccine did create antibodies in eight people in the test, although this stage of the test is about safety, not effectiveness.

Another vaccine being tested in Oxford protected monkeys against pneumonia and the most severe symptoms of the virus, but it hasn’t been tested in humans yet.

66 thoughts on “Pandemic reports from the Departments of Health, Bad Planning, and Unlikely Allies”