With the number of daily Covid-19 deaths falling, English schools are set to open on June 1, but not for all age groups, just for a couple. And not Scottish, Welsh, and Northern Irish schools, which make their own decisions. And not necessarily all English schools, because local governments–some of them–are digging their heels in and saying, forget it, we’re not opening. And not all kids, because parents have a get-out-of-school-free card and can look grim and keep their kids home if they want to.

But the government still says the schools will open, and if this is starting to sound like a round of The Cheese Stand Alone, that’s because it sounds like a round of The Cheese Stands Alone. And if you have no idea what I’m talking about, it’s a kids’ game that peels people away one by one until the cheese is left in the center of (if I remember right–it’s been a long time) the circle, feeling very lonely indeed.

I thought I might have made that up but I checked with Lord Google, who assured me that I haven’t hallucinated my entire childhood. It’s a children’s game and song. One of the related questions that’s asked so commonly that it comes up all on its own is, “What does the cheese stands alone mean?” 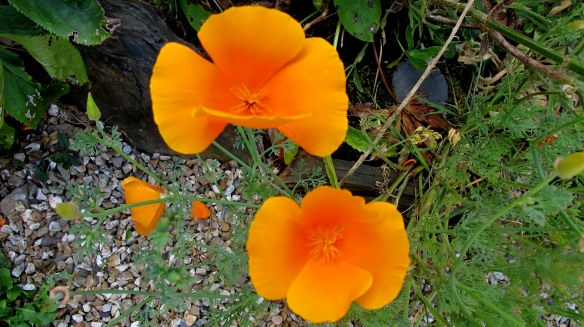 Irrelevant photo stolen (twice now) from an old post: California poppies. Californians or not, they grow well in Cornwall and once you get a few going they’ll self-seed. Generally in places where you didn’t want them but they don’t object to being moved.

The question’s too deep for us here at Notes. We’re going to pretend we already know and skim right over the top.

At the beginning of the week, it looked like schools that didn’t open would have a fight on their hands. Now it looks like they won’t. The government isn’t in a position to fight this one.

What’s happening with the contact tracing app that’s going to make it safe to ease Britain’s lockdown, even if it limps in some weeks after the lockdown’s already been eased?

The tale gotten more interesting in the day or two.

The government hired a couple of companies to hire a bunch of people to trace a whole bunch of contacts to control the virus. We’re not playing The Cheese Stands Alone now, we’re singing, “She swallowed the spider to catch the fly.” The health secretary, Matt Hancock, said that the spiders (those are the contact tracers) are going to have rigorous training,. With detailed procedures. Designed by experts.

Better yet, they’ve “stepped up to serve their country.”

They also–and I say this with no disrespect to the people involved–stepped up to get a badly needed paycheck.

One man who was hired broke cover to talk (anonymously) about the rigorous training. His day of online training started with an hour and a half of people typing, rigorously, to the trainer, “I can’t hear anything.”

The trainer assured them that the problems were normal.

Eventually either everyone could hear or enough people could hear that they began asking questions. The trainer told them he couldn’t answer them all–there were too many trainees.

“After the full day of training,” the now-trained trainee said, “people were still asking the most basic things.”

Someone asked what to do if they talked to someone whose relative had died. They were told to look on YouTube for videos about sympathy and empathy.

After that, the trainee was a fully qualified contact tracer, scheduled to work the next day. He logged in and got a message telling him he’d get instructions on what to do.

He waited all day. Nothing happened.

He got an email telling him not to worry, he’d be paid anyway. And he’d get more training soon.

Another trainee said she hadn’t been able to log in for three days.

It’s all under control, folks.

In South Korea, they’re playing professional football again, but to avoid spreading the virus there aren’t any fans in the stadium, so before a recent game a company offered to place thirty mannequins to the stands. It would make them look lived in. It would be great.

The game was shown and people noticed that some of the mannequins were holding up signs for X-rated websites. And a few noticed that they all looked like sex dolls.

What does a sex doll look like? Sorry, we’re well outside my sphere of expertise here. But not outside of everyone’s. If you gather enough people, someone will be in possession of whatever obscure piece of information you really don’t want people to know. So it went public: Those were sex dolls in the stadium.

The company that supplied the mannequins turns out to make sex toys.

FC Seoul–the team whose stadium it was–has apologized and promised never to think about sex again.

55 thoughts on “Cheese, spiders, and, um, let’s not put that in the headline: it’s the pandemic update from Britain”