The Salvation Army was founded as a London mission in 1865, offering food and shelter to the down-and-out, the poor, and the very, very drunk. The Skeleton Army was founded by people who enjoyed a good drink and a fight, and in the 1880s and 1890s it harassed the other army.

The Salvation Army came first, so let’s start with them: According to one account, its goal was to wage war on poverty and religious indifference, which testifies to humanity’s long and history of waging war on things that can’t be shot, slashed, or speared.

And there I was thinking all that war against abstractions and inanimate objects started with the U.S. declaring war on drugs.

Never mind. The Sally wasn’t the first organization to fall in love with a bit of overblown rhetoric, and it quickly took on a military structure, complete with uniforms, recruits, ranks, and marching bands. 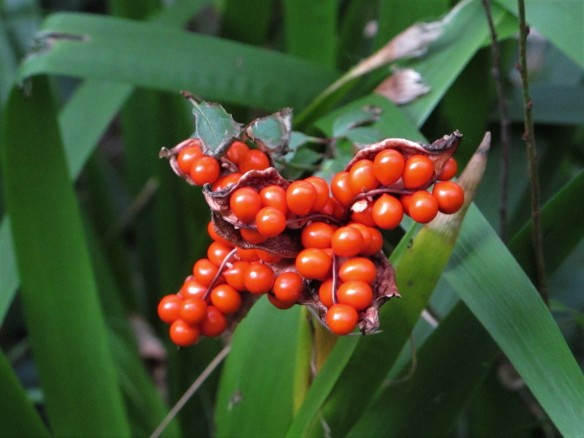 Irrelevant photo: An October seed pod. A friend thinks they’re from an iris, in which case I’ll guess a yellow flag, which grows wild.

The Sally’s own website doesn’t talk about warfare but about saving souls and relieving “the Victorian working classes from poverty. In Booth’s eyes [Booth being the founder], this involved morality, discipline, sobriety and employment.”

In other words, unlike the unions and proto-unions of the period, they didn’t see the causes of poverty as low pay and killingly long hours, they were immorality and drinking.

Not to mention gambling and salacious entertainment.

Within the Salvation Army, women’s ranks–and this was radical for the period–were equal to men’s, and women played a powerful role in the organization. Although having said that, it was started by two people, Catherine and William Booth. I’ve put her name first because I’m like that, but I’m a minority of one in that. He’s credited as the founder and Catherine sometimes gets a mention–and not always by name but just as “his wife.” She may have played a secondary role–I’m not sure–but even if she didn’t, he was the Methodist minister in the family, and if that wasn’t enough he carried a Y chromosome, along with the physical oddities that follow from it, so he walked around with neon arrows pointing him out as the important half of the couple.

Still, I’m writing that from a contemporary point of view. For the time, the organization was startlingly equal.

The world they campaigned in was a brutal one. Industrialization meant cities and towns had grown massively, and people’s hours, pay, and working conditions were, literally, killing.

And in spite of the way the language is changing, literally there doesn’t mean figuratively. It means the hours, pay, and working conditions killed people. And crippled them.

Housing was overcrowded, germs hadn’t been so happy since the Crimean War, and beer and gin were cheap, so people drank. Sometimes that was all that got a person through one day and into the next.

Into that setup marched the Salvation Army, not to quietly establish soup kitchens and wait for people to come eat and get preached at but to march down the street, thumping the drum, playing the tuba, waving banners, and preaching against the evils of et cetera.

Et cetera can be extremely evil if left unchecked.

This won them both recruits and enemies. Plenty of people wanted a drink and a dance and a fight.

Along England’s south coast, this response coalesced into a group that called itself the Skeleton Army. Chris Hare, a historian from Worthing, one of the Skeleton hotspots, traces their origin to groups of Bonfire Boys–working class young men who raised hell on Bonfire Night, as well as on Mayday and any other occasion that gave them the opportunity. They didn’t bother with ranks or uniforms, but they did sometimes wear yellow ribbons in their caps or sunflowers in their buttonholes.

No, I don’t know how either. Maybe sunflowers were smaller back then, or buttonholes were tougher.

They also took the Salvation Army’s songs and wrote rowdy lyrics to them. Fair enough. The Sally had taken popular secular songs and reworked the lyrics to suit their purposes, so they were only stealing what had already been stolen.

Skeleton mobs attacked the Salvation Army, throwing paint-filled eggs, dead animals, burning coals–whatever came to hand. Except for the eggs. Those took planning, because getting paint into an egg and keeping it there long enough to throw? That takes work. In fact, how you do it is a deeper mystery than anything the established religions have yet cooked up. But never mind, the eggs appear in more than one telling and seem to have been real.

Where were the town’s respectable people while all this was going on? Unhappy not about the Skeleton Army but about the Sally. Individually, they wrote letters to the newspapers, worrying that the Salvation Army would give their towns a bad reputation and drive visitors away.

As for the religious establishment, it preferred its religion inside the church, not bothering people on the street corner. And landowners and industrialists had an interest in keeping their workers drunk and if not happy at least not demanding higher pay and forming unions.

The Salvation Army was anything but revolutionary, but it offered enough prospect of change to worry the powers-that-were.

Collectively, they were glad to look the other way when the Skeleton Army broke up Salvation Army events.

To the extent that the police got involved, they were likely to blame the Salvation Army for any uproar. In Worthing, when one “Salvationist applied to the bench for a summons against those who had assaulted him,” he was told,” ‘You know what you do provokes others to interfere with you, and then you come to us for protection.’ ”

In Eastbourne, the mayor and the brewers endorsed the Skeleton Army. In Torquay, the local government banned marching music on a Sunday. It attracted troublemakers, so they arrested the marchers.

Attacks on the Salvationists–as the articles I’ve read call them–increased, and the women, especially the women in authority, were the primary targets.

One woman, Sussanah Beaty, was killed.

There were riots in Exeter, Worthing, Guildford, and Hastings, and brawls in 67 towns and villages. From the 1880s to the early 1890s thousands of the Sally’s officers were injured.

But by the early 1890s,  the police became more likely to arrest attackers. Opposition began to die down and the skeleton army faded away.

After that, the story isn’t half as interesting, so we’ll abandon it there.

40 thoughts on “The Skeleton Army and the Salvation Army”