There’s good and bad news about the way Covid mutates, and it’s all wrapped around the same bit of information.

Like most non-experts, I use the word mutate loosely. If something genomeish leads to change, I think it’s a mutation. Which goes to show you what I know.

Covid, it turns out, doesn’t just mutate, it also recombines, meaning it mixes large chunks of its genome, not just single genes. If a mutation’s a typo, recombination is a cut-and-paste error, dumping a largish chunk of text in the wrong place. And while the virus proofreads typos fairly well, it doesn’t catch cut-and-paste problems as effectively.

I’ve had that problem myself. I still wince at something quite horrible that I let go into print because the spelling was right and my eye didn’t pick up the change in meaning. And I’m larger and (I like to think) more complicated than a virus.

Most of those recombination errors, like most mutations, make a mess and that particular virus doesn’t get to leave little virette progeny behind. But some of them work and the virus changes. 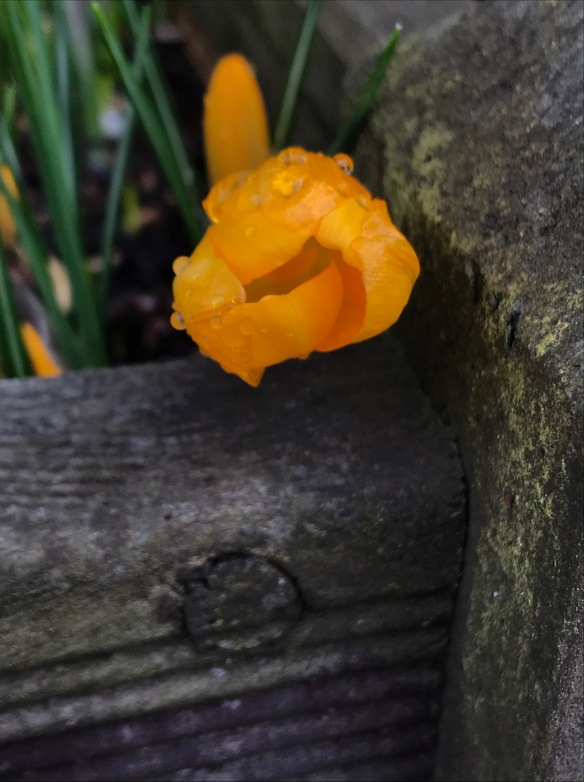 Irrelevant photo: One of Janey’s crocuses.

Is recombination what’s happening with Covid? Possibly. The Kent variant has more than a dozen mutations and they seemed to appear all at once. Emphasis on seemed. A lot of what goes on happens in the kitchen while we’re out front cleaning the dining room. Feng Gao, a virologist from China, says we don’t yet have proof of recombination. “Diversity, no matter how much, does not mean recombination. It can well be caused by huge diversification during viral evolution.”

So let’s not get carried away with this. We’re dancing at the edges of what’s known. But (damn, that tune’s catchy, so I’ll do a few more steps) recombination may be how viruses that infect one species jump to another species: by swapping a bit of genetic code .

But the good news is that experiments with a mouse coronavirus show that blocking a single enzyme keeps the virus from correcting its typing errors and recombination events happen much less often. If this holds for Covid, the right drug might be able to block recombination and (or maybe that should be or) push the virus to mutate so badly that it ends up in something called error catastrophe–basically, the evolutionary equivalent of falling off a cliff. While dancing to that catchy little tune.

As a way to treat Covid, blocking the enzyme could make antiviral drugs more effective.

The enzyme goes by the name of nsp14-ExoN, which isn’t particularly catchy. If we’re going to be spending time with it, it needs a nickname. But whatever we call it, it’s common in coronaviruses, so if this works it opens up the possibility of curing other coronavirus diseases as well.

If Britain didn’t end up with the world-beating test and trace system Boris Johnson promised us–and believe me, it didn’t–it may have come up with a world-beating strain of Covid instead: the Kent variant; the variant I mentioned that has all those mutations. Sharon Peacock, the director of the Covid-19 Genomics UK consortium tells us it looks likely to sweep the world.

And unlike the test and trace system, we didn’t pay a penny for it.

The consortium is testing the genomes on a randomly selected 5% to 10% of all positive Covid samples in the country but aims to test them all in order to keep track of how the virus is mutating.

Which is better than nothing.

How much space would all the Covid viruses in the world take up if they could be packed neatly for shipping? They’d fill a Coke can.

They’d also fill a can of supermarket brand fizzy orange-flavored sugar water, but Covid’s a brand-name kind of virus. Coke it is. So in the scene where someone yells, “Don’t open the can!” for pete’s sake, don’t open the can. You know what happened when Pandora didn’t listen to the warnings?

I’m not telling. But I did give you a link.

More than half of all Covid cases are spread by people who have no symptoms. They may be less infectious than people who are sick, but they could well make up 80% of the total number of people carrying the disease. And they’re wandering through the world shedding viruses, not lying in bed at home.

A study by the U.S. Centers for Disease Control found that wearing two masks can reduce the chance of getting Covid by 90% or more. Yes, not just transmitting but catching the damned thing.

The study had its limits. It tested a tight-fitting cloth mask over a surgical mask, not two surgical masks and not two cloth ones, and it only looked at one type of cloth masks, although the world’s awash with different types just now. And as the article where I first read this put it, it also didn’t consider “men with beards or children.”

Does having children interfere with the fit of men’s masks more than women’s? Hard to say. The study didn’t test that.

To keep everything in perspective, an engineering professor says that the only reason to wear two masks is to get a better fit. But the masks most of us wear do fit loosely, so double masking might be worthwhile, no matter who’s right.

Two weeks after U.S. states introduced mask mandates (they haven’t all), the weekly growth in hospitalization rates dropped by 2.9% among people who are 40 to 64. After three weeks it dropped 5.5% among people 18 to 64.

Every so often, you’ll find someone saying that Covid’s no more dangerous than a bad outbreak of the flu. So do we have any figures on how much more dangerous it is?

Yup, some. The risk of death is 3.5 times higher. That number comes from comparing people who are hospitalized with the Covid against those hospitalized with flu. It ignores whatever long- term effects Covid has on the unhospitalized, so I’d say it’s undercounting. Still, it’s a number, and numbers help.

At least they help most people.

In case you think Covid’s only a problem for the old and the ill, not many of the hospitalized Covid patients had other illnesses and 21% were younger than 50. People under 50 made up 24% of the intensive care admissions.

As far as I can see, that doesn’t address the problem of how easily Covid spreads compared to flu. It only compares hospitalized patients.

Worldwide, the number of reported Covid cases is down for the fourth week in a row. Take a deep breath. The drop is uneven, it doesn’t count unreported cases, and we forgot to get a guarantee that it won’t go back up, but we have to take our good news where we can get it. This is good news.

Is there any news on curing the thing?

In a small study, a common asthma treatment, budesonide, cut the need for hospitalization and urgent care by 90%, and people who took it within seven days of showing symptoms recovered more quickly than the control group. Better yet, it cut the number of people with symptoms that lingered after twenty-eight days.

As usual, it was a small study–146 people–so it’s preliminary, but budesonide is a well-known and well-studied drug, which would speed the process if it’s adopted.

The U.S. Food and Drug Administration has approved a combination of two monoclonal antibodies that can keep high-risk patients from developing Covid that’s severe enough to hospitalize them. A similar drug had already been approved. Both take Covid antibodies and synthesize them so they can be given to patients as a drip.

And it’s that drip business that’s causing trouble. Initially, getting them from vial (or whatever they come in) into human took an hour. It can now be done in sixteen minutes. But some hospitals have been so overwhelmed they haven’t had time to deal with it.

A team of researchers in China has identified six drugs that the FDA has already approved for other uses that could be repurposed to treat Covid. They whittled that down from 3,769. They still need to be tested in the real world, but already having FDA approval for other purposes means that if they work they could be put to use quickly.

After that, the article went over my head, but it has to do with proteases and substrates, not to mention clades. Have fun.

New York software developer Huge Ma tried to make his mother a Covid vaccination appointment and discovered that not only did the city and state have different systems that weren’t talking to each other but that there were dozens of separate websites, each one demanding that you sign up a different way.

So he took a couple of weeks and made a free website, TurboVax, that compiles information from the three main city and state sites and sends information on available appointments to Twitter.

The difficulty of booking an appointment is one reason–although far from the only one–that vaccines are going disproportionately to white New Yorkers.

“It’s sort of become a challenge to myself, to prove what one person with time and a little motivation can do,” he said. “This wasn’t a priority for governments, which was unfortunate. But everyone has a role to play in the pandemic, and I’m just doing the very little that I can to make it a little bit easier.”