This has happened to me twice now: I was walking the dog—a lovely cluster of fluff and enthusiasm—when another dog walker stopped some 20 feet away and asked, “Is that a dog?”

I looked at her as if I needed to check. Half of me did it to play along with the gag and the other half did it because the question was so strange that maybe it wouldn’t hurt to check. Yes, she was still a dog. Small, I grant you, but so am I. It doesn’t change what we are.

I looked back up.

“Um, yes,” I said. Even the second time, when I knew better. 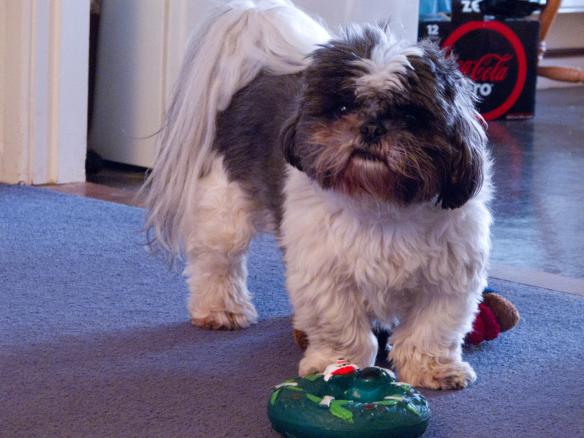 Would you have to ask if this is a dog?

The other person, both times, reeled his own dog in, explaining that the dog’s snappish with other males, although he’d be fine if my dog were a bitch.

By this time, I understood what the other dog walker saying—bitch, female; dog, male—but excuse me, you can’t call my dog a bitch, and while we’re at it, you can’t tell me my dog’s not a dog. I mean look at her, she’s down there wagging her tail. My cats don’t do that. You want bitch, buddy, talk to me.

But that little drama plays out in my head. When you live in a village you don’t run around starting wars on a whim. Or, yeah, some people do, but their wars enter to gossip chain and circulate forever. Think of it this way: The village keyboard has no Delete button. And whoever you just started a war with? You’ll run into them for the rest of your life.

I admit, I wouldn’t have started a war over this if I was still living in a city. It’s too silly, and I’m not that quick to fly off the handle. But living in a village colors the way I don’t say it. I kept the vague smile that had landed on my face I was first asked if my dog was a dog and I said, “Oh. That. Female. She’s female.”

At which point, both times, the other person let his dog approach and they gave each other a good sniff. The first time, the dog who would have been fine if my dog had been a bitch turned bitchy himself and snapped at her before being hauled off. Which goes to show you something, although I’m damned if I know what.

I won’t swear that any of this is particularly English. We have dog breeders in the U.S., and they probably talk about dogs and bitches, but no one in the States ever asked me if my dog was a dog. Not once.