J. wrote me early in the year, saying (among other, more interesting, things) that she needs to lose ten pounds of holiday weight. I almost wrote back to ask, “What’s a pound?”

It’s not that I’ve forgotten exactly, and it’s not that no one measures in pounds here. Like everything else about living in a country that isn’t at heart your own, it’s complicated.

In theory, most weights are still given in two systems, metric and imperial, to humor the folks who grew up calculating in a pre-metric world and are either too old or too cantankerous to switch over. Or in my case, too old, too cantankerous, and too mathematically incompetent. 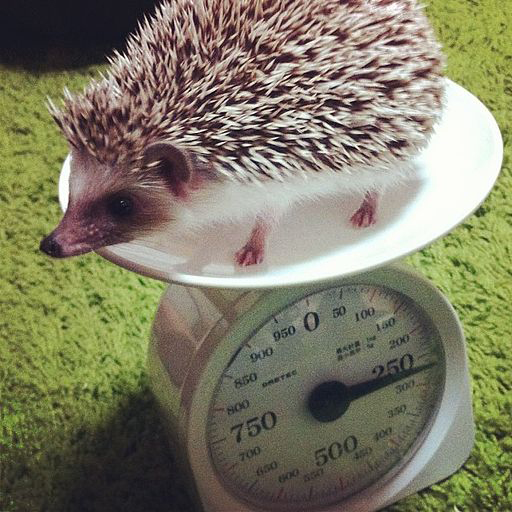 Right. That’s me, weighing myself. In grams and kilos. Photo by senov.

Our bathroom scale measures in both kilos (2.2 pounds) and stones (14 pounds). Stones are subdivided into pounds, so it’s not that the pound isn’t on there, just that it’s illegible. To make room for two ways of measuring, the manufacturer had to use small print. Insurance-form size print. But even if the print was large enough for me to read and therefore know that I was something stones and something else pounds, I’d still have to multiply the stones by fourteen, which I’m incapable of doing on the hoof and not interested enough to do with a calculator or a pen and paper. I mean, as long as your clothes fit, who cares?

Well, me, at least enough to step on, if not enough to work out the result.

A sensible person—or one who seriously cared to track her weight—would forget about pounds and switch to one or both of the new systems, but you might as well ask me to track my weight in tablespoons, or in cubits, because the new systems don’t mean anything to me. I look at the numbers. I think, I should remember this. And then I walk away, remembering only that I should remember. Numbers do that to me. I look at them and see an elaborate version of almost nothing.

I do have a kind of geographic memory of where the needle usually sits: halfway between two of the larger marks. When it creeps toward the one on the right, I’ve put on weight. When it creeps to the left, it’ll move back to the middle any day, so it doesn’t mean much.

What are the numbers that the needle sits between? I’m not being coy here; I honestly don’t remember. I mean, I still haven’t learned the multiplication tables. You expect me to know my weight in imaginary measurement systems?

But my weight in pounds? I could remember that. At least I remember what it was when I lived around scales that measured in pounds, because I understand in my body what a pound is. Maybe it comes from growing up with them—from measuring in pounds and feet and inches the growing amount of space I took up in the world. To the extent that I can guesstimate a kilo, it’s only in relation to a pound—twice as much with a little extra thrown in.

And a stone? Are you kidding me?

When I first started buying lunchmeat at the deli counter in our local supermarket (which no one but me calls a supermarket, but that’s a different tale), I asked for a pound. Because that’s also an amount of money, the kid behind the counter froze in front of his scale. Maybe I wanted a pound’s worth of lunchmeat. That’s a measurable amount, although not a hell of a lot, but no one asks for it that way. I said, “Half a kilo?” since in the essentially nonmathematical world I inhabit, that’s close enough to a pound to make me happy. He still looked as if he’d been swept up by a tornado and dumped back in math class: If lunchmeat A leaves display plate B at 10:45 and arrives on scale C weighing half a kilo, how long will it be before my manager yells at me for upsetting a customer?

“Five hundred grams?” I said, feeling as if I’d been swept up by that same tornado and dumped in some alternate universe where I could solve a math problem more easily that some other human being. It was destabilizing, but relief flowed over the kid behind the counter as visibly as if someone had poured it over his head from a bucket.

He weighed my five hundred grams, stuck the label on the bag, and handed it over.

To me, the vegetarian. But that, too, is a whole ‘nother story.

So I haven’t a clue how much weight I’d like to lose. Some of my clothes fit just fine, but the washing machine’s been selectively shrinking the smallest of my jeans. They’re not making denim like they used to. They are, sadly, making desserts exactly like they used to, and my body remembers them fondly. It doesn’t want to let them go.

What I know is this: I weigh something or other. It doesn’t really matter how much. When I stand on the scale, the needle moves and I’m reassured that I’m still present in this strange world of ours.