Nothing reminds me that I’m living in the British countryside quite the way crossing a ford does.

I know. Fords have been around ever since people and small rivers were first introduced, but even so the fords in our village make me think I live in Pooh Corners. And for the record, no, I’m not sure there were any fords in Winnie the Pooh, but there was a stream and—well, I don’t want to pretend I’m being reasonable about this. What I’m remembering, I think, is one of the illustrations, about measuring the height of a stream during a flood.

Funny what sticks with you from your childhood. 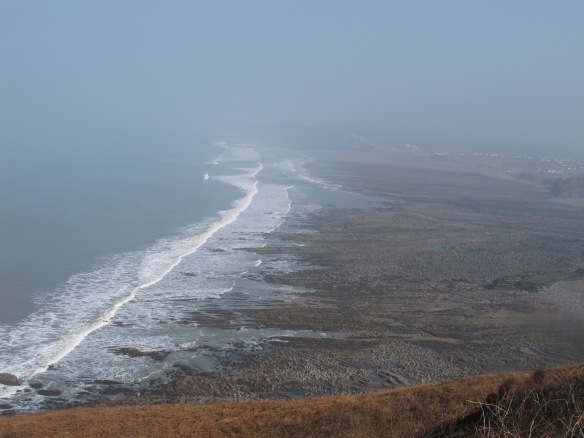 This all goes to show you what a New Yorker I am. New York City doesn’t do fords. In fact, it doesn’t do streams. As far as I know, many years before I was born, someone (or more accurately, some many) maneuvered all of New York’s streams into pipes and then paved them over. The city does have three big honkin’ rivers (or two, or maybe one, depending on what you count as a river and what you count as a straight), and that’s plenty, thanks.

When you grow up with pavement, not having streams seems natural. So much so that I used to wonder where streams came from. Not where rivers came from. They came from upstream, as any fool could see. In case you need further proof of how attuned I was to the natural world, I once looked into a huge hole in the street and was surprised to see earth and rock under the pavement. I don’t know what I expected, but scaffolding probably wouldn’t have surprised me. So living in Cornwall not only with streams but with fords? That’s exotic.

Wild Thing grew up in Texas, and her family used to spend time in Colorado. She swears that when they came to a ford and the river looked higher than usual, her parents would have her wade across to make sure it was safe for the car. She never got washed away, so I’m guessing these weren’t raging torrents. Her parents weren’t reckless or neglectful, but it’s also true that they never stopped her from exploring abandoned mine shafts, so I don’t have the impression that they were over-protective either.

In fairness, she wouldn’t have told them she was exploring mine shafts, but a different set of parents might have asked. Or discussed. Or at least warned.

Whatever the pluses and minuses of their approach, she came out of it with an enviable gift for gauging the depth of a stream, and that’s something I don’t have. I understand three levels: low enough to wade; higher than the waterproof part of my shoes; and ask Wild Thing before taking the car across. The first two are reliable. The third? It’s helpful only if Wild Thing happens to be with me. So far I’ve managed not to get swept away, which is why I’m sitting here typing this. I’ve turned back only once, and I probably I didn’t need to, but I figured it was better to wonder than to be wrong.

Years ago, some government agency set up gauges beside the fords. These look like gigantic rulers and go from 1 at the bottom to You’re in Deep Shit at the top, although in my city-bred opinion you’re in trouble by the time the water reaches 1, because for the most part the gauges sit serenely above the normal flow and I’d turn back long before the water reached them, even though at most fords that means having to back a long way. I’m good at backing a car. I’m not good at estimating fords. Give me a choice and it’s pretty clear which I’ll take.

I’m not sure what the gauges are for, really. Maybe so that, Pooh-like, we can measure the depth of the stream for no better reason than to know if it’s still rising. The valleys here are sharp and narrow, so the rainfall spills into the streams quickly. In a heavy storm, a stream that’s normally a trickle can rise to a torrent, especially if the ground’s already saturated. It can fall just as quickly as it rises, and I suppose a gauge could keep you amused while that’s happening, although you might be smarter to go back to your nice warm kitchen and wait. You could also look for another route if you’re driving. If you’re walking, the fords have foot bridges, so you should be fine. If the water comes up over that, you’d be smart to get out of there instead of watching the gauge.

In my city-bred opinion.

And unrelated to that, Notes has now been updated, with a new theme that looks one hell of a lot like the old one but should work on phones. In addition to that, it was going to have all sorts of added Googlery that would tell me if a gnat flew past your screen while you were reading it, and which would also reach through atmosphere and hijack unsuspecting readers, launching my stats to astronomical levels, but the whole thing went wrong and instead my posts stopped reaching most of you. The ancient Greeks called it hubris. So the googlery’s disappeared, everything except the new, barely discernible new theme is back (I hope) to where it started, and I’m toning down my ambitions. Or looking for another way to channel them.

Don’t worry about it.

If you have any trouble let me know. But if you get this, that probably means you’re not having any problems.

52 thoughts on “The British countryside and Winnie the Pooh”